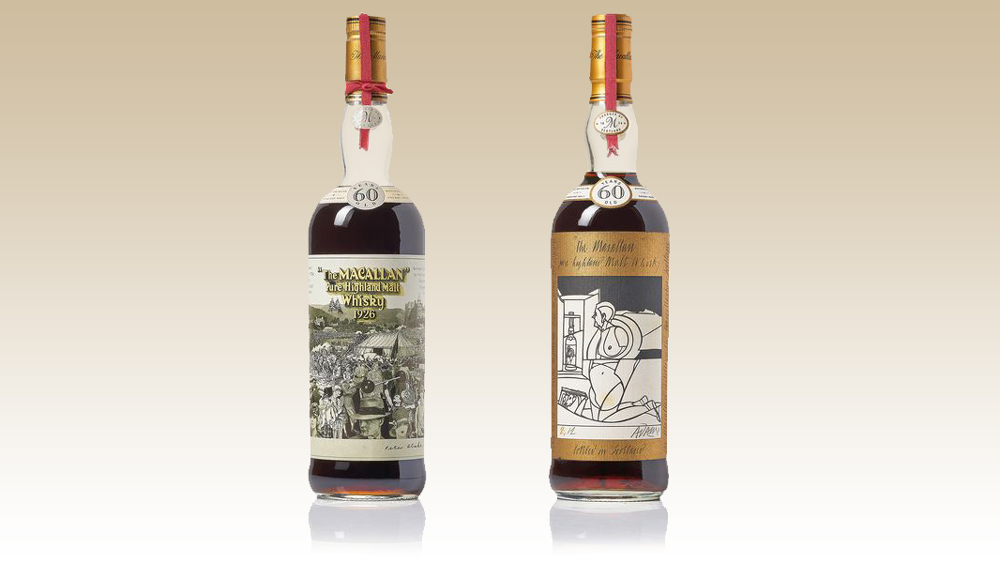 It took 60 years to mature the sherry-cask-aged whiskies comprising a two-bottle set of 1926 vintage Macallan single malts that sold for $600,000 apiece on April 25, 2018. Macallan whiskies have repeatedly performed well at auction, and this $1,200,000 retail price set a world record for the most paid for a set of twin whiskies. They were purchased by a private collector at the Dubai International Airport’s fine wine and spirits shop, Le Clos. To celebrate its momentous transaction, Le Clos is now offering a sweepstakes to win a trip to the Macallan distillery in Scotland.

But 23 days later, on May 18, a bottle of the 1926 Macallan single malt was auctioned at Bonhams Hong Kong for just over one million dollars, setting a world record for the most expensive single bottle of whisky ever sold at auction. But as dramatic proof that records are made to be broken, that notable achievement lasted but a few hours, because later in that same auction, another bottle, also from the 1926 Macallan vintage, went under the hammer for $1,100,000. Yes, a new world record was established, in just hours, for the most expensive single bottle of whisky sold at auction. This cements Macallan’s position as the most collectable single-malt whisky in the world.

Of course, these weren’t just any Macallan single malts. They were among just 40 bottles made of the 60-year-old whisky that was distilled in 1926 and bottled in 1986. Each of the four record-setting bottles was part of only 12 bottles—chosen from the original 40—that had been affixed with signed and numbered labels designed by Sir Peter Blake, the pop artist famed for designing the Sgt. Pepper’s Lonely Hearts Club Band album cover for the Beatles, along with Italian graphic artist Valerio Adami.

The bottles were originally offered as corporate gifts to Macallan’s most valued customers, but they’ve since become some of the most sought-after whiskies by collectors. Interestingly, according to Le Clos, each of the two bottles they sold on April 25 had originally been purchased for approximately 20,000 British pounds, with the last known bottle having been auctioned at Christie’s for $75,000 in 2007. But the $1,100,000 price for the bottle sold on May 18 now holds the world record for a single bottle price—for the moment, that is.