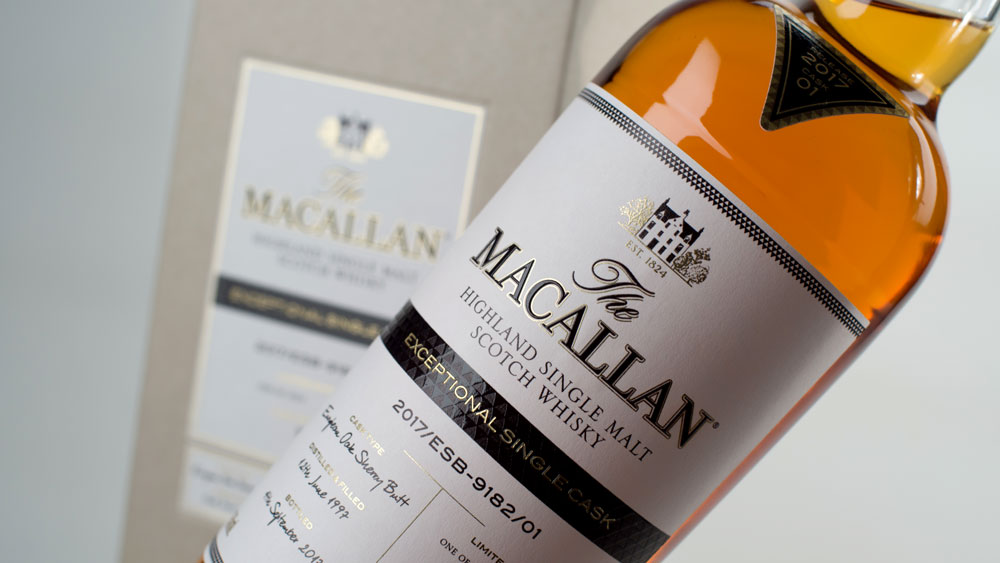 The Macallan is known—and beloved—for its consistent single malts that have been aged in barrels that formerly housed Spanish sherry. Those barrels impart The Macallan’s signature sweetness to the smooth whisky as well as notes of vanilla, fruit, and ginger. The brand is also known for its notable releases of limited-edition and extraordinary bottles. With its latest new collection, it stays true to the latter but upends the former, offering seven unique whiskies that don’t necessarily adhere to the typical Macallan taste profile.

Joining the ranks of its Fine and Rare Collection, Edition Series, and Sherry Oak selections (Sherry Oak 40 was just released in a very limited run), the Exceptional Single Cask range has been added to the portfolio. It’s unusual for The Macallan to stray from its established aroma and palate, but that’s the whole point with these new bottles—to showcase the diversity of the liquid that goes into the makeup of Macallan whisky with a grouping of cask-strength spirits that have surprisingly distinctive flavors. They’re all sold separately, but collectors will want to acquire the full set.

This whisky was matured in one European oak sherry butt (which can hold roughly 130 gallons) for 20 years, yielding 111 bottles. Of those, just 48 will be available in the U.S., making this the rarest of the selections stateside. Its 93.2 proof makes this the gentlest whisky of the range. Aromas of berry and oak mingle with wood spice and nutmeg on the palate. ($1,000)

This 13-year-old whisky has an unusually high proof for a Macallan, clocking in at 130.4. But even at this strength, notes of honey, almond, and ginger shine through, with heat pervading each sip. A little water will smooth this pour out a bit. ($275)

At 14 years old, Cask 3 also has a rather high proof at 121.6. Just 216 bottles are available here in the U.S. out of a total of 612 released globally. The whisky is balanced, with notes of toffee and oak up front and raisin and ginger on the back end. This, like casks 1 and 2, was aged in a European sherry butt. ($375)

The fourth cask in the series produced a 12-year-old whisky that has the second-highest proof in the collection: 127.6. While it’s recognizable as The Macallan, its flavors are amplified just past what a Macallan aficionado might expect. The nose is hot and fruity, with black pepper, orange, and spice on the palate. ($275)

The 15-year-old cask 5 whisky was also aged in a European oak sherry butt and yielded a spirit with a milder strength of 117 proof. This single malt has more of a classic Macallan flavor profile, with hints of vanilla, cherry, and raisin. The velvety mouthfeel gives way to a lasting finish. ($425)

This is the most mature whisky in the series at 22 years old. Casks 6 and 7 were matured in smaller European oak sherry hogsheads (which hold about 60 gallons) instead of butts. Notes of fruitcake, strawberry jam, and baking spices can be detected on the nose and palate. ($1,300)

This final whisky in the series is available in a run of just 132 bottles here in the U.S. Familiar notes of ginger, oak, orange, and chocolate permeate each sip. ($1,200)