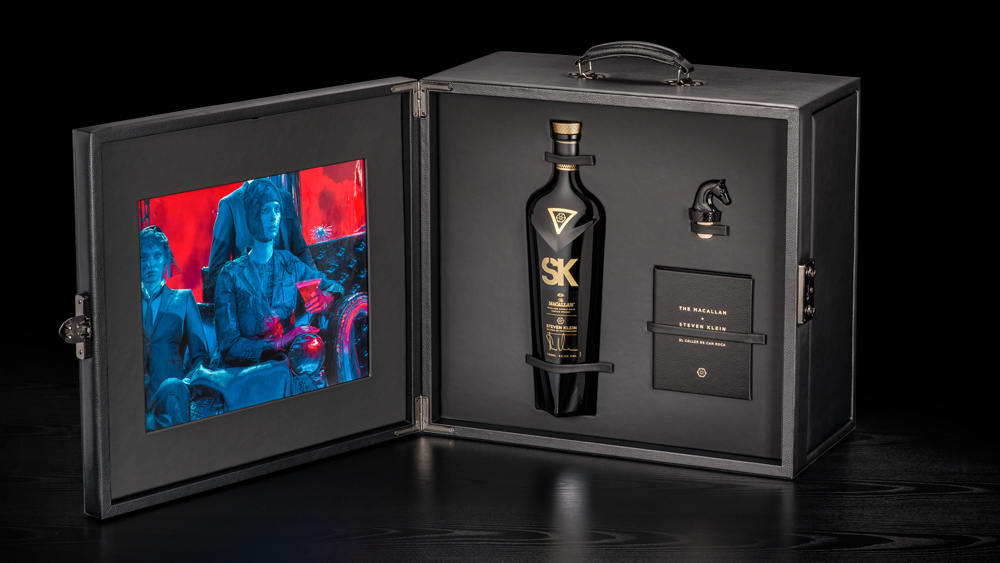 As an ongoing tribute to the similarities between the art of distillation and the art of photography, since 2008 Macallan has partnered with notable photographers such as Annie Leibovitz, Elliott Erwitt, and Mario Testino to marry whisky-making with the artists’ interpretations of the world of Macallan, one of the most award-winning single malts in the world.

Now, for the sixth edition in this series, Macallan has created the Steven Klein Masters of Photography bottling to salute the celebrity shock-jock photographer and filmmaker who inspires thought and introspection from those who view his images, which range from cadavers to A-list personalities such as Madonna, Lady Gaga, and Brad Pitt. Indeed, his videos and photographs often evoke a surreal moment in time.

Fittingly, the artist captures a moment from Macallan’s past—when its barley was dried over peated fire—in this Steven Klein edition, a 107-proof whisky that features an uncharacteristic smokiness inspired by the semi-industrial settings of many of Klein’s works. This edition is also Macallan’s first use of Rioja casks, resulting in sweet berries and spices and a unique pinkish-red hue reflective of the artist’s imagery.

The Steven Klein Masters of Photography release is presented in a black leather case containing a jet-black bottle of the limited-edition whisky, a Macallan Masters of Photography booklet, a Steven Klein–designed bottle stopper that pays tribute to his love of horses, and one of 10 exclusive signed prints that were created for this edition. A secret drawer pulls out to reveal a set of avant-garde barware created by the Roca brothers of El Celler de Can Roca in Spain.