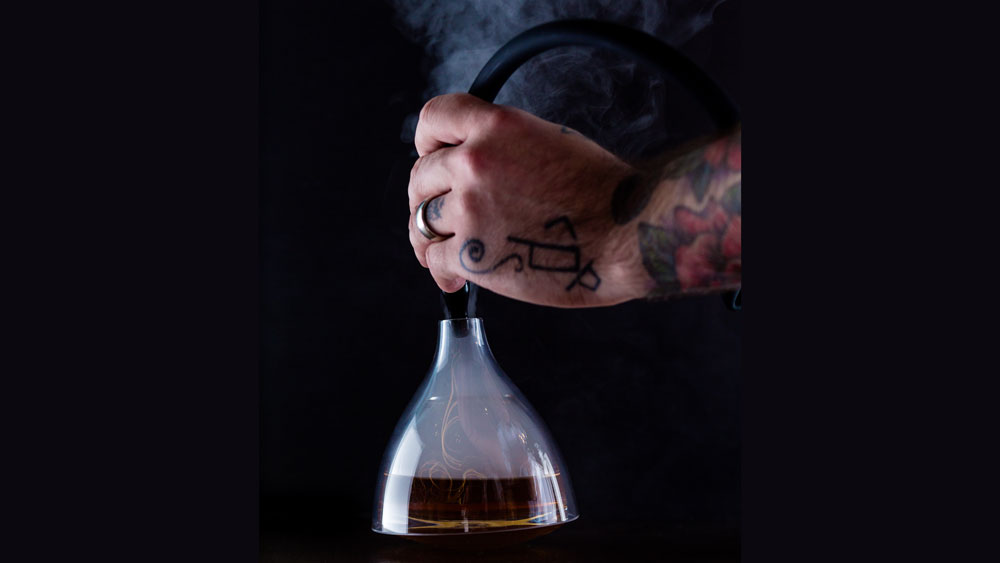 A server glides up to a table with what looks like a terrarium filled with fruit and vegetables. Another strolls in the opposite direction with a cocktail in a rocks glass, sealed in a clear plastic bag. Over here is a bi-level beaker, straight out of a science lab. Over there, an ice sphere with the liquid trapped inside. It can only mean one thing — The Aviary is open for business.

The Aviary has been wooing Chicagoans since 2011 with its surprising experimental cocktails and bites. The new Aviary NYC in midtown Manhattan is the first foray outside Chicago for co-owners Grant Achatz and Nick Kokonas, who also own and run the distinguished Second City restaurant Alinea.

The location — the 35th floor of the Mandarin Oriental New York at Columbus Circle, with stunning views of Central Park — is gorgeous enough that a merely passable bar would be worth a visit. But the Aviary NYC’s cocktails are so visually arresting that the scenery outside takes a back seat to the creations coming from the bar and kitchen.

The most eye-catching is the Science A.F. ($25)—a berry-infused cocktail made in a glass contraption using dry ice that sends plumes of smoke pouring out of the top and also chills the drink, which then drips down to the bottom level like a Jetsons-style coffeemaker. In The Rocks ($25), a variation on the Chicago branch’s classic, is a cassis and whiskey Old Fashioned. Only this cocktail is more new fashioned than old fashioned: It is chilled inside an ice sphere, which needs to be shattered in the glass with a rubber band slingshot.  Boom Goes the Dynamite ($22) is served warm, with dry ice added to release the aromatics, which also boosts the visual wow factor. Made with vanilla-infused tea, two kinds of rum, violet sugar, and vanilla liqueur, it’s an ideal autumnal cocktail. Without the molecular touches, these would all be delicious drinks, but the treat is in the presentation as much as the consumption.

The Aviary NYC is slowly ramping up its food menu, but the small bites currently available are no less dazzling than the libations. The Giant Crispy Pork Skin ($17) is an enormous sheet of reconstituted pork rind served upright, along with dipping sauces; it’s like a work of abstract art. The Black Truffle Explosion ($18) is more sedate visually, but the server advised eating the single raviolo “with your mouth closed… and probably your eyes closed as well,” such is the intensity of the truffle-infused liquid bursting from the pasta pillow upon biting it. The Pineapple ($18) is a delectable dessert, served atop a savory molé alongside frozen pebbles of passion fruit.

Plans are to have breakfast, brunch, and lunch menus available, but for now, the Aviary NYC is open from late afternoon until midnight. Walk-ins are welcome, but if the popularity of the original in Chicago is any indication, reservations are advisable.