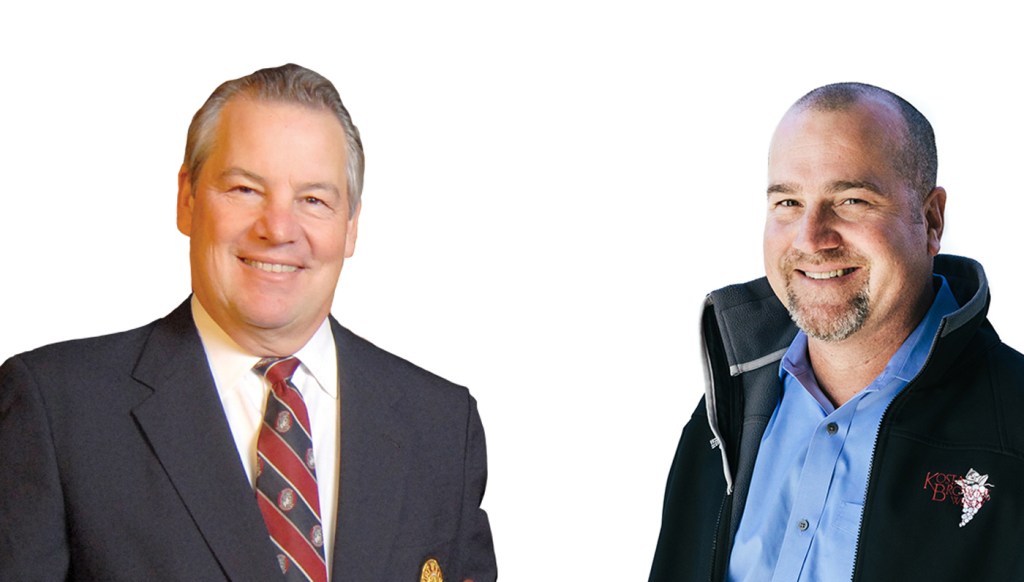 Neophytes to fine wine often find themselves intimidated by the pretension so commonly paired with the product and, like characters in the fable of the emperor’s new clothes, abandon their personal powers of observation to mimic popular opinion. This can be especially true when a palate is presented with the nuances found in Pinot Noir, an ethereal varietal that varies greatly in expression.

For guidance on the grape, one would be hard-pressed to find more seasoned sippers than master sommelier Fred Dame, former president of the Court of Master Sommeliers (and the first from the United States), and vaunted vintner Dan Kosta of Kosta Browne Winery. RobbReport.com recently spoke with both gentlemen at the annual World of Pinot Noir event, hosted by the Bacara Resort & Spa in Santa Barbara, Calif. The conversation covered what it means to be a master sommelier, the need to be cautious of wine critics, and why Pinot is so prized. Here are some highlights.

Robb Report: What was your path to the profession of master sommelier?

Fred Dame: Well, it wasn’t like I thought. This profession didn’t exist when I first started. I mean, we were sommeliers, but there were about six of us. A big debt is owed to Robert Mondavi for jet-launching wine in California to the next level and I fell in love with it. I found food and wine so fascinating, even back then, that I quit law school to pursue a career in the field. My mom never recovered from my decision, I think the words in her last breath were “law school.”

I started at the Sardine Factory [in Monterey, Calif.]. There were 3,200 wines on the list and 105,000 bottles in the cellar. That was pretty cool to be running a program like that when in your twenties. I then read about the program to become a master sommelier and petitioned the guild. They allowed me to sit and I passed [the] first exams, came home, entered a couple of competitions, and won them both. I eventually decided to found the American branch of the Court of Master Sommeliers in order to teach others and built it on one philosophy—pay it forward. I tell my students, “You owe me one thing, you owe me the next you.” Once they have their first student pass the exam, then they are a real master, until then, no.

RR: What has been the secret to your success?

FD: I am an instinctive taster. There are only a small number of us, most people are disciplined tasters, they have to be trained to discern and recall. For me, I smell it and remember it—which was great until I was in a fraternity, and then there was a lot I don’t want to remember but am stuck with. The rest is hard work, a lot of study, and I was fortunate in that, when I started, the world of wine was way smaller than it is today.

RR: What did you find to be the most challenging aspect of the Master Sommelier Examination?

FD: I had two tough things to learn. One was cigars, which is not part of the exam anymore. But my hardest part was learning how to address nobility. Fortunately, we don’t have a lot of nobles in California.

RR: With Pinot Noir’s ever-increasing popularity, how would you describe the evolution of the varietal in California?

FD: From your lips to God’s ear. But this is just the beginning, we haven’t scratched the surface, this is Burgundy when the Roman Empire was falling. We are at the naissance of Pinot Noir and have another 50 to 100 years to go. Just 20 years ago the product was awful, but the early pioneers of Pinot in California really bet the bank to make it work and finally hit gold.

RR: Pinot Noir is such a diverse grape as far as its expression. What are the advantages and disadvantages of that and why is growing it such an alluring challenge?

Dan Kosta: I think that the diversity of Pinot Noir is something that should be celebrated a bit more. Personally, I feel there is no other grape that is as transparent or tells as clear a story about where it is from. Unfortunately, with the varietal, some have the attitude that their style is the better style, but that is very dangerous thinking because we risk killing the goose that lays the golden egg—that egg is Pinot Noir’s diversity. My own cellar has Pinot Noir from everywhere. I just happen to live in Sonoma County where we do what we do best, make Pinot with Sonoma County fruit. It is only a matter of logistics that we don’t make versions of the varietal from Oregon, Burgundy, or New Zealand. If it was easy to do, we would do it because it’s such a wonderful exercise. To paraphrase one of my favorite quotes, which is from coach Vince Lombardi, achieving perfection is impossible, but in the pursuit of perfection you find excellence. Nothing says that more than making Pinot Noir.

RR: You have both mentioned Burgundy, do you see another region to rival it?

DK: I think you find quality in Pinot Noir when you stop trying to emulate another area. Pinot Noir started getting good in California when we stopped trying to be Burgundy. The only thing we have in common with Burgundy is the grape, everything else is different and we should celebrate what we have here. Having said that, I grew up drinking Burgundy. It’s what got me into Pinot Noir in the first place, and I have tremendous respect for the region, its history, and the French approach—it can’t be lost.

FD: I have a little different take. One thing we have that the French don’t is the freedom to do anything we want. They have severe constrictions from the AOP/AOC [appellation d’Origine protégée/appellation d’origine contrôlée] that range from the type of pruning to minimum and maximum alcohol levels. Here, we can experiment with different approaches every year, but imagine if we tried that in France? The neighbors would have a conniption. In addition, I think the quality of competition raises everybody’s game, whether it’s winemakers in New Zealand, Australia, or South Africa. If you’re careful enough, smart enough, and conscious of all the elements that go into a great Pinot Noir, you just might make one.

RR: Which up-and-coming wines should collectors keep an eye on as far as investment?

FD: The wild card here is that we should be moving beyond this. If you’re still sitting down consulting whatever demigod you read, and you’re buying wine based on ratings and scores, what does that say about you as an aficionado—forget “collector”—as an aficionado? With the broad palate that we have available today, the beauty is in the search, and the search should be a journey, an adventure. Not to knock the critics, they give a set of boundaries to consider and some good ideas, but it’s not scripture. Go out there and write your own gospel.

DK: I think one has to really discard absolutism because, in wine, there really is nothing new under the sun. Our wine culture in the United States is relatively young and therefore the pendulum for fads is very wide. There was a movement in the 1980s and ’90s that was referred to as ABC—“anything but Chardonnay”—and that is just a horribly close-minded concept, and quite naïve. But the pendulum always comes back to the middle, and the middle is reason.

RR: In the United States, it seems that California wines are not well represented on East Coast wine lists. Why is that?

DK: Proximity plays a part. And, let’s be honest, I think it stems from Manhattan. It’s the bellwether for the East Coast and, going back a few decades, French wine was the only game in town.

FD: There is a little misconception there. If you look at super-premium California wine, two markets make up 60 percent of its sales in the United States—California and Florida. But when it comes to New York, Dan is right. There are probably more French restaurants in New York than the rest of the country put together. The same holds true for French-trained sommeliers. There is nothing wrong with that, it’s just the culture they were brought up on. But times are changing and if you go anywhere else in the United States, you’ll find that high-end California Cabernet and Pinot Noir are boss.

RR: What is your desert island wine?

DK: Champagne. It goes with everything—breakfast, lunch, and dinner.