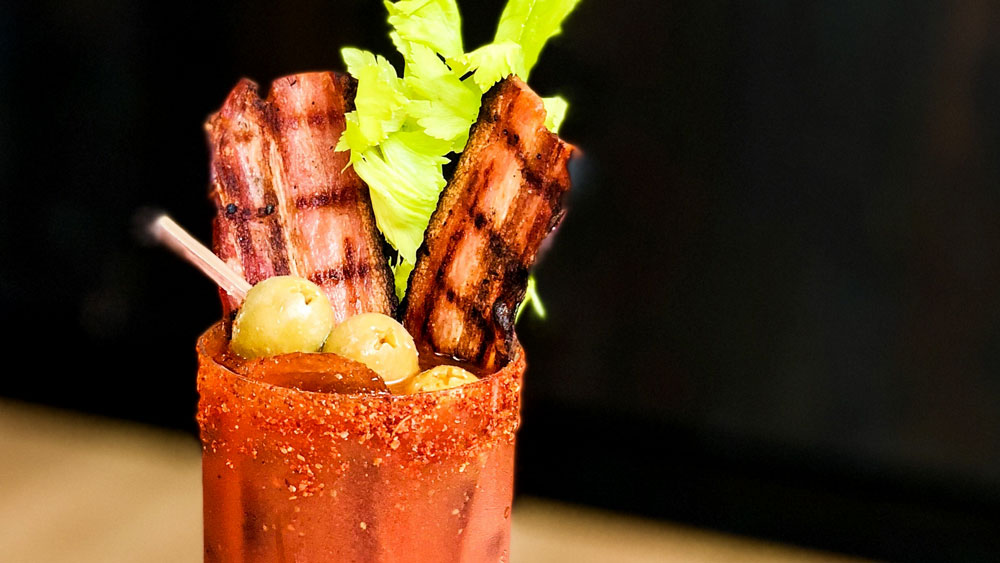 Las Vegas has always been a city of excess (just ask a higher roller about some of the city’s secrets). It’s not enough, for example, that some top Las Vegas restaurants have created rich cocktails designed to complement their thick, juicy steaks. Now a few of the more inventive mixologists are using the meat itself as an ingredient in their recipes. These innovative pours are coming from those intrepid bartenders who have dared to venture from the front of the house to the back, entering the kitchen to meld their talents with those of the chefs. And that’s how, in a nutshell, you get these—our favorite carnivorous cocktails. (Which nicely compliment, by the way, our favorite scent-inspired cocktails.)

The simplicity of the name of this hedonistic cocktail hardly does justice to its complexity. After all, it takes two days to make. But then, one would expect no less from Masaharu Morimoto, the original Iron Chef.

The drink begins with a bottle of Japanese whisky—and not just any Japanese whisky. In this case, Morimoto’s mixologists have selected the rather obscure Iwai whisky from Japan’s equally obscure Mars Shinshu distillery. With its upfront, bourbonesque notes of honey, caramel, and cherries, the blended spirit provides a perfect base for this ultra-rich drink. After the entire bottle is warmed, a quarter cup of rendered fat from premium A5 Japanese Wagyu beef is added; the concoction then sits for four to six hours. Afterward, it is put in the restaurant’s freezer overnight. In the morning, the fat-infused whisky is strained through cheesecloth, and two dashes of walnut bitters and a half-ounce of walnut liqueur are added. The cocktail is poured over a large square ice cube.

This is another beefy cocktail that has its complexity obscured by an easy-sounding name that doesn’t offer a clue to its multi-textured presentation. In this case, what we really have here is Yardbird’s proprietary pork-belly-infused old fashioned, in which smoked Duroc pork belly drippings are infused for two days in Wild Turkey 81 proof bourbon, which is then combined with Angostura bitters, orange bitters, and maple syrup before it’s shaken and poured over a two-inch ice sphere.

You won’t find this on the menu of the recently remodeled steak house; you’ll have to ask for it. If you’re lucky, Aria property mixologist Daniel Marohnic might even be around to explain it to you.

The cocktail was the combined inspiration of Marohnic and Jean Georges executive chef Sean Griffin, who is legendary for his California-oak-smoked Wagyu brisket. The rich, fatty rendering from this tender, ultra-slow-cooked beef is infused into a bottle of Suntory Toki blended whisky, which then goes through a sous vide process for four and a half hours. After that, it is frozen to separate the solids, filtered through cheesecloth, and rebottled.

The light floral flavors of the Toki whisky play against the smooth, spicy creaminess of the Wagyu renderings. It’s almost like drinking the brisket but without the smoky heaviness, keeping the extremely rich and buttery flavors. This cocktail is best served chilled and straight up in a cordial glass. “We were going to make this into an old fashioned with bitters,” says Marohnic, “but it came out so rich and unusual we decided to leave well enough alone. We keep it in the restaurant’s freezer.”

Maple Bacon Maria and Meat and Potatoes Cocktail  Photo: Courtesy of MB Steak/Top of the World

This newest steak house venture by brothers David and Michael Morton (of Morton’s Steakhouse fame) has inspired a tasty twist on the classic Bloody Maria. But in this case, MB Steak uses Mestizo reposado mezcal mixed with its house-made Bloody Mary mix, which is composed of fresh tomato juice, horseradish, Worcestershire, lime, lemon, orange, pepper, Tabasco, and celery salt. It’s smoky and spicy enough on its own, but the garnished strips of MB’s signature maple-glazed bacon along with a cornucopia of celery, smoked blue cheese, and Sriracha-stuffed olives take this over the rim. The glass itself is rimmed with a blend of smoked paprika, sautéed bacon, cayenne pepper, and spicy Tajín powder.

Bar: Top of the World

This cocktail is for the cooler months in Las Vegas (yes, there are some). Created by Jason Shullo, corporate director of beverages for the 60-plus restaurants and hotels owned by Golden Entertainment, the meaty drink starts out with 1½ ounces of Chopin Potato Vodka and an ounce of the restaurant’s beef stock, to which is added fresh lemon juice and a dash of Ancho Reyes Chile Liqueur. It’s all shaken together and strained into an ice-filled highball glass and topped off with a splash of Stella Artois Belgium lager. A chunk of seared filet mignon garnishes the drink. It’s just the thing to be sipping (and chewing) 800 feet above the Las Vegas Strip at Top of the World’s revolving restaurant.