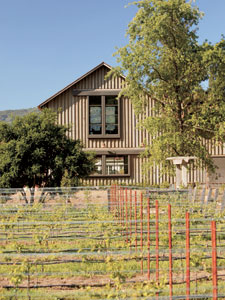 A banker. a real estate magnate. A shipyard owner. An actor and film director. A pilot.

This is indeed a patchwork cast of characters with which to form a plot—one that would perhaps have stretched the narrative talents even of a Balzac or a Dickens. But whatever device these masters of convolution might have contrived to bring this company together on an immaculately clipped lawn in northern California, it is unlikely to have been membership in the same club. Despite claims to the contrary, clubs—whether golf, yacht, or university—tend toward the homogeneous, attracting predominantly local members of the same social, intellectual, and professional genus. However, the collection that milled upon this manicured green one recent Saturday afternoon had arrived from different states and cities (and, in some cases, different countries), spoke with different accents, and possessed no observable common traits, save one: They were all sipping wine.

They performed this activity not with the clumsy abandon of the casual party goer, but with deliberation, focus, and more than a soupçon of enthusiasm. Exotic terms like “jammy nose,” “effulgent mid-palate,” and “black fruit,” as well as enticing adjectival phrases, such as “deep chocolate” and “vigorous cherry,” fluttered as lyrically as flocks of white moths among the shaded boughs of nearby apple trees. Groups of ladies in broad-brimmed hats strolled through meticulous rows of grapevines, the budding of which had prompted this occasion—one of the first official celebrations of the newly formed Napa Valley Reserve, a private members-only vineyard and winery in the heart of California’s most acclaimed wine region.

Whatever their other differences, the members there take their wine quite seriously. “The common thread of our members,” explains Bill Harlan, the club’s founder and the proprietor of Harlan Estate winery, “is that they have an interest in wine. Some of them have had that interest for a long time and are serious collectors. Others are relatively new to wine, but they really want to understand it from the vantage point of depth—the sensory evaluation of wines and pairing them with food.”

Another common element among the membership that courses through them like first-growth Bordeaux through a French gentleman’s veins is the unfulfilled desire to own and operate a vineyard. It is a romantic notion that seizes many of us, concedes Harlan, who—a seasoned and highly successful real estate developer—succumbed to the siren’s call decades ago when he formed Harlan Estate, whose releases are among America’s most sought-after Cabernet blends. “But even if someone had the patience,” he says, “it would be very difficult for them to find a property like this in the heart of the Napa Valley. And then there’s the commitment of time and the financial responsibility.

Harlan has, in fact, sunk more than $30 million into this unique concept, which he has carefully cultivated (both mentally and agriculturally) for nearly as long as his own celebrated property in Oakville. The club encompasses 50 acres of unsurpassed vineyards, at the edge of which is being constructed—against foothills blanketed in ink black pines and moss-draped oaks—a hospitality complex that includes a state-of-the-art winery, a vast cave that incorporates private wine lockers for all of the members, a spacious hospitality barn that overlooks the vineyards and contains an ultramodern gourmet kitchen in which guest chefs will hold food and wine classes, and a carefully tended kitchen garden that provides many of the raw materials for the meals that some members will offer their guests as complements to the wines they produce.

The wines are, naturally, the undisputed object of this endeavor. The vineyards, planted with the Bordeaux varietals (Cabernet Sauvignon and Merlot, primarily) for which Harlan is renowned, have not only historic significance (they were owned at one point by John Howell, after whom the Howell Mountain appellation is named), but also the more tangible advantage of being under the care of Mary Hall, the vineyard manager of Harlan Estate, which also lends to the club the skills of Harlan winemaker Bob Levy.

Both will oversee the production of the club’s wines, ensuring that these meet the highest standards, while at the same time encouraging the diverse yet impassioned members to assist in the process of winemaking at every step. “When we first discussed this project,” recalls Hall, “some of us were skeptical about how many people would want to actually get involved hands-on. We thought: Well, a few people will wander out into the vineyards to see what’s going on, then they’ll retreat to the clubhouse to sip cappuccinos. But the first day that we pruned, they were out with a vengeance,” she laughs. “We had to call them back. I realized I would have to set aside a student vineyard where the damage could be contained.”

Membership in the Napa Valley Reserve includes access to (and special rates at) the nearby Meadowood Resort. Membership must be approved by the management. The initial membership fee is $100,000. An additional $1,000 in annual dues is required, as is the purchase of an agreed-upon number of cases of wine, priced at an expected $45 per bottle.