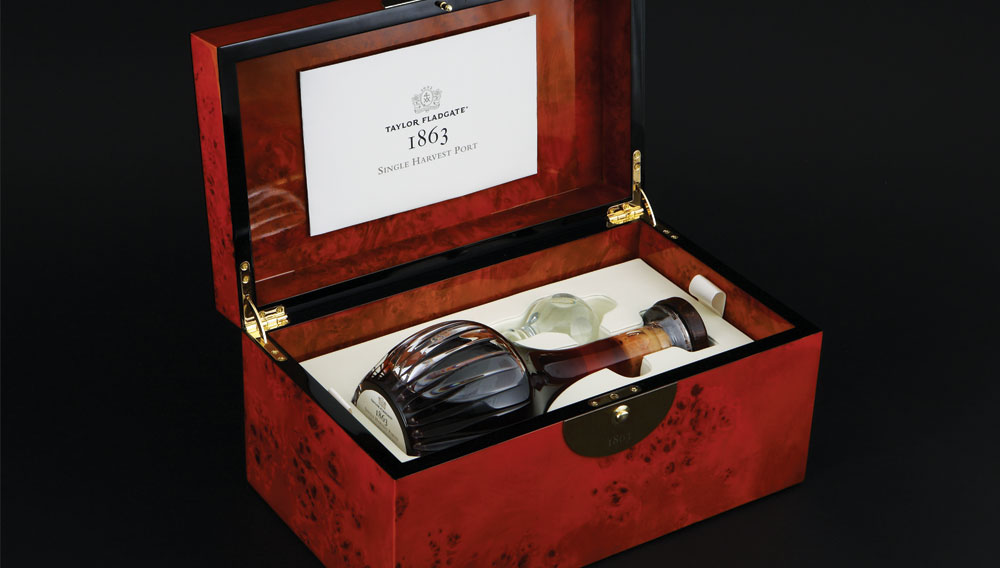 Taylor Fladgate uncorks a vanished century with its latest release of tawny port.

Typically, tawny ports reflect the average age of their blended wines, with 10, 20, 30, and 40 years being the standard figures. However, some tawnies possess such exceptional structure that they are held back and used sparingly to lend added depth to older blends; while still others prove so spectacular that the winemakers designate them as single-harvest ports, known as Colheitas, which are blended from wines of the same vintage. The world’s oldest tawny, Scion, dates from 1855 and was released four years ago by Taylor Fladgate. Thanks to its extensive reserves of cask-aged fortified wines, this distinguished house, founded in 1692, has recently released a slightly younger tawny, the 1863 Single Harvest Tawny. It is the second-oldest port in the firm’s Vila Nova de Gaia lodges, where its casks were sequestered within a locked cage.

This venerable single-harvest tawny is historically significant for reasons beyond its great age. Not only does the wine come from one of the finest vintages of the 19th century, but it also represents the last spectacular harvest in Portugal’s Douro Valley before the catastrophic spread of phylloxera. Offered in a limited edition of just 1,600 crystal decanters, 280 of which are allocated to the United States, the Taylor Fladgate 1863 Single Harvest Tawny, priced at $3,700, is housed in a presentation case of maple-burl veneer and accompanied by a certificate of authenticity bearing the signature of Adrian Bridge, managing director and CEO of the Fladgate Partnership.

A pour of this ancient port reveals not only its toasted-salmon hue ringed in amber gold but also its surprising depth and elegance. The flavor is full and rich, exhibiting prominent notes of black olives, stewed plums, and cedar, along with a finish that lingers and a fragrance that remains in the glass long after it has been emptied.

“There are two emotions on trying this port wine,” says Bridge. “The first is the sheer complexity, density, and structure that it combines with a wonderful range of flavors. This has an incredible length, and I can still taste it 20 minutes later. I spilled some on my hand and could smell the aromas many hours afterward. The second is the history: This port is truly a messenger from a previous era. It almost needs to be revered, but in reality, it is better to drink it.”