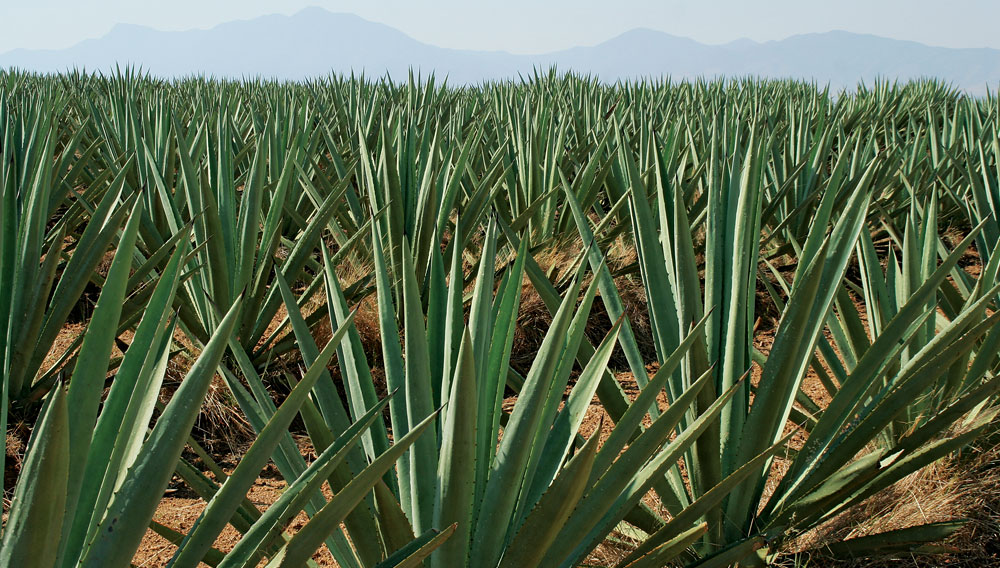 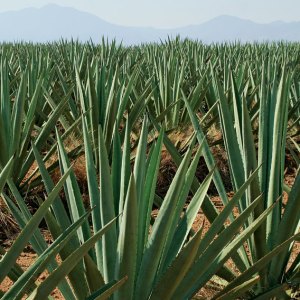 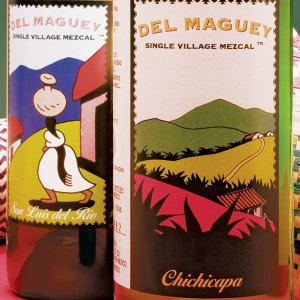 His Zapotec face as weathered as the creased cowboy hat that sits on his head, Faustino Garcia Vasquez silences the room with just a look. We stand in a structure made of adobe brick and corrugated metal that provides a cool shelter from the sun that beats down on the village of Chichicapa. Our group—composed of me, some barkeeps, and the owner of Jimmy’s restaurant in Aspen, Colo., which has one of the United States’ top agave spirits bars—has traveled here to the outlands of Oaxaca, one of Mexico’s southernmost states, to delve into the mysteries of mezcal, the spirit distilled for centuries by the Zapotec, Mixe, and Mixtec peoples. Long regarded by some as mere fiesta firewater, mezcal can be as complex and layered as the very best Cognac; indeed, rare single-village bottlings can command prices of $300 or more in fine spirits shops in the United States.

Our indoctrination begins with a Zapotec ceremonial rite. Vasquez pours the clear spirit from an earthen cup onto the cracked dirt floor to form a cross. He then offers a toast in a language many thought died out with the Spanish Conquest nearly 500 years ago. As the words resonate within the room, centuries and cultures intersect.

For Vasquez, a palenquero, or mezcal, producer, the ceremony pays tribute to Mother Earth, as well as to his ancestors. It is an expression of gratitude that predates Christian symbolism, harking back to a time when fierce, gilded gods with names like Quetzalcoatl and Mayahuel held sway over this rugged land. To the rest of us, however, the mark on the floor represents the fulfillment of our quest.

Our guide is Ron Cooper, a ponytailed artist whose work is part of the permanent collections at the Guggenheim and the Los Angeles County Museum of Art. He first discovered Oaxaca and mezcal on a trek through this remote part of Mexico four decades ago with some surfer friends from California. That experience furnished the inspiration for his latest artistic endeavor: the vaunted Del Maguey brand of super-premium single-village mezcals. “A work of art is successful to me if it transforms the person experiencing it,” says Cooper. “This mezcal meets my criteria for art.”

Clearly others agree. Since Cooper’s boutique brand made its debut in 1995, it has established a new benchmark for quality in the mezcal category, winning multiple international spirits awards. Del Maguey has been showcased at high-profile events, such as the Food & Wine Classic in Aspen, and has earned the praise of such tastemakers as José Andrés and Mario Batali. Today the label can be found on the bar shelves of cocktail capitals such as New York City, San Francisco, and Los Angeles.

prior to arriving in Chichicapa, our group traveled southeast on Highway 190, the historic El Camino Real, to visit isolated villages whose inhabitants produce unsurpassed mezcal using traditional techniques. With Cooper behind the wheel, we drove past small settlements, wound through tawny foothills and river valleys brimming with corn and maguey, and ascended corkscrew mountain passes guarded by organ-pipe cacti that towered two stories above hardscrabble earth.

Along the way, we learned a considerable amount about mezcal’s cultural underpinnings. It was once believed that mezcal, the mother of all Mexican distilled spirits, was invented shortly after Spain’s conquest of Mexico, when the natives began to use copper European stills to extract the essences of their highly revered agave plants, known as maguey (ma-gay). However, recent discoveries have proved that the indigenous peoples produced mezcal in their own archaic sills well before the Spanish invasion.

Traditional mezcal production typically utilizes between 12 and 30 of the more than 200 types of maguey plants that grow in Mexico, the most important of which are the espadin and the coveted wild tobalá. Sometime in the mid-19th century, however, methods for producing vino de mezcal, as the spirit was called, changed in the Jalisco region: Aboveground ovens replaced earthen-pit hornos, and a monoculture developed around Agave tequilana, or blue agave. Despite the close kinship that exists between mezcal and Jalisco’s spirit, which came to be called tequila, regional and technical differences continue to separate the two traditions.

As he piloted our vehicle, Cooper told us about his quest to preserve traditional mezcal production. He expressed his concern that smaller artisans, most of whom produce about 1,000 liters per year, could become casualties of powerful mega-producers such as the Casa Armando Guillermo Prieto enterprise, which is currently preparing to launch mezcal into the mainstream with newly opened factories capable of producing 10,000 bottles per day. To achieve this, these larger companies must skirt Mexican government regulations, some of which Cooper—no stranger to the politics of the spirits industry—helped to frame. In fact, he was a key figure in the creation of the Mexican Regulatory Council for the Quality of Mezcal five years ago. Larger operations, he told us, might undermine the standards that he and others had labored to establish. “They’re turning maguey into coleslaw with giant grinders,” he said, “adding chemicals and accelerators and ignoring important production requirements.”

As we approached San Luis del Rio, where one of Cooper’s producers distills the Del Maguey mezcal that bears the town’s name, I got a true sense of the area’s terroir. Road cuts in the steep hillsides revealed a distinct chalky soil reminiscent of what one might see in the Champagne region of France. “This is tierra blanca, white earth,” Cooper informed me. “Good for maguey. It’s caliche—high in calcium carbonate.”

Cooper pointed out other soils in the region, including tierra amarillo, which consists of decomposed granite and is favored by the elusive tobalá; the iron-rich tierra rojo; and tierra negro, a black soil containing humus and organic matter that is detrimental to the stress-loving maguey.

After traversing countless dusty miles, we reached Chichicapa, where we witnessed firsthand the small-batch techniques that are deeply rooted in the tradition Cooper calls “the hand of the maker.” In this process, no dials, hydrometers, or stainless-steel vats are used. Instead, newly harvested piñas—the hearts of the maguey plants—rested in the shade of the tin-roofed palenque and began to slowly ferment. Outside, a deep horno lined with volcanic rocks was loaded with piñas weighing up to 200 pounds each. These plants were covered with earth and allowed to cook slowly for several days to acquire the flavors that impart to the mezcal its signature notes of earth and smoke. A horse slowly pulled a large stone wheel, or molino, in circles on a cement pad, grinding already-cooked maguey hearts into a sweet, pulpy mass that attracted legions of honeybees.

after our tour and Vasquez’s toast, we take our first sip of the mezcal from Chichicapa. The spirit is savory and sublime, its citrus aromatics segueing on the palate into flavors of fall fruits and bitter chocolate. Cooper draws our attention to a limited-edition, 14-year-rested bottle of Chichicapa that he is selling in the United States, but the spell of the young, or joven, mezcal captivates us.

Our journey ends with a visit to the home of Don Laureano, a wizened patriarch who produces Del Maguey’s Minero and Pechuga, the latter of which is a labor-intensive, triple-distilled bottling that retails for $200 in the United States and incorporates the flavors of chicken breasts and seasonal fruits and nuts. We join him and his family for a languid lunch under a guava tree.

A brief afternoon rain shower sends us to the shelter of the palenque. The smells of wet earth, charred wood, and fermenting piñas combine with the scent of mole from the table. This heady perfume captures the essence of mezcal, which, wherever it is imbibed, remains a part of the place it was made and the people who made it. As we prepare to leave, Don Laureano reminds us of this truth. “You can take a bottle home,” he says, “but it’s not the same as drinking here with us.”

TASTING NOTES FOR A SELECTION OF  OAXACA’S FINEST MEZCALS

Chichicapa: An aromatic nose of earth and lemon rind; a full palate of flavors dominated by citrus, Mexican chocolate, and peppermint; a pronounced smoky finish.

Crema de Mezcal: Nose of vanilla and pear with creamy, dessert-trolley tastes that include almond, café au lait, and pineapple.

San Luis del Rio: Bright spice and citrus on the nose; engages the upper palate with subtle roasted fruits, then a smoke-and-wood finish.

Minero: A piquant-floral nose followed by fig and vanilla; a finish of balanced, earthy minerality.

Pechuga: Triple-distilled mezcal produced with seasonal fruits, nuts, and chicken breasts; highly complex aromas of lime, apple, and brine; a smoky palate and finish that are reminiscent of an Islay single malt.

Tobalá: Distilled from rare, wild-harvested maguey; a nose of tropical fruit and subtle floral scents; cinnamon and mango on the palate before an exceptionally long finish.

Los Danzantes Reposado: Nose of toasted maguey and caramel; a woody complexity and herbaceous zest on the palate; a finish of charred mesquite.

Sombra: Wood smoke and citrus on the nose; a generous palate rich in minerality; a smoky finish with hints of tropical fruit.