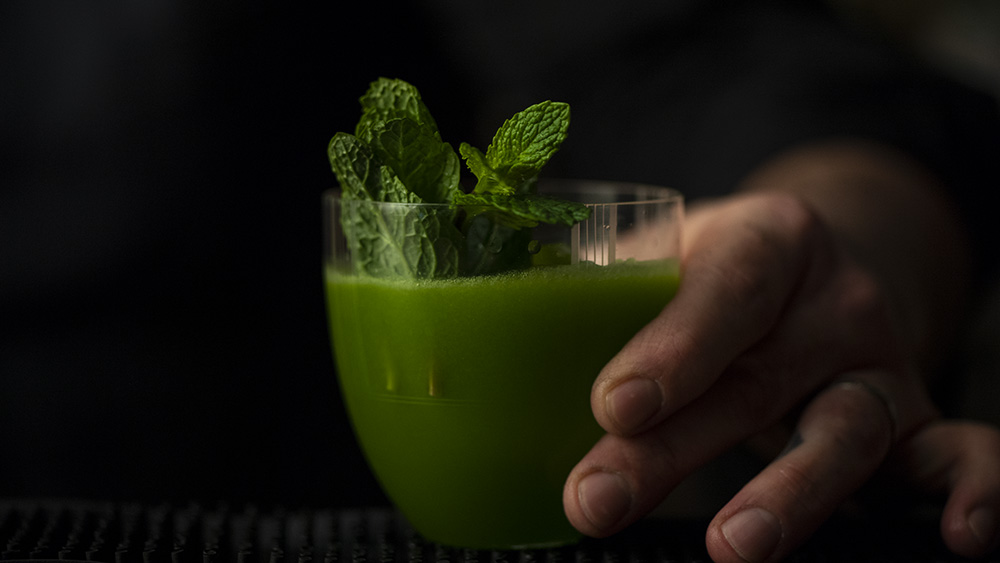 Order a dirty martini at Addison, the Forbes five-star (Michelin one-star) restaurant in San Diego, and it’ll be garnished the way it would be garnished at a standard bar, with three blue-cheese-stuffed olives on a pick.

The Addison bar, however, is not a standard bar, and these are not standard olives.

Bar manager Ian Ward prepares these olives by heating thinly sliced cuts of pork belly. To the rendered fat he adds Sauternes, deglazing the pot and cooking off the alcohol, and then stirs in heavy cream, black pepper, and fromage d’auvergne (a gorgeous bleu cheese from central France). The pork belly itself is then diced fine brunoise alongside fresh chives, folded back in, and the mixture is poured into a piping bag, to be added to pitted Castelvetrano olives when ordered.

This is not on the menu, and they don’t advertise it. They just do it. “The entire bar program should be an expression of the occasion the guest is there to experience,” Ward says. “It’s an act of thoughtfulness.”

But Addison seems to be among the rare exceptions in the world of fine dining. In the best restaurants in the world, chef will go to just about any lengths to procure an exceptional ingredient and to prepare it in a way that does it justice, regardless of laboriousness. Almost all of these restaurants have capacious, impressive cellars housing multi-million-dollar wine inventories, listed in books so thick you groan under their weight….But what of the bar? What is the role of the cocktail list in a place like this?

The answer, for most of them, has been “not much.” Of the fourteen three-star Michelin restaurants in the US, seven don’t offer cocktails at all. One of those, the French Laundry, has kept an old and rare spirits selection since 2013, but there’s no bartender. Instead, they suggest a pour on the rocks after your meal, in the courtyard, with a cigar (it’s hard to be disappointed in this). Michelin itself, famously tight-lipped about its standards, offers only that its inspection framework “is all about the food on the plate, as it has been for nearly 120 years.” While it’s added a symbol in its guide denoting a “Notable Cocktail List,” the cocktails have nothing to do with the stars.

What of the judges of other entities and guides? Forty American restaurants earned five stars from the Forbes Travel Guide this year. Of the major arbiters, Forbes is probably the most meticulous about its service standards; there are more than 900 boxes to tick, all codified and precise — “beverages not empty for more than 30 seconds,” “beverages served within five minutes,” etc. The problem, then, is that you can’t codify an artistic evaluation. They specify that cocktails must have a “distinctive presentation” with a “well-balanced flavor,” which could mean anything from “world class” to “tastes ok.”

The World’s 50 Best Restaurants List, for its part, does not exclude the bar from its objective judging criteria, because there is no objective judging criteria. The 1,000+ judges simply pick, in their minds, the best restaurants, whatever that might mean to them. “It’s the overall impression,” says William Drew, director of content for 50 Best, “It’s an entirely free vote.” There are rules against voting for yourself and other such things, but when it comes to evaluations, it’s completely subjective.

“It’s pretty rare that a restaurant [on the list] is attached to a bar,” Drew says, “but it’s not out of the question.” He cites Central, in Peru, and Leo, in Bogata, as restaurants on the list that have exceptional non-wine offerings, noting that this is more likely to happen in cultures that haven’t, historically, been so wine-centric. He also cites Eleven Madison Park in New York City as a bar program that has long led the way.

Put frankly, there are almost no fine dining restaurants that deploy the full battery of their gifts and abilities on the bar, which makes the ones that do that much more special.

“No matter what kind of bar you’re creating,” says Leo Robitschek, under whose guidance the Eleven Madison Park bar has become an example of what fine-dining cocktails can be, “it’s all about intention. We wanted it to have some kind of synergy between the ethos of the food and cocktails—all set through the lens of the ingredients.”

When they took over the space at Eleven Madison Park in 2006, it was a bistro with a busy bar. “Daniel [Humm] and Will [Giadara] approached me saying, ‘We want to make this one of the best bars in the world,’” he remembers. “Daniel saw the need to have great cocktails, just like great food, wine, coffee and tea.” At first, they made it simply a great craft cocktail bar, but over time it evolved to become “synonymous with the food,” he says: ingredient focused, with a local point of view, and like the restaurant itself, surprising and unique.

“We use culinary techniques, simple in presentation, with all the complexity behind the scenes. We can spend more time extracting flavor and nuance because there’s less volume, more prep, and more staff.”

There’s a cocktail on the menu, for example, called “Barley.” The recipe requires, among other things, a teaspoon and a half of red barley koji water. To make this, components need to be weighed to the gram, blended, vacuum sealed, fermented in-house over six days, frozen, and then defrosted slowly over a colander. All this for just one of the seven ingredients in a single cocktail, and there are 11 cocktails on the menu.

In the Bay Area, Michael Kudra, of Quince, and Jason Strich, of Manresa, are doing similarly intentional, elevated cocktails. Both restaurants have three Michelin stars, and both are temples to the majesty of California’s produce, so their bars echo that. “I take a piece of produce in peak season—corn, or sungold tomatoes—and I engineer a cocktail around it,” says Strich. He readily acknowledges that the food and the wine are the stars of Manresa, but sees an opportunity for the bar to be a good welcome to the restaurant’s ethos.

Because the cocktails generally come first, he keeps them relatively low in alcohol. And because the food is the star, he takes care not use flavors that are too loud or resonant. And because it’s fine dining, he takes extraordinary pains to make it distinct and memorable. “Everything from the glassware to the garnish,” Strich says, “you take a sip of it and hopefully think ‘wow, that’s perfect.’”

Back at Addison in San Diego, Ward’s cocktail program is more conceptual and influenced by the kitchen’s hyper-seasonal approach to the food. “Each season we craft drinks inspired by one central ingredient,” he says. “In the summer that may be stone fruit or melons; in the fall that may be apples or persimmon. The intent is to source the best possible ingredients and then create a series of cocktails that celebrate their distinct flavor profiles.”

He’ll pickle a year’s worth of ramps in the spring to use in Gibsons for the other 11 months and is fermenting persimmon vinegar to be used a few years from now. “Cocktails on our list may read similarly to those at a traditional bar,” he says, “but the difference is in the details.”

Eleven Madison Park is technically not on the list of the 50 Best Restaurants, because it’s been retired from competition after taking the top spot in 2017. “If you want to be the best restaurant in the world,” says Robitschek, “you need to put as much focus on the bar as on everything else.”

The bar at Eleven Madison Park.  Photo by Jake Chessum

Michelin three-starred restaurants in the US that have…

The Restaurant at Meadowood