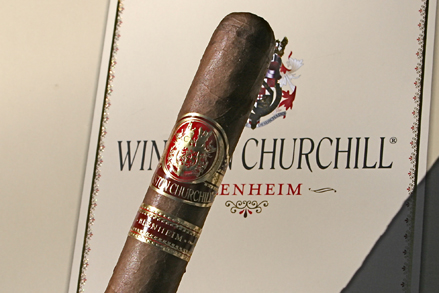 Sir Winston Churchill was often thought of as a bulldog and a lion?anything but mild. Yet the Winston Churchill cigar is among the tamest on today’s market. And like Sir Winston, it is also elegant and dependable. Inspired by Winston Churchill’s grandson and namesake, working in conjunction with the Davidoff factory in the Dominican Republic, this cigar is delicate, even by Dominican standards. Appropriately, given Sir Winston’s fondness for Cuban cigars (an enthusiasm that led to one of the largest sizes being named after him), the tobaccos in Winston Churchill cigars are from Cuban seed, albeit grown in the Dominican Republic, Nicaragua, Ecuador, and Peru. The four shapes are named after Churchill landmarks: Blenheim 7×48 (the place of his birth), Chequers 5½x46 (the British prime minister’s country home), 10 Downing Street 5¼x52 (the British prime minister’s London residence), and Marrakech 6×50 (the inspiration for many of Churchill’s paintings). All are perfect daytime smokes, worthy of the man who once said, “I am easily satisfied with the very best.” (www.Davidoff.com)