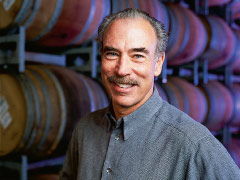 While Robert Mondavi has been the face and voice of the family company, sons Michael and Tim have been quietly running much of the operation for nearly a decade now. In their roles as chairman and vice chairman, respectively, they have expanded the company to encompass winemaking operations in the Languedoc region of France (Vichon Mediterranean), Tuscany (Luce, in cooperation with the Frescobaldi family), and Chile (Seña, with the Eduardo Chadwick family), exporting Californian expertise to new countries. Michael and Tim discuss their vision for Robert Mondavi and the challenges of preserving the tradition while adapting to the needs of a changing industry.

RR: Did you feel like you had to go to work for the family business, or was there a point where you thought you would do something else?

MM: It’s kind of like growing up in Dad’s shoe factory, if you’re in the shoe business. From the time I was 6 months old the family had the Charles Krug winery in the Napa Valley. My playpen and jungle gym, essentially, were the tanks and the barrels and the winemaking equipment. My mother and father constantly told us, “We want you to do whatever makes you happy. And, by the way, if you want to get in the wine business, great, but think about all these others first.” They outsmarted us, because anytime a parent tells a kid, “Don’t do this, think about all this,” what are you going to do? The opposite. (Click image to enlarge)

RR: You have a real connection to the land and the place. Is it the land, the place, the vineyard itself that is the building block of a brand?

MM: The French will say the soil is 90 percent; the rest is a combination of that vintage year and a little bit of the human element. In California, we’ll say the soil has great importance, but it’s what you do with it—the way you plant it, the way you manage it. The soil has to be good in order for you to have the opportunity of creating a great brand. If you do everything else right, but don’t have the right soil, you won’t make it. But the reverse is true: You can have the best soil in the world, but if you don’t do a good job of growing the grapes and nurturing those vines, producing the wines, and either marketing or selling it properly for a profit, you’ll be out of business.

RR: As chairman, what is the challenge in running a business with a large aesthetic component?

MM: To be in this business, it’s a prerequisite to have a big ego, and we do. The good news is that we recognize it and try to keep it under control. You must have faith in your own taste. I was the winemaker in the first few years, with my father as a mentor and teacher; then in ’74 my brother [Tim] took over as the winemaker and still is to this day. There’ll be all types of critics that criticize style, and instead of talking about the style they’ll talk about the quality. You have to have broad enough shoulders to say, “I truly believe that this is one of the great cabernets or chardonnays of the world,” and do everything you can to produce it.

RR: What is your proudest achievement so far?

MM: The proudest moment for my family and our team is when I go into a store locally, or go to the gas station and give someone my credit card, and they say, “You’re from Robert Mondavi?” and I say, “Yes.” And they say, “I hear it’s a great place to work, who can I contact about getting a job?” We try to attract people who are just passionate about growing in their own careers and their own lives.

RR: How do you and Michael complement one another?

TM: People would say of Mike and I that perhaps we were raised with the idea of being two halves of a whole, and I think we’ve grown beyond that. Early on, Mike got involved in the vineyards and the wines, and then as I came in, I got involved in the vineyards, and he shifted over into sales, then took on the role of the presidency and is now acting as our chairman. Mike’s focus is more the marketplace, and his demeanor is more the marketplace. Mike is very quick to respond to issues as they come up. I love dealing with the mechanics and dynamics of wines and being able to develop systems that perhaps take longer to get into play, but that I think are critically important for a long-term business. (Click image to enlarge)

RR: What are some of the contributions or innovations you have introduced?

TM: I’ve urged that we get closer to the soil, get closer to the vines, in a more natural way. [The industry] had lost the tradition of winegrowing and the connection to the soil for effectively a generation. Technology came in, and it really focused on things in the cellar. I’d like to think that by embracing a more natural approach, both in the cellar and in the vineyards, by understanding the essence of the different sites, we have contributed to the understanding of appellations in the Napa Valley. We helped to define the framework of appellations within Napa Valley as they’re evolving today. Our association with Mouton Rothschild helped that. So I would say from a wine perspective, I allowed our technology to grow, and as a result of encouraging even more commitment to technology, we were able to use it in a way that is no longer repressive but rather enhances the natural process.

RR: What would you say is the quality and character of Mondavi’s wines?

TM: Given that our goal has been to produce wines among the finest in the world, we’ve always taken it upon ourselves to understand what the finest of the world are doing, to fashion our wines from a position of awareness. Napa Valley has unique qualities and distinctions. We have a profound respect for terroir. Another fundamental issue is that the purpose of wine is not only to be an abstract work of art: It is meant to enhance a meal. I think ultimately our wines must have depth and layers of flavor and richness and generosity, but they also have to have an elegance and finesse. So clumsy tannins, harsh, unstructured tannins, overwrought wines, overly alcoholic wines— those just don’t jibe. Part of our strength is that we do have associations with people who have been around for a long time in wine—our first association with Opus One, and Mouton Rothschild and First Baron Philippe allowed us a look behind the green door, as it were. Our test of a wine is how it unfolds during the course of a meal. That’s our tradition. That’s our history.