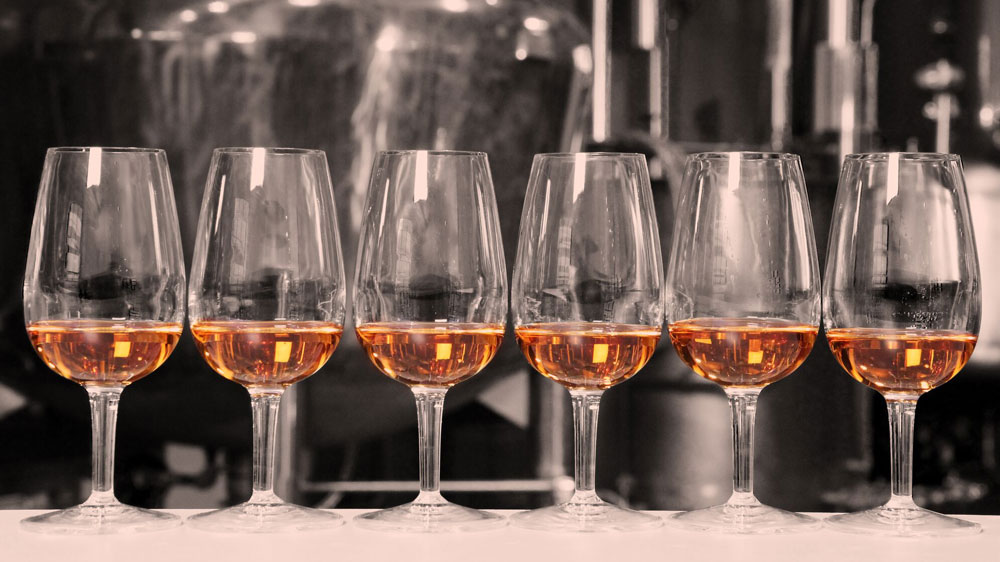 Buying a hand-picked barrel of whiskey and then years later reaping the benefits—around 250 custom labeled bottles—was once a rarity. Today, dozens of distilleries large and small offer a personalized barrel program. Still, at the end of the day, it’s really just a single cask of Jack Daniel’s or Maker’s Mark poured into “your” bottle. The better way to put your personal stamp on the spirits you love is to make them yourself. From scratch.

That’s the brilliant idea behind My Craft Distillery, a twist on the cooking-school-vacation model for adult beverage connoisseurs. The inclusive, multiday experience is offered at Moonshine University in Louisville, Ky., the beating heart of bourbon country. Moonshine University has been around for years, and despite the fanciful name, it’s a real thing, with its own stills, lab, and classrooms. But until recently, its sole focus has been professional education. Just as aspiring chefs head to culinary school, would-be distillers come here to learn the art and science.

With hundreds of entrepreneurs opening craft distilleries in virtually every state across the U.S. in recent years, the faculty has been quite busy. Moonshine U also offers short-term immersion classes for bartenders, servers, and hospitality industry personnel, and the one-day Bourbon Steward certification class, held monthly, almost always sells out. But a funny thing happened in the last couple of years: Whiskey-loving members of the public started signing up for the Bourbon Steward class in droves, and once they outnumbered industry enrollees, management realized there was a thirst for more immersion into the world of spirits—especially whiskey—and My Craft Distillery was born.

In the classroom  Photo: Courtesy of Moonshine University

The concept and structure of the nearly week-long program is based around producing whiskey—including bourbon and rye—but the curriculum is also offered for gin, rum, brandy, and even absinthe. Some can be made in as little as three days. Whichever spirit you choose, all the courses are private and just for your group—typically up to four people—and include lots of background education about the history, laws, and stylistic differences within your spirit of choice.

Bourbon is the most popular (and the longest) course, beginning with a focus on the primary taste influence: the mash bill—essentially the recipe in the form of your chosen mix of grains. While all bourbon or Tennessee whiskey must be at least 51 percent corn, it is the remainder—composed of more corn, rye, barley, and/or wheat—that differentiates the many brands. The most traditional mix, found in best sellers such as Knob Creek, Jim Beam, and Wild Turkey, is high in corn at around 70 percent, plus roughly equal parts of rye and malted barley. The most common variants are high-rye blends, which are typically spicier or fruitier (think Bulleit, Basil Hayden’s, Booker’s, Old Grand-Dad, etc.), while the least common are wheated bourbons, with the added wheat making them softer and grassier (Pappy Van Winkle, Maker’s Mark, etc.). For this reason, all visiting whiskey makers go through a pre-interview process to assess and narrow their preferences and make sure the proper ingredients are on hand. “Our last group kept tasting different samples and upping the percentage of rye in their mash bill until it was so high we started to worry we wouldn’t have enough,” says Colin Blake, director of spirits education at Moonshine University. They did not run out, however, and the custom high-rye bourbon is now ageing gracefully in the racks at MU.

The whiskey version of My Craft Distillery begins after your arrival on a Sunday afternoon with a sensory evaluation and samplings of various commercially available brands to fine-tune your favorite style and flavor. You will then use this information to dial in the percentages and create your own custom mash bill, with plenty of consultation and assistance. Afterward, two staffers will take your group out for a welcome dinner. Whiskey making begins in earnest the next morning, when you return and mash two batches in the micro-distillery’s cooker. After this, the next step is fermentation, which takes two days, so Tuesday is when extra-curricular activities begin. This is a full day away from campus, typically spent on private tours of top Kentucky distilleries and horse farms via chauffeured car—though during race-meet seasons, you might opt for time at Churchill Downs, home of the Kentucky Derby. Foodies can mix distillery or farm tours with a curated tasting of Southern country hams, and golfers can hit the links for a round during their free time.

“Bourbon is the number one reason people come to Louisville,” says Blake. “But after that it is horses and food, and our program lets you put them all together as you see fit.” Wednesday begins with a unique highlight of the program—a field trip to the nearby Kelvin Cooperage to build, toast, and char your very own barrel, with [much-needed] expert help from the staff. By law, bourbon must be aged in new oak barrels, but the levels of toast and char are the other big element besides mash bill that determine and distinguish the final taste.

The final two days, Thursday and Friday, are for distilling and include more sensory training to choose between the heart of the distillation runs—the good stuff you keep—and the heads and tails, which are high in impurities and are tossed. You distill twice, once each day, choosing when to make your heads and tails cuts, and finally you barrel your whiskey. After an initial ageing period of around two years, you will be sent samples every six months until you decide it is ready, at which point it will be bottled and custom labeled. Then, you will collect around 250 bottles of your own creation. If you are planning to use your whiskey (or rum or brandy) for a special occasion, such as a 60th birthday or graduation, you’ll need to plan ahead—ideally three or more years ahead. But it is also possible to savor the fruits of your labor at My Craft Distillery much faster.

Because gin and absinthe begin with alcohol in the form of neutral spirits, and brandy starts with wine, these courses do not require any fermentation and thus last just three days. Instead of mash-bill recipes, the gin and absinthe courses begin with an emphasis on selecting botanicals for your flavor profile, making a small test batch, and then scaling it up for a single infusing distillation run through the still. Your gin or absinthe can be taken home immediately, and even if you decide to barrel-age your gin—which is becoming increasingly popular for cocktail lovers—it is still much faster, just one to six months. Brandy making begins with tasting and choosing base wines, followed by two days of distillation runs, but while the three-day production process is faster, it still benefits from lengthier ageing. Rum is the most similar to whiskey and lasts the full five days, starting with molasses rather than a mash bill.

Itineraries are designed for private groups of up to four and include two hotel rooms throughout, a welcome dinner, lunch daily, Wednesday’s full-day outing (for five-day courses), and all the materials and expert guidance for hands-on participation in every step. Lodging is at Louisville’s most historic property, the Brown Hotel (where the city’s signature Hot Brown sandwich was invented), just around the corner from campus. Each session is private, unique, and so infinitely customizable. The whiskey version of My Craft Distillery program costs $18,000 for four participants, which includes your 250 bottles.