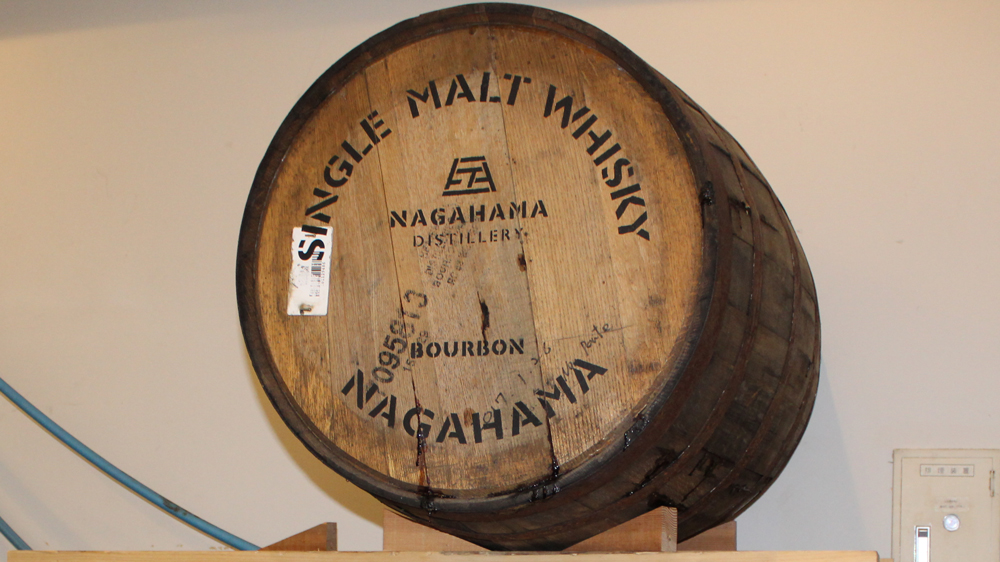 As anyone who has recently tried to score a bottle of Yamazaki or Hakushu can tell you, Japanese single malt whiskies have become as scarce as…well, Japanese single malt whiskies. The reason, of course, is that an unexpected early twenty-first century surge of demand for these previously overlooked spirits took the Land of the Rising Sun by surprise. Consequently, Japanese distillers have found themselves unable to meet this global thirst for their unique whiskies. After all, as we may have mentioned here before, it takes 12 years to make a 12-year-old single malt. Consequently, not only is there a scarcity of Japanese whiskies on most liquor store shelves, it is likely to stay that way for quite some time.

But fear not; there’s a way to ensure that you’ll have a full barrel of Japanese single malt for your personal use in the future. You can even pick the type of barrel it will be aged in, thanks to an exclusive offer to purchase a full cask of Nagahama whisky from this innovative, but little-known, craft distillery located in a central Japanese city of the same name.

It is hardly surprising few people have heard of Nagahama single malt. Having started in 2016, it is not only the newest distillery in Japan, it is the smallest. Nonetheless, Nagahama’s two copper pot stills are already noticeable for producing crisp and elegant spirits, due in part to the limestone-filtered water that flows from nearby Mt. Ibuki, which is combined in a mash bill that includes barley imported from England. The distillation itself is overseen by Scotland-trained master blender Takashi Kiyoi.

So far only a few limited edition single cask bottlings have been released, and most have quickly sold out. But now Dekantá, the exclusive Japanese exporter of Nagahama whiskies, is offering the opportunity for individuals to purchase a full 225-liter cask that has previously been filled (seasoned) with the buyer’s choice of either Madeira, Calvados, or sherry, and which will then be filled with Nagahama’s new-made spirit and allowed to gracefully mature into a much-coveted Japanese single malt. Priced at $15,000 for either a Madeira or Calvados-seasoned cask, and at $17,500 for a sherry cask, there is a limit of one cask per person due to the extreme rarity of the casks themselves. The distillery will then age this whisky for the owner for seven years, free of charge. With an average evaporation rate of two percent a year, it is estimated that each cask will yield approximately 279 bottles of whisky at the end of the seven year period. Additional on-site aging is available for an extra $150 per year.

While longer aging will result in fewer bottles due to “the angel’s share,” it normally produces a whisky with more depth. Also, the type of barrel selected will have a dramatic effect on the whisky’s flavor profile. Generally, Madeira casks will produce rich notes of dried fruits, berries and plums; Calvados casks result in fresh, fruity flavors; and sherry casks create varying intensities of dried fruits and berries.

In addition to the cask of whisky itself, all purchasers will receive a framed title of ownership for their specific cask, a photograph of that cask, a 100 ml sample of an unreleased Nagahama single malt, a 500 ml bottle of a similar style of Nagahama new make (unaged) spirit that went into their cask, and a 700 ml bottle of the distillery’s award-winning Amahagan (Nagahama spelled backwards) World Blend Edition whisky, a unique blend of non-Japanese whiskies that have been combined with Nagahama’s single malt.

For those wishing to acquire a barrel of Nagahama as an investment rather than for future personal enjoyment, the distillery will sell a cask on behalf of the owner any time the purchaser wishes. Either way, Nagahama cask ownership is a unique way to provide a hedge against future Japanese whisky shortages in an uncertain world, along with bragging rights to being one of the few individuals to own a cask of single malt whisky from one of Japan’s most distinctive distilleries.

For cask purchase or for additional information, email Dekantá at cs@dekanta.com.