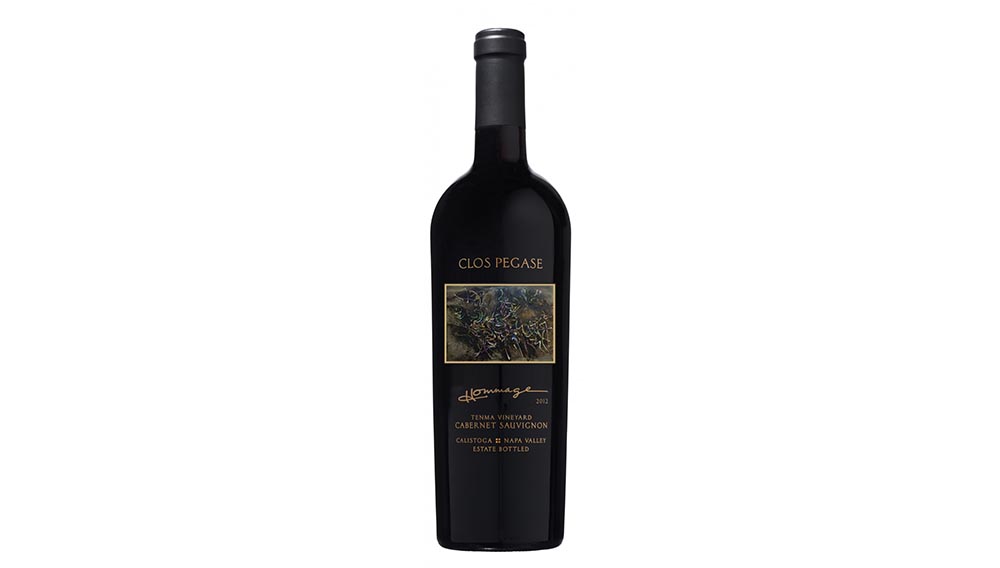 Calistoga, Calif. (April 5, 2016) – Clos Pegase winery in the Napa Valley has released the 2012 vintage of its Hommage Series wines, an estate Chardonnay and Cabernet Sauvignon that feature artwork from Simon Hantai on the label. Estate Vineyards are the heart and soul of Clos Pegase wines, and everything in winemaking revolves around showcasing the distinctive character of the estate fruit. Clos Pegase has four estate vineyards in the Napa Valley, which they have farmed for decades, giving them an intimate understanding of the potential of the land, the unique quality characteristics of grapes that grow there and the potential for greatness of the wines crafted from these singular sources.

Mitsuko’s Vineyard in Napa Carneros and Tenma Vineyard in Calistoga are two of these prized vineyards, renowned for Chardonnay and Cabernet Sauvignon respectively. The most venerable vineyard blocks from each of these sites are considered each year for the Hommage series, which are individually barrel selected wines that pay tribute to the artist that graces the label. The new releases include the Clos Pegase 2012 Hommage Chardonnay, Mitsuko’s Vineyard ($45) and the Clos Pegase 2012 Hommage Cabernet Sauvignon, Tenma Vineyard ($125).

The 2012 Hommage Chardonnay is a pure and precise expression of the best of Old Wente selection Carneros Chardonnay from this remarkable vineyard, which is located in Napa-Carneros off Withers Road. The 365-acre Mitsuko’s Vineyard has proven ideal for aromatically expressive, beautifully textured, minerally Chardonnay over the years, and the 2012 Hommage Chardonnay is a classic example. This wine, perhaps more than any other from Clos Pegase, showcases the natural tension between palate breadth and richness and precisely balanced acidity and deftness that is the hallmark of the Clos Pegase style.

The 2012 Hommage Cabernet Sauvignon captures the essence of Calistoga Cabernet – deep color, intense and uniquely spicy fruit character and generous mouthfeel – and shows why Calistoga is one of the great and most personality-driven regions for Cabernet in Napa Valley. The Tenma Vineyard is in Jericho Canyon in northeastern Calistoga in the foothills of Mount St. Helena. Its rocky, well-drained terrain with sparse topsoil yields a tiny crop of exquisitely concentrated Cabernet fruit, which is a thrill to work with for a winemaker. The essence of the dramatic and wild Palisades bordering Tenma is deliciously represented in this bold yet classically styled wine.

The label for the 2012 vintage pays homage to Simon Hantaï. Born in Bia, Hungary in 1922, Hantaï studied at the Budapest School of Fine Art. He left Hungary for Italy, then relocated to France in defiance of an order of the Hungarian Ministry of Culture to return to his home country and more stifling Soviet state-sanctioned art training. In Paris, he was initially active in the Surrealist movement, but after being influenced by Jackson Pollack, his works took on the simplicity, delicacy and calligraphic emphasis of art which made him known as the graphic side of Action Painting. Initially, this aesthetic combined non-traditional representation and non-traditional uses of paint, as in “Untitled” of 1955 reproduced on the Hommage label, which portrays flame-like arabesques against a dark background.

The Clos Pegase 2012 Hommage Chardonnay and 2012 Hommage Cabernet Sauvignon are available in select stores and restaurants around the country. Additional information is available at www.clospegase.com.

Clos Pegase is a Napa Valley winery renowned for its world-class winemaking, estate vineyards and architectural design that has achieved international acclaim. Clos Pegase specializes in Cabernet Sauvignon, Chardonnay, Pinot Noir, Merlot and other wines made exclusively from its 450 acres of estate vineyards in Napa Valley. The centerpiece of the Clos Pegase estate is its Michael Graves-designed winery in Calistoga, which sits amidst the vineyards and houses state-of-the-art winemaking facilities and a destination for visitors to enjoy fine wine and art. Founded by Jan Shrem in [need year], Clos Pegase is owned by Vintage Wine Estates, which acquired the winery in 2013. Additional information is at www.clospegase.com.