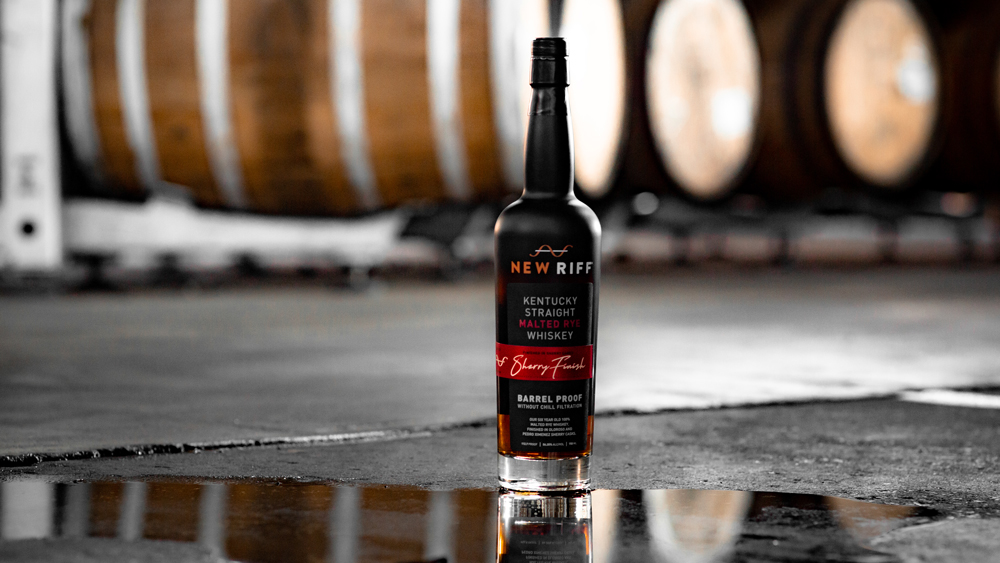 Just like hoppy beer or private jokes among friends, in the world of whiskey, cask finishing can be taken too far. American distilleries have embraced the practice of placing whiskey in a different type of cask after its initial maturation period with gusto over the past few years, and people are divided about its merits. There are relatively brief cask finishes which are concise and have a very clear point, and then there are others that are more meandering and possibly attempts to fix a whiskey that had some flaws to begin with. In all likelihood, Kentucky’s New Riff did not fall into the latter category with its new Sherry Finished Malted Rye Whiskey, because the distillery makes some truly excellent whiskey across the board. And that’s exactly why this new release seems unnecessary, an experiment in cask finishing that has gone past the point of no return.

New Riff’s core lineup consists of bottled-in-bond bourbon and rye aged for at least four years, bottled at 100 proof, and non-chill filtered. The bourbon is made using a high-rye mashbill of 65 percent corn, 30 percent rye, and 5 percent malted barley; the rye is made from a mashbill of 95 percent rye and 5 percent malted barley, similar to the whiskey that comes out of Indiana’s MGP. Then there are the “Whiskey Riffs,” a series of experimental releases that finds New Riff playing around with mashbill and distillation. The new Sherry Finished Malted Rye comes on the heels of last year’s initial release of a 100 percent malted rye whiskey. According to the distillery cofounder Jay Erisman, the point here was to treat this whiskey like any other malted whiskey and not necessarily a rye whiskey, presumably in the way a scotch distillery might finish a single malt. So the New Riff team imported twelve 53-gallon Oloroso and three Pedro Ximinez sherry-seasoned casks from Spain and filled them with five-year-old malted rye whiskey to age for an additional year. The whiskey was then vatted and left to marry for a few months before being bottled at cask strength of 112.7 proof.

The result is a veritable, indisputable sherry bomb. I’m not necessarily opposed to that style as a concept, but the issue here is that the sherry influence overtakes, commands and forces the wonderful New Riff character far into the background. There are notes of raisin, vanilla and spice on the palate, but this is “all sherry everything” to the point that the core identity of the rye whiskey is nearly unrecognizable. Now, maybe that’s the point, maybe the goal here is whiskey transmutation. I’d like to see how this might have tasted with just a few months’ cask finishing, perhaps the effects would have been a bit more subtle. But clearly the New Riff whiskey makers know what they’re doing, and the whiskey they were going for is just not for me.

This limited release is priced at $65 per bottle and was made available through select retailers and the New Riff Whiskey Club. It’s currently sold out there, so your best bet is to explore local stores that stock New Riff, or contact the distillery directly to find a bottle. But, hear me out, you could also hunt down a bottle of the regular 100 percent malted rye, or the wonderful straight rye whiskey, or the single barrel rye, or literally any other New Riff whiskey. No sherry cask finish, no problem.