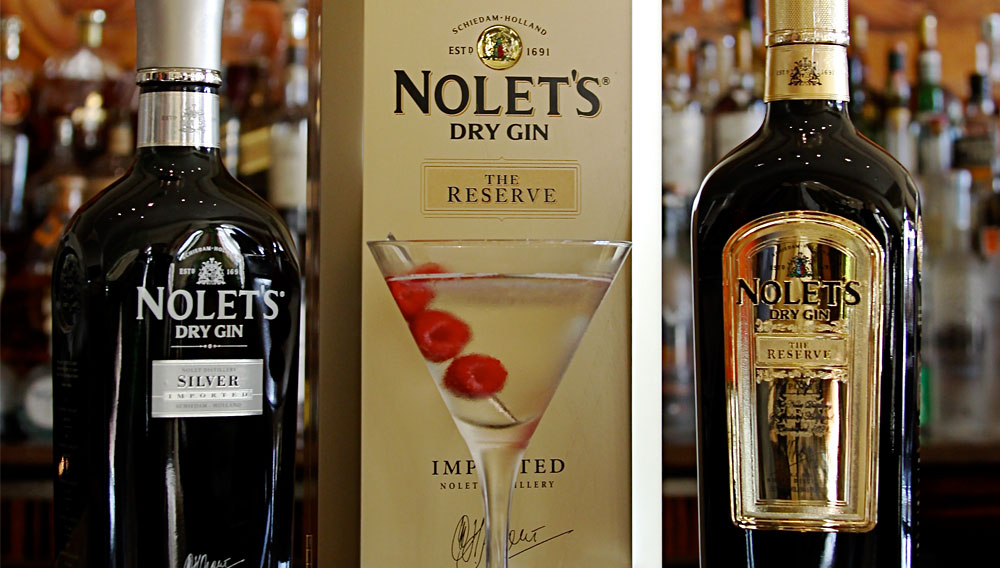 The art of distillation has been practiced for thousands of years; no one really knows who the first distillers were. However, we do know the name of the longest-reigning distilling family in the world. With a 322-year history of distilling, the Netherlands-based Nolet family is currently helmed by 10th-generation Carolus H. J. Nolet—the chairman of Nolet Spirits Worldwide—and his two sons Carl Jr., the executive vice president of Nolet Spirits USA, and Bob, the distiller and executive vice president of Nolet Spirits. Admittedly, their names may not be as familiar as those of their products: Ketel One vodka ($25), Ketel One Citroen ($25), Ketel One Oranje ($25), Nolet’s Silver gin ($50), and what is undoubtedly the most expensive gin in the world: the limited-edition Nolet’s Reserve ($700), which launched its third annual release on May 15. To date, more than 1,500 bottles, each signed and numbered by Carolus, have been sold since the Reserve’s introduction in 2010.

It was Joannes Nolet who started it all, when in 1691 he began to distill genever in the small town of Schiedam, the Netherlands. But it was Carolus who brought the company into the 20th century’s spotlight by creating Ketel One vodka, which was named after the distillery’s 19th-century coal-fired pot still “Distilleerketel #1,” still used in making Ketel One vodka today.

However, the Netherlands has historically been the home of genever and gin—not vodka. That was the hurdle Carolus had to overcome when he introduced his new vodka to the United States in 1983, where he saw a vodka-cocktail culture developing. “Bartenders were paying more attention to vodka than gin,” he notes, “so that’s where I decided to put my efforts.” He capitalized on this by making his new vodka unique, using premium Ultra-Wheat as one of the ingredients and combining copper-pot-still distillation with 15 hours of column distillation. The result was a much richer and smoother-tasting vodka. Since Carl Jr. established the family’s U.S. operations in 1991, Ketel One has become one of the most popular vodkas in the country; it is also sold in 75 markets worldwide.

Their Ketel One success is indicative of the Nolet family’s ongoing determination and innovation. In 2005 they decided to construct the first windmill in the Netherlands in over 100 years; it now supplies the distillery’s energy requirements and features a slanted elevator that takes visitors up the inside of the sloping structure, where they discover a full-screen movie theater. In addition, a few years ago a warehouse had to be built on the opposite side of the canal that runs alongside the distillery. Rather than build an unsightly bridge over the canal, Carolus constructed a tunnel under the canal—a venture that took four years and cost over 50 million euros. It is the only privately built tunnel in the Netherlands. More recently, Carolus decided to return to his family’s roots and introduced a new style of gin to America.

“I was the first one who decided not to produce our original gin,” he recalls, “even though I had already been thinking about a new type of gin. Now, after our incredible success with Ketel One, this new style of gin came back in my mind. So I studied and worked on it for over 10 years, because I wanted to make something different, to create a new way for gin to be enjoyed, not just now, but for decades to come.”

The result of Carolus’s three-year odyssey in search of unusual botanicals was Nolet’s Reserve. Although classic ingredients such as juniper, citrus, orrisroot, licorice, and cassia are used, the rest of the recipe—with the exception of herbaceous verbena and spicy saffron (the most expensive botanical in the Reserve and part of the reason for its lofty price)—is a family secret. However, rose petals, apples, and red berries can be detected in the Reserve’s uniquely elegant flavor. The botanicals are individually pot distilled or macerated, depending on their origins, before being blended together 72 hours prior to distillation, which is done in a custom-built combination copper pot still and column still. Nolet’s Reserve is then bottled at an unusually high 104.6 proof in order to capture the complexities of its thick and spicy flavors. With fewer than 500 bottles produced annually, this is definitely a gin for sipping, not mixing. Appropriately, each year’s release occurs around May 15, Carolus’s birthday.

While Carolus was perfecting his Reserve, brothers Carl Jr. and Bob were creating an unlimited-edition gin: Nolet’s Silver London dry Gin, also produced with both copper-pot and column distillation, but bottled at a slightly tamer 95.2 proof. Nolet’s Silver is also created with botanicals never used before—white peach, Turkish rose, raspberries, and pear, to name a few—resulting in a slightly sweet and heavily floral flavor that makes it the perfect canvas for the ultimate martini.

True to tradition, a member of the family samples every batch of spirits before it is bottled, thus ensuring that the Nolets’ three-century-plus legacy will continue well into the future. (www.noletspirits.com)