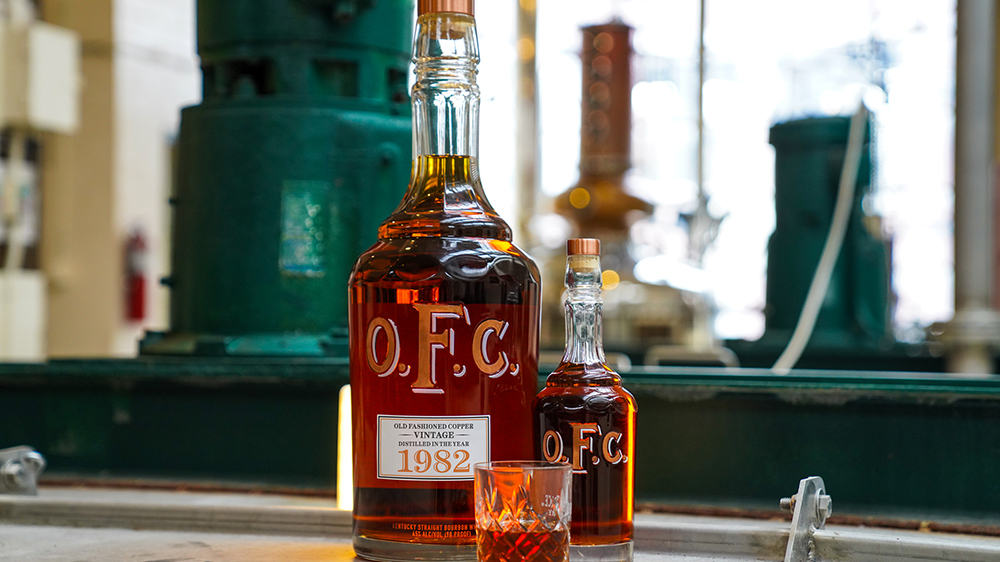 Buffalo Trace Distillery is auctioning five gigantic bottles of coveted vintage bourbon this month, all in the name of charity.

The expression in question is an O.F.C. Bourbon Whiskey that was distilled in 1982 in what was then the George T. Stagg Distillery. Touted as Buffalo Trace’s only vintage-dated bourbon, it has been quietly maturing for more than a quarter of a century while gaining greater complexity.

“This remarkable whiskey transitions to a memorable finish of dried dark fruit with delightful lingering oak,” Harlen Wheatley, master distiller at Buffalo Trace Distillery, said in a statement. “All the time knowing that you’re tasting history as you taste the last drops. This truly is a once in a lifetime taste experience.”

The bourbon matured for more than a quarter of a century.  Buffalo Trace Distillery

Even better, this is the first bourbon in the distillery’s 234-year history to be housed in a “supersized” 6-liter bottle. Standing at an imposing 2 feet, the behemoth is nine times the size of a regular whiskey bottle. It holds more than a gallon of bourbon and weighs a hefty 22.5 lbs when full. Suffice it to say, a bottle of such magnitude is rarely seen on the whiskey market.

It’s not just big, it’s beautiful, too. Like its predecessors in the O.F.C. line, the 1982 vintage comes in a hand-cut crystal bottle with inlaid copper lettering. It’s also presented in a wooden display case alongside a provenance card that notes the milestones of ‘82, like the launch of the first CD player.

The supersized bottle holds more than a gallon of bourbon.  Buffalo Trace Distillery

Because it’s 2022, each whiskey will be sold as a non-fungible token (NFT) on BlockBar during a five-day auction kicking off Monday, March 14. The bottles will have a starting bid of approximately $25,000 that can be made with the cryptocurrencies Etherum or Fiat via a digital wallet.

Each of the five NFTs will represent an actual bottle of O.F.C Vintage 1982. When redeemed, the NFT holder will also unlock a personal invitation to Buffalo Trace Distillery in Kentucky for a private VIP tour. Naturally, you can expect exclusive tastings of whiskeys from the distillery’s private collection, including some previous vintages from the O.F.C. range.

To top it off, proceeds from each of the winning bids will benefit an array of nonprofits chosen by Buffalo Trace, including the James Beard Foundation, World Central Kitchen, Elton John Aids Foundation, the Art of Elysium and 261 Fearless. Now that’s certainly a reason to sip.