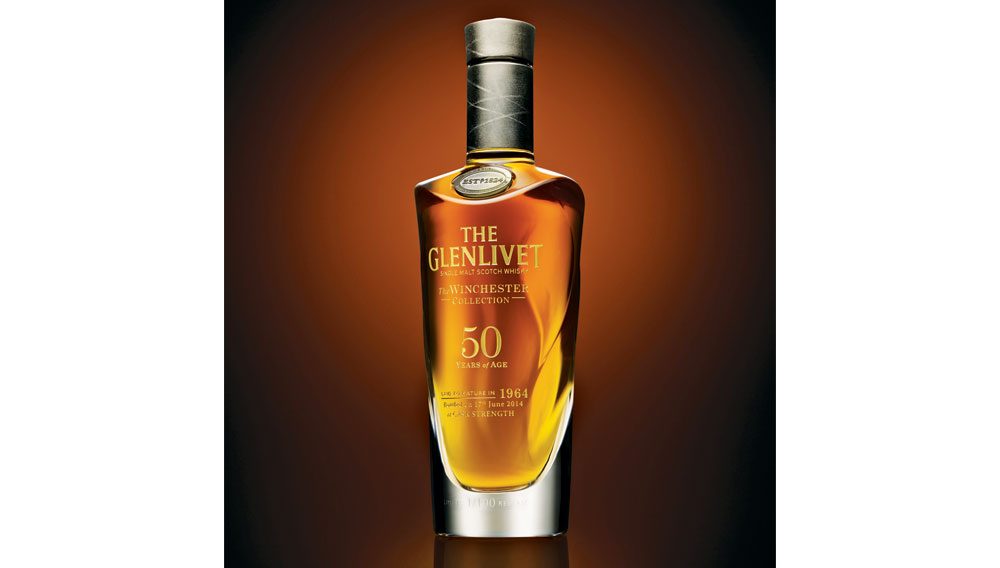 The first release of the Glenlivet’s new Winchester Collection represents a rendezvous with destiny.

In September, the Glenlivet announced Vintage 1964, the inaugural release of the distillery’s Winchester Collection of 50-year-old whiskies. Although a mere 100 bottles of this rare offering, each priced at $25,000, will make their way to the marketplace, other 50-year-olds in the collection will follow. While a half-century-old single malt tells a flavorful tale of its own, this example serves as a potable postscript to 200 years of family history and the remarkable story of the man who barrelled it.

This individual was Captain Bill Smith Grant, the last descendant of the Glenlivet founder George Smith. In 1964, Smith Grant placed this distillate in a former-bourbon cask, and the spirit has remained under close watch ever since. Earlier this year, the Glenlivet’s current master distiller, Alan Winchester—for whom the new collection is named—deemed the aged whisky ready to bottle.

Some four decades prior to filling this barrel, Smith Grant had inherited the Glenlivet, a legacy originally earmarked for his older brother, Captain John Gordon Smith Grant, who in the spring of 1918 turned 25 and became eligible to claim the distillery. John planned to attend to this matter when he returned to Scotland from France, where he was recovering from wounds sustained during the last days of World War I. Sadly, he never made the journey home: On May 31, 1918, German bombers obliterated the hospital where he was recuperating and, with it, the Glenlivet heir.

As a result, Smith Grant the younger, who otherwise would likely have remained the distillery’s second in command, suddenly held the keys to the kingdom built by his great uncle, George Smith, the first moonshiner in Scotland’s Speyside region to obtain a distiller’s license, which he did in 1824. Smith, whose newly acquired legitimacy rankled the hordes of whisky smugglers in these hard-to-police highlands, famously protected himself from his rivals with a pair of pistols gifted to him by his licensor, the Laird of Aberlour, for this very purpose.

Smith was indeed willing to draw blood to protect his newly lawful enterprise, which benefitted from government-sanctioned distribution channels and less-stringent distillation requirements than the traditional methods aggressively upheld by the established—albeit illicit—order. Unlike the old guard’s peat-heavy whisky, Smith’s product was light and sweet, emphasizing the malt’s rich undertones and the oak in which it aged—characteristics that have come to define Speyside single malt.

True to this tradition, the Glenlivet Winchester Collection Vintage 1964 bursts with essences of pear, orange, and black cherry and reveals notes of toffee and caramel, according to Winchester. Though only a few fortunate beneficiaries were able to share in Smith Grant’s liquid legacy, which went on sale at Harrods in October, fate will soon intervene in the form of the Vintage 1966, whose release date has yet to be divulged.