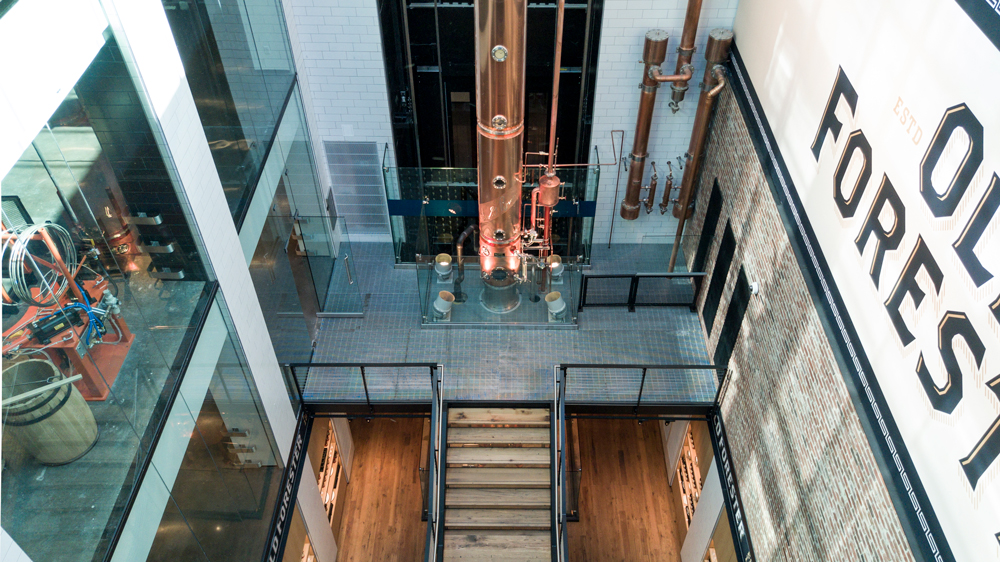 What’s old can be new again. Like this week in Louisville, Kentucky, on Whiskey Row. On June 14—no coincidence, National Bourbon Day—the distillery that’s credited with being the first in the country to seal bourbon in glass bottles is opening its new, but very old, facility at 119 W. Main Street, the historic heart of Kentucky’s historic bourbon industry.

This is a homecoming for Old Forester Distilling Co. It’s the original and signature bourbon brand for Brown-Forman Corporation, and it’s once again occupying the building that first housed its offices and bottling operation. In a swath of the city that once boasted 89 distilling facilities, Old Forester holds a singular position: It’s the only bourbon sold by the same company before, during, and after Prohibition, that famously failed temperance experiment that disrupted the entire spirits industry in this country.

Old Forester’s industry-backbone status is the stuff of history, though. In 1870, George Garvin Brown, a young pharmaceutical salesman, aimed to set some things straight in what was then a murky bourbon business, where whiskey of questionable quality was sold in barrels and splashed into jugs (the original growler culture). Sealing his bourbon in glass bottles, he made quality a transparent thing, and locked up the company trademark to this day: “America’s First Bottled Bourbon.” The product’s namesake, Dr. Forrester, prominent local physician and friend of Brown’s, entirely approved—of course medicinal whiskey should be sold only in sealed glass bottles. (After his death, the company dropped one of the “r’s” in the name.)

Of course, no history of an old whiskey company is complete without the Prohibition question. What happened during those 13 years, from 1920 to 1933? In Brown-Forman’s case, great good luck. The company applied for, and received, one of only six federal licenses in Kentucky to continue selling bourbon—for the aforementioned medicinal purposes, of course.

The new distillery and visitor center opening this week is an architectural feat, tucking almost every step of the distilling process into dramatic vertical spaces against the backdrop of historic brick walls. Even barrel making, with all the toasting and charring that’s involved, is on display. (Old Forester is the only downtown distillery with a fully operational cooperage.) Guests can also see mash fermenting in large vats, distillation in the 44-foot-tall copper column still etched with the signature of George Garvin Brown, bourbon aging in soaring tiers of white oak barrels, and barrels rolled out to old trucks on the street, in a sweet nod to history.

Current Brown-Forman president, Campbell Brown, puts it this way: “Nearly 150 years ago, my great, great grandfather, George Garvin Brown, signed and sealed Old Forester with a pledge to craft bourbon of the highest quality and utmost consistency. We’re thrilled to return to our former home and share with the world the spirited story of the ‘hometown bourbon of bourbon’s hometown.’”

In honor of Old Forester’s return to Whiskey Row this week, the company is releasing a new version of The President’s Choice single-barrel bourbon. This brings back a tradition first introduced commercially in 1964: The president of the company would choose one barrel he thought embodied the best of Old Forester. Making the new iteration a true president’s choice, Campbell Brown worked closely with Old Forester Master Taster, Jackie Zykan, to pick the barrel that matched his bourbon taste.

The two report that it was no easy task. Zykan would send Brown home with an assignment to taste 20 samples, in the cause of narrowing his profile preference—which, as it turns out, leans to the sweet, robust, and spicy. Florals and spices (anise, clove) on the nose of the barrel he chose mix it up with vanilla and grilled tangerine. The flavors build on that spice with citrusy caramel and a savory rye finish. Generally aged 8 years, The President’s Choice Old Forester will be bottled at 110 to 120 proof (this release is 111) and retail for $89.99 (although precious little is available).

While Brown-Forman Corporation is a large company today, with holdings that include Jack Daniel’s, Woodford Reserve, Early Times, and Herradura, Old Forester Distilling Co. remains the touchstone of the group, delivering on the original promise of quality and consistency in Kentucky bourbon.