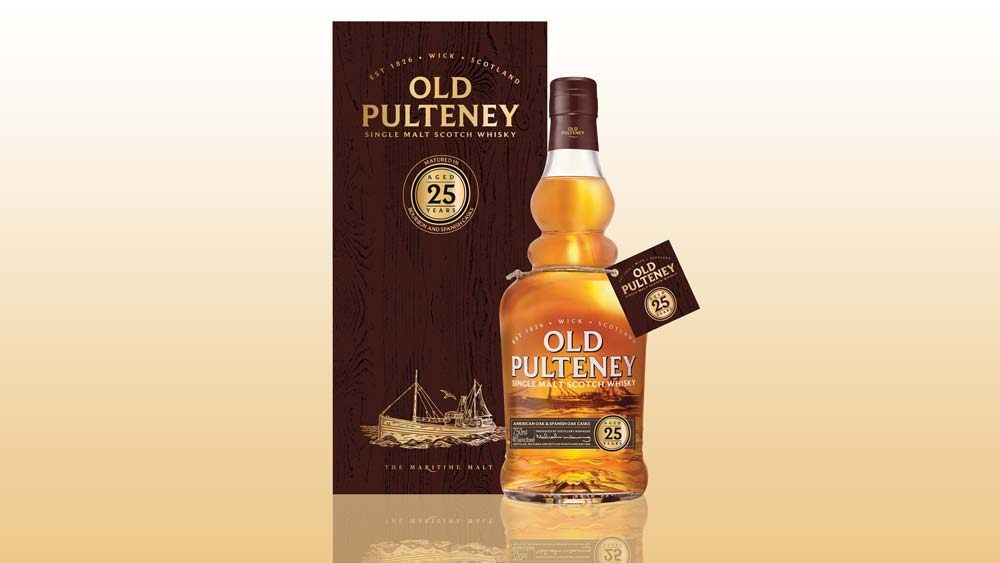 The Pulteney distillery in the Scottish Highlands is the namesake of one Sir William Pulteney, a politician and landowner who at the time of his death in 1805 was purported to be the wealthiest man in all of Great Britain. And while he may have died with full coffers, surely there must have been a modicum of emptiness in poor Sir William’s soul—for you see, he shuffled off this mortal coil a good two decades before the Pulteney distillery produced its first dram of precious whisky. That’s right, Ol’ Pulteney never got to taste Old Pulteney . . . and that is a dying shame.

It may not enjoy the name recognition of some of its celebrated neighbors, but make no mistake—Old Pulteney is an estimable single-malt Scotch whisky produced at the second most northern distillery on the Scottish mainland. Few, if any, expressions in the brand’s portfolio are as arresting as the 25 Year Old ($599), a mere 440 bottles of which have recently been allocated to the United States.

It’s a marvelous whisky, mellowed for 22 years in ex-bourbon casks before spending three more in ex-oloroso Spanish oak butts, imparting a spicy sweetness and glimmering bronze color. Old Pulteney is affectionately known as the “maritime malt,” and the effect of marinating for a quarter-century in the invigorating sea air of Wick is unmistakable—the oily mouthfeel and brininess serve as a perfect counterbalance to the expressive dark chocolate and honey flavors that are evident straight away. As the whisky begins to open up, citrus notes, honey, and baked apple are also revealed. The finish is a marathoner, awash in an array of taste-bud tantalizers, including sweet biscuit, cinder toffee, and black walnut.

The extremely limited supply of Old Pulteney 25 Year Old is not expected to last long, so get some while the gettin’s good. When you do, be sure to raise a glass to Sir William, who never knew what he was missing.