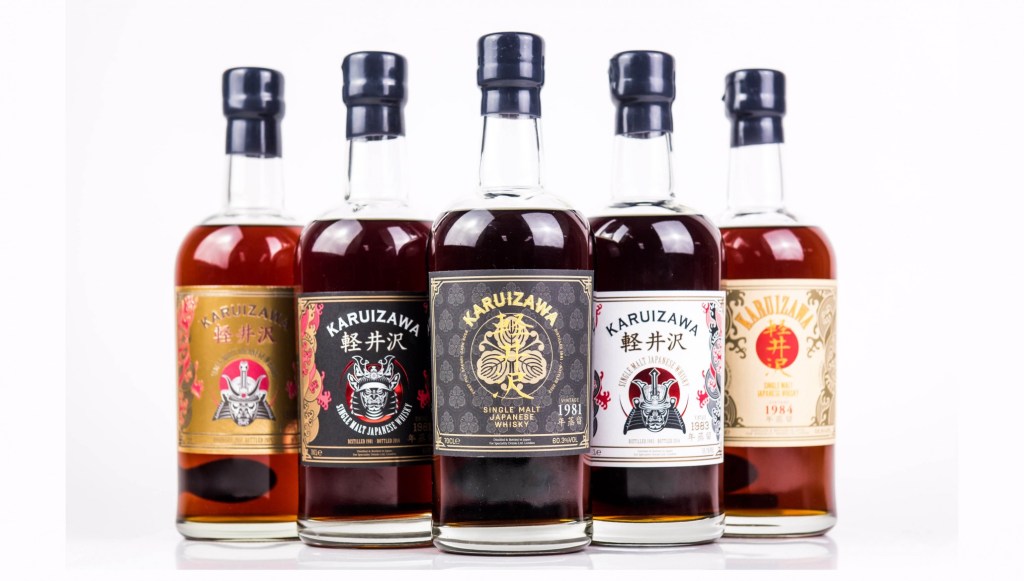 For collectors of Japanese whisky, the 0 is a holy grail, one of the rarest and most sought-after whiskies ever made. Aged for 52 years and limited to 41 bottles, it sold for a record $118,500 when it was last auctioned in 2015. Now another bottle has gone on the auction block, along with the most comprehensive collection of Karuizawa whiskies ever brought together in one place. The auction, held by the Scotland-based Whisky Auctioneer, features just over 290 bottles (each to be sold individually) from the legendary distillery, which closed in 2000.

In recent years, the Japanese whisky market has exploded internationally, with exports increasing a staggering 179 percent from 2011 to 2015, according to the USDA Foreign Agricultural Service. The boom has translated to the secondary market as well, heightening interest in older bottlings as well as those from “ghost” distilleries like Karuizawa, which are no longer producing whisky but still have limited supplies of older stocks for aging and bottling. The Rare Whisky Karuizawa index, which tracks sales of collectible whiskies from the distillery, reports that select Karuizawa bottles have increased in value more than 300 percent since 2013. They’re prized not just for their rarity but for their quality. Iain McClune, founder and owner of Whisky Auctioneer, says, “[The] Karuizawa distillery was known for producing whisky of the finest quality and using only the finest ingredients to make it. Barley was imported from Scotland and sherry casks from Spain which, when combined with a water source that flowed through the volcanic lava rock around the distillery, provided its whiskies with a unique mineral quality.”

The collection was acquired by Whisky Auctioneers from a single anonymous collector in Germany, who had amassed the collection over a decade. “The fact that a close-to-complete collection of Karuizawa has never been presented at auction previously makes this a rather momentous sale,” says McClune. “We don’t know his rationale for parting with the collection. However, it’s very likely that he will have been tracking the phenomenal performance of Karuizawa whisky at auction.”

Others looking to diversify their whisky investments will have much to appreciate in the auction’s 290 individual bottle lots. More than 230 of them are single cask offerings, which means only one cask — holding a few hundred bottles of whisky or less — was used in the creation of that whisky. Apart from the 1960 bottling, some of the rarest Karuizawas include a 50 Year Old, distilled in 1963, and a 48 Year Old from 1964. One of McClune’s personal favorites is the 1984 Single Cask No. 2961, which, he says, is one of only 12 bottles given to attendees of a dinner thrown by the Number One Drinks Company — the corporation that bought the Karuizawa’s remaining stocks after the distillery shuttered its stills.

Given the fervor for Japanese whisky, the 1960 has a good chance of fetching more this time than it did two years ago. But not all the bottles will reach the six-figure mark; most are expected to fetch closer to $2,500 and up, providing an easier entry level into the world of Karuizawa for collectors. Bidding begins on April 5 and ends April 17. (whiskyauctioneer.com)