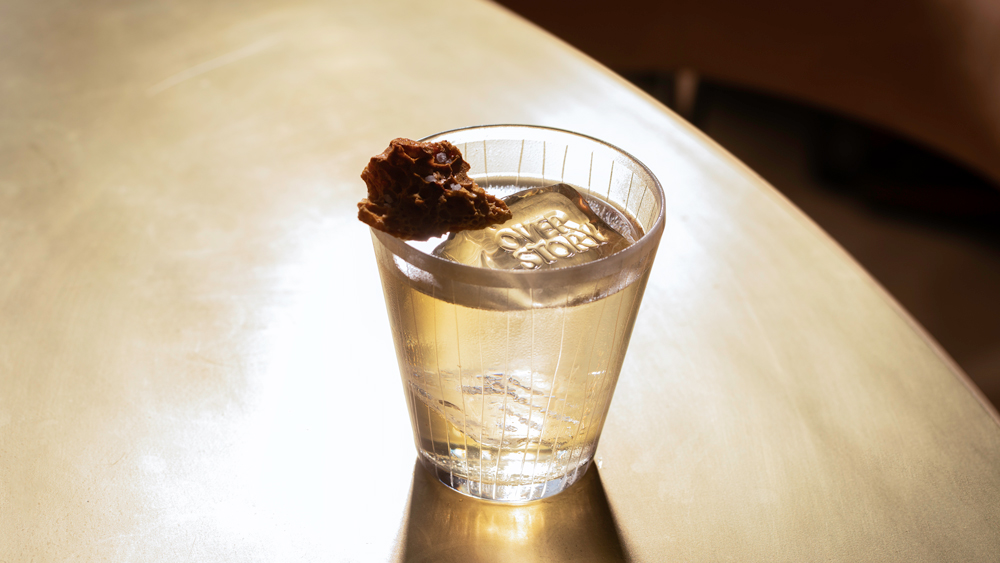 On a recent Wednesday night, while sipping a Terroir Old Fashioned in front of a pink tuxedo-clad bartender, I asked the gentleman next to me what brought him to Overstory. “Cloud hopping,” he said. After downing his Monkey 47 martini, and despite the chill of late autumn, he and a date walked out onto the bar’s expansive terrace to watch New York, its bridges and streets like brightly lit blood vessels, coursing below.

Located on the 64th floor of 70 Pine Street—right above James Kent’s new tasting menu spot, Saga—Overstory is among a crop of new sky-high bars in the city. There’s Panorama Room over on Roosevelt Island, Peak on the 101st floor of 30 Hudson, and Union Square Hospitality’s Aprés at One Vanderbilt in Midtown.

But Overstory was built for more than its views. “I want it to be the best bar in the world,” says bar director Harrison Ginsberg. And he might just will it to happen.

Since it opened in August, a procession of bartenders, spirits world elite and booze media have visited the elegant, intimate, rose-hued bar. “It’s this little gem,” says Dale Degroff, who presided over the bar at the legendary Rainbow Room in the ’90s at the beginning of New York’s cocktail renaissance. “The only downside is you can’t just walk in. It’s sold out for weeks.”

After Steve Olson, partner at Del Maguey mezcal and co-founder of Bar 5-Day, spent an evening at Overstory, he penned a quick email to his global team, telling them: “I’m pretty sure this might be the most exciting cocktail bar in the world right now.”

“Because of his culinary background and expertise, because he’s worked with progressive chefs and barmen, Harrison continues to push the envelope beyond what most people think is possible,” Olson says.

Take the bar’s 212, described on the menu as whiskey, vermouth, cocoa nib, amaro, black pear. The cocoa nibs are inoculated with koji, fermented and then infused into the whiskey; adapting the technique used to make black garlic, Ginsberg’s team produces black pear jus by holding the fruit at a warm temperature for an extended period of time, until it’s completely caramelized.

“We’re not creating new techniques. We’re taking techniques we find and making them our own,” Ginsberg says. “To further develop the way we achieve flavor, that’s the goal.”

Ginsberg was drawn to cooking before cocktails. Raised just outside the city in Westchester, he idolized an uncle who owned restaurants in New England. As a surly teenager, he worked at a not-exactly-above-board Italian restaurant, at first for free and then for $100 bills. That job was cut short when the owner was investigated for fraud, but Ginsberg found new ones as a busboy, food runner and server.

For college, he enrolled at Johnson and Wales in Providence to become a chef; 7 am culinary labs soon broke him of that notion. Instead, he was drawn to spirits and cocktail classes. Over school breaks, Ginsberg would visit New York and sneak into PDT, Pegu Club, Milk & Honey and Little Branch on a fake ID. Eventually, he begged his way into an unpaid barbacking gig at The Dorrance, a new-at-the-time Providence restaurant with a serious bar program.

After graduation, New York was too obvious a choice, a veritable high school reunion for Ginsberg, who chose to move to Chicago instead. There, he landed at high-volume restaurant, bar, and kind-of-a-club The Dawson, whose drinks were designed for speed and fun.

That’s where I first met Ginsberg, rather serious and wearing a lengthy floral tie, back in 2015. Despite sampling many, many drinks that night, I can still remember a Ginsberg original inspired by Pechuga mezcal, a style of mezcal distilled with a raw chicken or turkey. His “Buried Alive” was composed of tequila, pork jerky-infused mezcal, Gran Classico, lemon, peach and a sprinkle of bee pollen, and served in a vessel mimicking the clay pots used to make traditional mezcal.

The Dawson’s bar program was quite good, better than it needed to be for such a high-volume spot. The team pushed the limits of batching and kegging before it was the industry norm. Ginsberg and bar manager Clint Rogers developed conceptual menus and commissioned custom glassware for the 230-seat space (not counting patio seating in season).

After three years of building confidence and contacts, Ginsberg started looking back toward New York. “The universe was working its magic, and I got a call about an opportunity at Dead Rabbit,” says Ginsberg.

Within six months of arriving, Dead Rabbit earned the No. 1 spot in World’s 50 Best Bars. Their next project, BlackTail, won Best New Cocktail Bar in 2017. “I was there at a pivotal moment. Everyone I was working with was the best in my mind. I got more refined, got better,” says Ginsberg, who also discovered the benefits of globally recognized excellence. Trips, education, partnerships and high-paying gigs followed.

But he missed restaurants and the gold mine of inspiration he could find in a walk-in. “Harrison’s culinary background is something I gravitated to,” says Rogers of their time working together in Chicago. “I consider myself a restaurant guy before a bar guy. Harrison had that too. We were always pulling thighs out of the kitchen and working with the kitchen crew.”

Enter James Kent, Jeff Katz, and their multi-year vision for 70 Pine Street, the former home of AIG. They’d start with bustling ground-floor restaurant Crown Shy and build their way up to fine-dining, tasting-menu-only Saga, and one floor above a crown jewel cocktail bar, Overstory. Ginsberg joined bar director Jonathan Lind on the condition that he would help mold the program, and all of Ginsberg’s training started to snap into place during months of R&D sessions.

His cocktails got lighter. Their structure changed to accompany food. He wanted to serve sessionable, iconic drinks and though he says he wasn’t “all that confident” about his initial list, Ginsberg’s very first drink for Crown Shy, the Captain Kidd plantain Old Fashioned, is still on the menu.

That vision is further crystallized at Overstory, the menu the product of an unexpectedly long COVID-era development process. “The space dictated a lot for me; it’s minimal but elegant, and I wanted the drinks to feel that way,” Ginsberg says. “There are minimalist ideas, clarity in flavor, and clarity, quite literally.”

Achieving “clarity” in cocktails takes an immense amount of technique. He’s fermenting, infusing, and centrifuging components. Even his vodka soda (the exceptionally refreshing Easy Money) gets a coconut fat wash. But Ginsberg would rather guests order a second Montego Slay than contemplate the effects of New England IPA yeast in its fermented mango-husky cherry syrup.

Of course, it’s possible to do both, and Ginsberg’s bar team will happily oblige if you’re curious about how long they infuse vodka with green tea for the drinks-like-expensive-water Gyokura Martini. They’ll also give you the backstory on all the ingredients in the Terroir Old Fashioned, definitively the best cocktail I’ve had all year. Rich yet subtle, it’s a mixture of palo santo-infused reposado tequila, vin jaune and yellow Chartreuse topped with caramelized agave candy (think “Squid Games” dalgona candy) and sea salt harvested from Fort Tilden in Queens.

“We can see Fort Tildon from the terrace,” Ginsberg says. “Once we get through opening season, we’ll harvest the salt as a bar team. When you touch and see ingredients, it really gives a drink purpose and meaning.”

Beyond the cocktail list, “the spirits selection is extraordinary,” according to Degroff. There are high-end and rare spirits like vintage Chartreuse, rye finished in rhum agricole barrels and sunchoke spirit made in the style of mezcal.

There’s also the hospitality, something Ginsberg has been cultivating since his days at the Dorrance, where he learned to be a bartender first and drink maker second.

“That’s really the most amazing thing: the service, the feeling, the energy, the love,” Olson says. “Quite frankly, it’s hard to do that. The higher the level of elegance, the higher it is geographically, you add pretense at every level. But you never feel that from the time you’re greeted at the door to when you’re ushered out by the host.”

And that’s what guests should expect from a world-class bar. “They’re going to get amazing drinks, executed near perfect every time, and a personal experience with bartenders,” says Ginsberg. “And, of course, the view is crazy.”