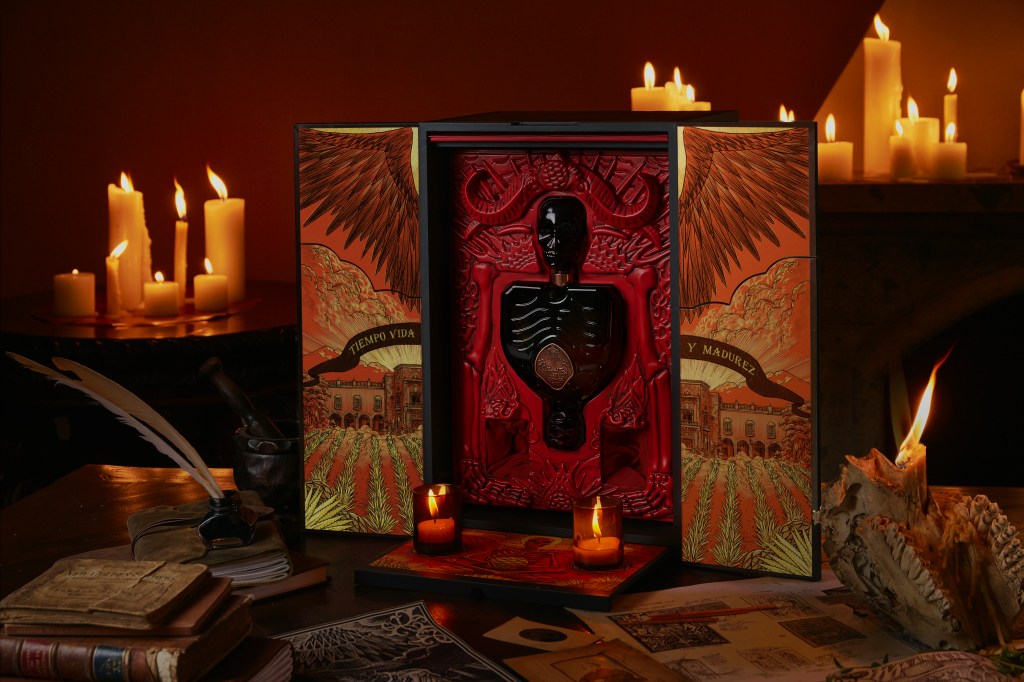 Though he’s one of the motion picture industry’s most marketable directors, Guillermo del Toro has by and large avoided product-endorsement opportunities. But then, Patrón offered the Guadalajara native the chance to collaborate on not only crafting his own signature tequila but designing the exquisite packaging, as well. “I decided to take a shot—maybe two,” he quipped. “I grew up in Jalisco, where tequila runs through people’s veins.”

The acclaimed director of Pan’s Labyrinth and Hellboy was on hand at a recent party in Los Angeles for the launch of Patrón x Guillermo Del Toro ($499), an extra añejo housed inside a work of art that sprung from del Toro’s prodigious imagination. “I wanted the experience of drinking this tequila to be a ritual. That was the guiding principle in the whole process,” he said.

The outside container—a case the size of a small guitar amp—is covered in a black-matte cover that peels away to reveal a box detailed in black-and-silver drawings of skeletons harvesting agave. The box then unfolds into an “altar” with a warm red and orange color palette, adorned with illustrations of agave fields and the Patrón distillery. The two candles included are meant to be placed on a drawer that slides out from the interior of the box. The centerpiece of the display is the bottle—which is actually two bottles, in fact. The bottom 750 mL container, which holds the tequila, is inverted and resembles a winged monster straight out of a del Toro film. This “torso” is topped with a small, skull-like 100 mL bottle containing aged orange liqueur.

The tequila itself is a blockbuster, too. Del Toro desired a robust aged blend replete with vibrant honey, vanilla, and citrus—and Patrón’s legendary master distiller Francisco Alcaraz delivered. It’s a well-balanced, agave-forward tequila that finishes long and smooth with a whisper of oak. The bold orange flavor of the accompanying liqueur enhances the sipping with notes of clove, toasted biscuits, and caramel.