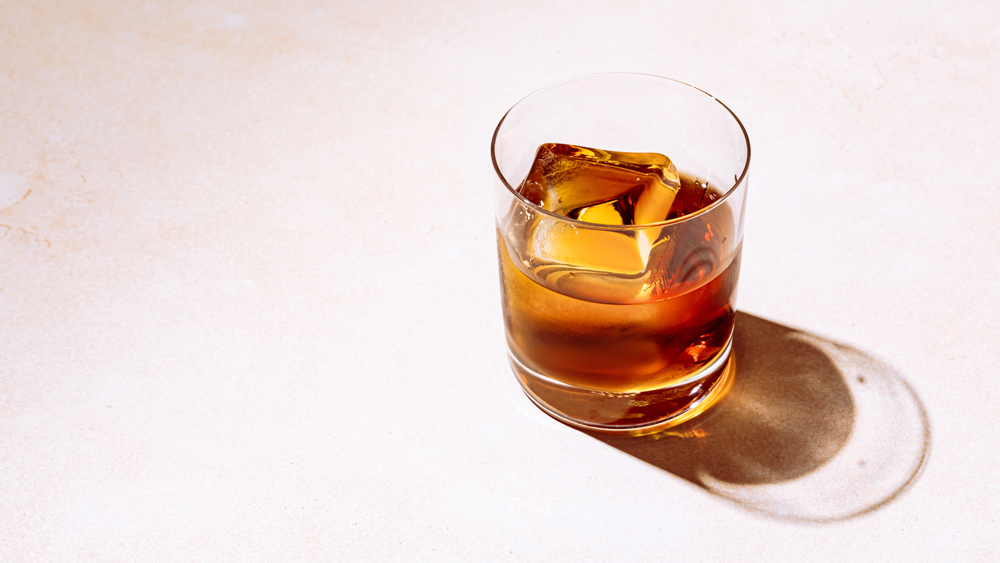 I’m big enough to admit it—I have a problem. Or rather, it would be a problem if I cared to fix it. It would be better to call it an obsession.

I love peanut butter. On crackers, on sandwiches, on a banana, you name it. I believe that out of all of a sliced apple’s worthy co-stars, it’s with peanut butter that she has the best chemistry. No matter what I pass the candy aisle for, it’s the Butterfingers that are softly calling my name, and I don’t think it’s at all controversial that a spoonful of peanut butter straight from the jar is a perfectly acceptable snack.

I think I can assume the previous paragraph filtered out all the haters, and that if you’re still reading this, you at least partially agree. And now that we’re all friends here, I’m going to divulge the secrets of one of the best drinks I’ve ever created in my fifteen years of creating drinks. May I present: The Peanut Butter Old Fashioned.

When I first made this in 2015, the whole idea of peanut butter whiskey seemed confusing and impossible, like if someone offered you unicorn jerky or candied air. Now, of course, with the meteoric rise of Skrewball Peanut-Butter Whiskey (and its wake of shameless imitators), Americans have become used to the idea, but that doesn’t mean everyone’s a fan of it. You may believe it to be either a light whiskey over-sweetened and saturated with chemicals that obliquely resemble peanut butter, or else a homemade turbid sludge that looks like gutter water. I humbly offer an alternative.

What we want here is the same thing we want in any infusion—for it to look more or less like it did before, just with the flavor of the thing we infused. To this end, peanut butter comes with two problems: One, that it’s very hard to filter out once it’s in a liquid, and two, there’s a bunch of oil, which you absolutely don’t want in your final product. The former is solved by patience, the latter technique (instructions below), but the point is that it is absolutely possible to make a perfectly clear, robustly delicious peanut butter infusion into your favorite spirit.

Once you do that, it’s a short journey to the Peanut Butter Old Fashioned. Everyone’s first instinct is to mix it with some kind of berry—the proverbial “jelly”—but by and large this is a mistake, as the oak in the whiskey acts like a third wheel, interrupting their normal magic. Far better is to go with complementary flavors, ones that are traditionally coded as “sweet” even if the drink itself isn’t sweet at all.

For the Old Fashioned, it’s a healthy pour of peanut butter bourbon, sweetened not with sugar but with the Spanish liqueur Licor 43, which is complex but tastes most strongly of vanilla. This is then spiked with some dry chocolate bitters, which add spice and a wonderful background cocoa note. Peanut butter, bourbon, vanilla and chocolate—I mean, what could be better than that? At the bar we garnish it with toasted marshmallows, because being an adult means we can do whatever we want. Like make Peanut Butter Old Fashioneds. Isn’t life grand?

Add all ingredients to a rocks glass over the biggest piece of ice you have that will still fit into the glass. Stir five to 10 seconds, garnish with toasted mini marshmallows on a pick, a Reese’s Peanut Butter cup, a peanut-butter cracker or nothing at all.

Peanut Butter Bourbon: Brand of bourbon isn’t that important, choose whatever you like to drink. If you’re at the liquor store right now and need direction, I’d go with Elijah Craig, which is excellent and affordable and tastes a little like peanut butter anyway. That being said, I haven’t had a bourbon I haven’t liked this with, so you do you.

There are two things to say before I breakdown the process. One is that if you want it clear, you will lose some whiskey to the infusion process. Unless you own a centrifuge, there’s just no getting around that. The second is that while it tastes alright on its own, it doesn’t really open up until it has even a tiny amount of sweetness behind it. That’s why the Old Fashioned build is so perfect.

So to create your infusion, for one 750 ml. bottle of bourbon, you’ll need about a cup of peanut butter. Really all you need to do is put them in the same place and let them sit for one to three days, but there are a couple tricks that can make your life easier when it comes to straining. The first and easiest is the put the peanut butter in a toddy cold brew coffee filter and steep it in the whiskey like a tea bag. That way, you can remove it when the infusion’s done and there will be no solids. The other is to spread the peanut butter thin in a baking dish and pour the whiskey on top of it, then cover and let sit. This maximizes surface area so you don’t need to stir.

Straining is in two parts: First, put the whiskey through a coffee filter to get all the peanut butter solids out. You may have to switch filters once (or more!) if there are a lot of solids, but eventually it will drain. Now, what you should have is clear whiskey with globs of peanut oil on top. To remove the oil, pour the whiskey in a sealed container and put the container in the freezer. Over a few hours, everything that’s not whiskey (the fat) will freeze and once frozen, you can pour just one more time through a coffee filter: The fat will be left behind and you’ll have a perfectly clear, perfectly delicious, peanut butter whiskey. Enjoy.

Chocolate Bitters: Some cocktails require a specific brand of chocolate bitters. This one doesn’t really, but all the same, I still use/prefer the Bitterman’s Mole Bitters. I recommend these so much you might wonder if they pay me—they do not. I just believe they’re the best around for cocktail work. If using them, use them sparingly, they’re quite bitter.

Garnish: As I mentioned, at the bar we put three baby marshmallows on a pick and toast them with a brûlée torch, an homage to the mighty fluffernutter. This can be a little weird because the marshmallow is sweet and the cocktail isn’t, so it messes with your palate, but it’s so much fun we do it anyway. Feel free to omit this.

Our resident bartender Jason O’Bryan mixes new new drinks and classics every week. Check back for a new cocktail recipe every Thursday.