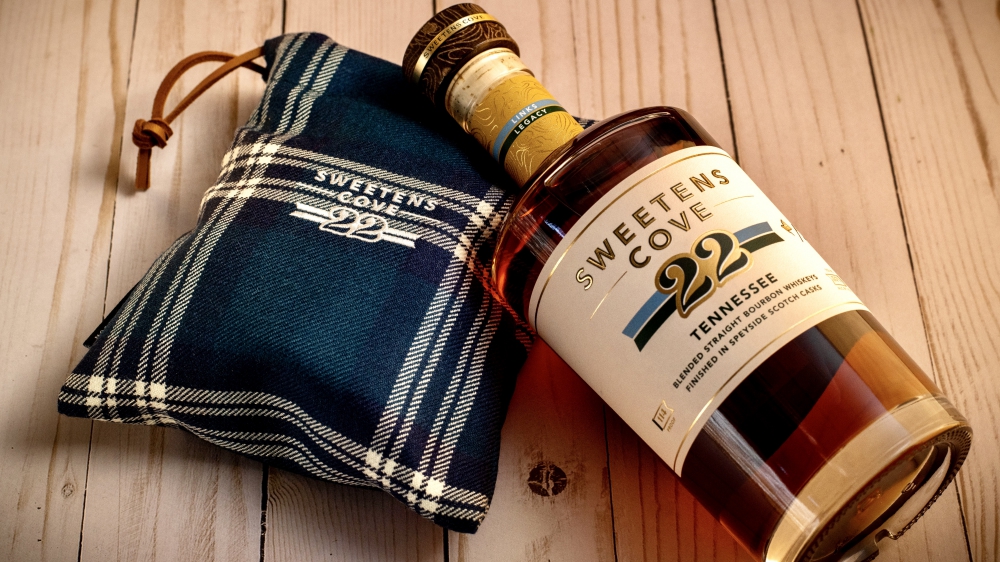 Do we still care about celebrity spirits? The answer seems to be yes, but hopefully we can look pointedly at the pointless by now and realize that the liquid has to be good regardless of whose name is on the bottle. In the case of Sweetens Cove, co-founder Peyton Manning’s name might not be on the label, but he is arguably the most famous face behind the brand—and more importantly, the latest whiskey release is quite good.

Actually, all of the whiskey from Sweetens Cove has been pretty good so far, from the inaugural Tennessee bourbon blend to last year’s Kennessee, a blend of Kentucky and Tennessee bourbon finished with toasted sugar maple wood staves. Another name you may recognize behind the brand is tennis player Andy Roddick; and yet another name you should be familiar with is Marianne Eaves, the master blender who selects the barrels that make up the whiskey (and just launched the second edition of her Eaves Blind tasting kit).

The new Sweetens Cove 22 is a blended straight Tennessee bourbon that is said to be inspired by the lineage of Tennessee bourbon and scotch casks. It’s made up of four whiskeys aged for five, six, eight and 10 years. What makes this blend unique is that, in a relatively unusual step, it was finished in scotch whisky casks from the Speyside region. According to a rep for the brand, the barrels were brought to the States about a year ago from an undisclosed distillery (there are so many, let your imagination run wild). These first-fill bourbon barrels did not contain any peated whisky, and were “adapted to our climate” before being filled with the whiskey blend for an undisclosed finishing period. The final blend was bottled at a relatively high 114 proof.

Yes, the whiskey secrets are strong in this one, but blenders and distillers don’t always willingly give up their tricks of the trade. But we can reveal what a first sip of this bourbon gives up. The notes that immediately jump out, both on the nose and palate, are brown sugar and honey—and the latter can also be found in the nice coating mouthfeel of the whiskey. There is a nice balance of barrel ages, as the liquid reads neither young and green nor oaky and old, occupying a happy middle ground instead. So what does that scotch barrel finish bring to the whiskey? It’s hard to say exactly, maybe it’s that honey note, a hint of malt or an extra burst of vanilla. Without trying finished and unfinished versions back-to-back one can only speculate, but whatever it is it works. And don’t sweat that proof, because it sips and noses smoothly (apologies to those who hate that word, but it’s true) without an alcohol bite.

Sweetens Cove 22 (SRP $200) is rolling out in stores in Georgia and Tennessee now, and will be available in 10 more states over the next few weeks. All credit due to Eaves for coming up with another good whiskey, and putting the art of blending into the spotlight where it belongs as others like Barrell Craft Spirits and Kings County Distillery are doing. This might be a tough bottle to get your hands on, but you won’t be disappointed if you do.