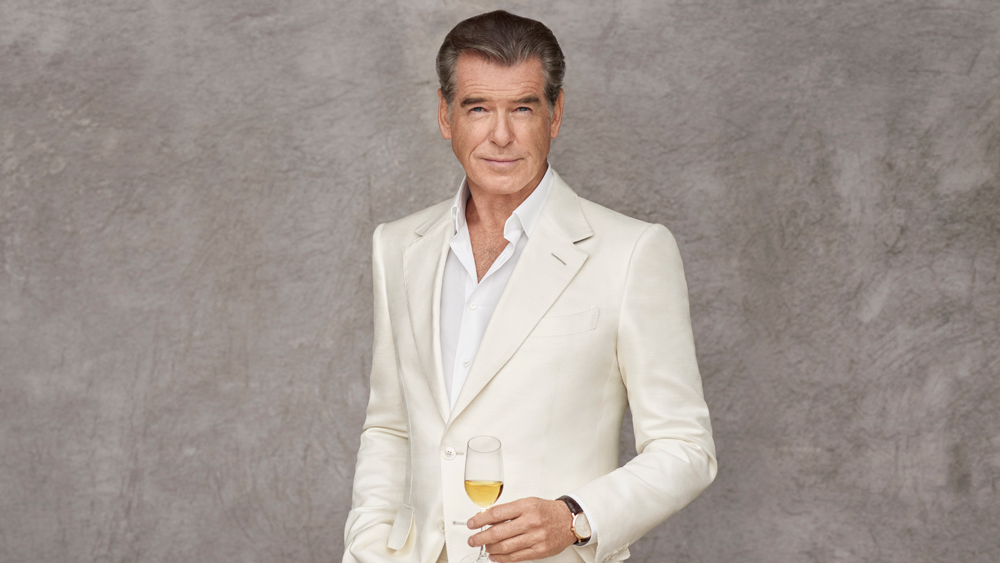 Years before he was James Bond, Pierce Brosnan was Remington Steele. So years before there were martinis in Brosnan’s life, there was tequila.

“Remington Steele took me to Mexico, and I remember drinking tequila there for the first time and remember the joy of doing that TV show,” Brosnan tells Robb Report. Around the time he starred in that 1980s dramedy about a pair of private eyes, the Irishman also appeared in a 1986 ad for Cuervo Gold, touting his “dashingly suave, yet disarmingly charming Margarita recipe.” An appreciation for agave set in.

More than three decades later, Brosnan has reacquainted himself with tequila as the global ambassador for Casa Don Ramón, which today announces three new, limited-edition expressions in Swarovski crystal-embellished bottles: Plata for $250, Añejo for $349 and an Extra Añejo for $399. The relationship between Brosnan and Don Ramón began about a year ago. “We met and they were very affable—we just got on well together,” Brosnan says. “I really liked the product. And they allowed me to produce and bring in a photographer and DP [director of photography] to create the commercial.”

On the eve of the announcement, Brosnan spoke with us from his home on Kauai’s North Shore, where he and his wife have spent most of Covid-19 quarantine. Right before lockdowns commenced, he finished filming Cinderella, and he’s currently in pre-production of The Last Rifleman, where he’ll play an 89-year-old WWII vet who escaped his nursing home in Northern Ireland to return to Normandy. “Hopefully in March or January of next year we’ll be able to start that movie,” he says. The former James Bond told us how he’s filling his days in the meantime, why he doesn’t make Martinis for himself and what effect he thinks Covid-19 will have on movies in the near future.

Is tequila your regular drink of choice?
I don’t drink it on a regular basis, but I do enjoy tequila. And this particular brand is very clean and very pure. I suppose when I think of tequila, I think of Remington Steele and of a movie I made called The Matador, and I think of sipping tequila with Greg Kinnear and hanging out with friends making that movie.

Any specific moments with Greg that stand out to you?
Having a shot of tequila at 10 o’clock in the morning with him because he was worried and complaining about his stomach. And I said, “tequila.” He said, “Oh, I can’t do that.” And I said, “Come on, just a shot of tequila—it won’t knock a feather out of you.” So, I do think that.

But of course, you know, in Mexico City you’d have lunch in the most elegant restaurants and men and women would be sitting there sipping their tequila. And that’s what this tequila is like. This is not one where you just want to belt it back and knock yourself out.

So what have you been drinking during quarantine?
Tequila! They sent me two cases of it, so we’ve been sharing with our friends in this little community of ours.

I was hoping you’d may say Martinis. I’m sure people buy them for you all the time before quarantine.
Yes. Yes, I’ve enjoyed many a martini, but I haven’t finished them all. I don’t need to make them for myself. I’m more of a red glass of wine with my meal.

How have you found ways to pass time during quarantine to stay sane?
Gardening. I have a brilliant wife, Keely Shay, and she is a remarkable woman and keeps me sane. She has created a beautiful coconut grove, a farm really, there’s over 300. So you harvest those and get the coconut water. She’s a wonderful cook and she made her own vegetable beds, and we’ve been cultivating those and enjoying the fruits of labors. So gardening is a big part of our week. I also go for a swim, work on golf, play tennis and give thanks. We’re very blessed to have this space.

And I have a studio, so I’ve been painting a lot and really getting into ceramics. There’s a company in Mexico that makes earthenware pots that I will paint into, and there’s a company in Belgium which we’re starting discussion in regards to putting tapestries into rugs. So the art side is finding some meat on the bone there. I was supposed to do an exhibit with Chuck Arnoldi’s studio in Venice in November, but Covid obviously put the kibosh on that. I was looking forward to working with Chuck, and we still will at some point.

Is the painting the creative itch you’ve really been scratching of late? Because you were a graphic artist before you were an actor, right?
I was, yes, well I was more of a tea boy. Watering the plants and drawing straight lines and having dreams of doing album covers. The painting part of it really started in 1987. It’s been a constant in my life. But now I’d like to make ceramics, I like to make rugs and create graphics. That’s always excited me, and I get far more joy out of looking at a book on Kandinsky, Monet, Chagall, the impressionists, than watching a bad movie.

Work in progress, a birthday present for Keely on the 25th of Sept. This one is in memory of our dear friend Jay Benidict.

You’d mentioned recently that you think great art will come from this and a new world order. What do you think the art will be in the aftermath of Covid-19?
It could be very dark. The art that came out of the Spanish Flu and eras of war have been very sharp. Brutal. But what we have now is this wonderful interaction through Zoom and how you show your art. So artists can have a constant rapport with people and reach a great audience and be inspired.

I think that self-reflection and isolation, that’s the hardest battle—dealing with that thump of anxiety you get from the news should you choose to indulge in it. How do you deal with that? People are meditating, people are coming back into themselves. You have to be at one with yourself and deal with your own mortality and deal with the passing of friends. I’ve had quite a few this year. Reflections on death and dying, it always lifts you up [laughs].

You know, the fun stuff.
You just have to face that one way or another and get on with your day and say: I’m going to write just a paragraph, I’m going to paint for just 20 minutes, meditate for 20 minutes, read some wonderful bit of literature.

I’m working on my memoirs. The memoirs don’t come easy in the sense that I’m lazy. I just sit there and my wife is like, “Write the memoirs!” And she’s right, so I’m working on that.

Any juicy bits you want to share from the memoirs?
Those would need to be off the record [laughs].

What do you think the mood of the country could mean for future Bond movies? Your version was of the ’90s and more camp and fun, Daniel Craig’s was a post-9/11 world and had a heaviness to it. Does Bond take on the mood of the society it’s released into?
Yes, yes. I strongly believe so, and there’s evidence of it throughout all the Bond movies. Somehow, they managed to be just a little ahead of time. Not always, but they do spend a considerable amount of time looking at the state of the world.

You know, for me, as soon as Paul Greengrass and Bourne came on the stage, that just shattered everything. The production of Bond had to change. But the work that Daniel has done has been outstanding. The Bond he has created is a testament to his powerful work as a man, as an actor and as a storyteller. I think the pendulum swings backwards and forwards. It could stay in the same dark vein or they can put a lighter spin on it, a lighter touch.

I came at a time when I was at the crosshairs between Roger and Sean and it was a magnificent 10 years. It’s just a great experience, one of those transformative experiences of life and a gift that keeps giving in many ways.

Now that you’ve had more distance from playing Bond, how do you look back at that time and the time after you retired the role?
Joyful. It was a big challenge in life and massive responsibility because one was brought up on the character and observed the significance of the man who played the character. It was hard work but a great joy.

Happy 90th birthday Sir Sean Connery … I was eleven years old in 1964, just off the plane from Ireland when I saw Goldfinger at the ABC Cinema on Putney High Street. You were my Bond of inspiration .