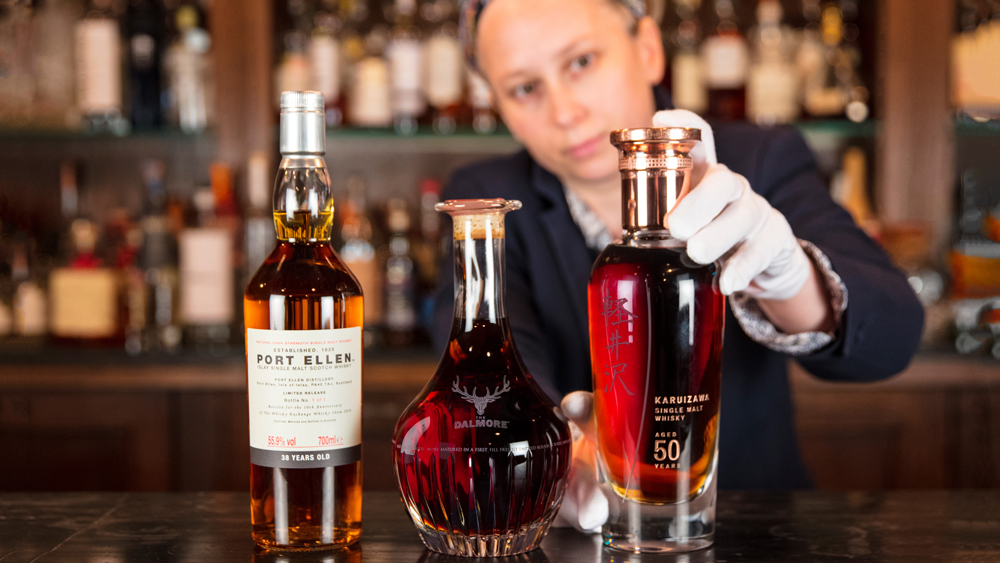 Photo: Courtesy of The Whisky Exchange

It’s not oceans of whisky, but rather the  Plastic Oceans Charity Auction that has us salivating at the coming week’s prospects. From November 18 to 27, on whisky.auction, the Whisky Exchange will sell some of the most impressive bottlings ever to come to auction, including many one-offs and limited editions. For connoisseurs of Japanese whisky, there is a highly prized bottle of Karuizawa 50 Year Old: Numbered one of two, this bottle from the closed Japanese distillery is estimated to go for around $255,600, which would set a new record for Japanese whisky.

Other exceptional bottles on the block include number one of one of a Balvenie 1973 Vintage Cask; an Ardbeg 37 Year Old, donated by LVMH and one of the only single bottlings Ardbeg has ever produced; and a Brora 35 Year Old, one of the few single-cask bottlings from the cult ghost distillery.

The bottles were all on display at the Whisky Show in October, and the November auction is expected to raise upwards of $250,000 for nonprofit organizations around the world that are dedicated to eliminating single-use plastic waste. Among these groups is Plastic Oceans International, which will use the donation it receives to raise global awareness; its goal is to reach a billion people by 2020 by making films and other content to educate the public and change policy.

The charity auction’s other exclusives include a magnum of Caroni rum from Trinidad—the oldest Caroni rum in existence that is still aging in cask. Such tropical aging means that there is a loss of 6 to 8 percent of the spirit each year, making the rum much rarer and more mature than a Scotch whisky of the same age. Also of note: an O.F.C. 1990 bourbon, donated by Sazerac, that matured in a barrel for nearly 30 years at what is now the Buffalo Trace Distillery and is one of only 63 bottles.

“Every now and then an auction lineup comes along that has spirits collectors and connoisseurs on the edge of their seats; this is one of those auctions,” says Isabel Graham-Yooll, auction director for Whisky.Auction and an expert on authenticating rare whiskies. “These bottles are not merely rare, some of them are entirely unique; they have never been seen before and may never be seen again.”