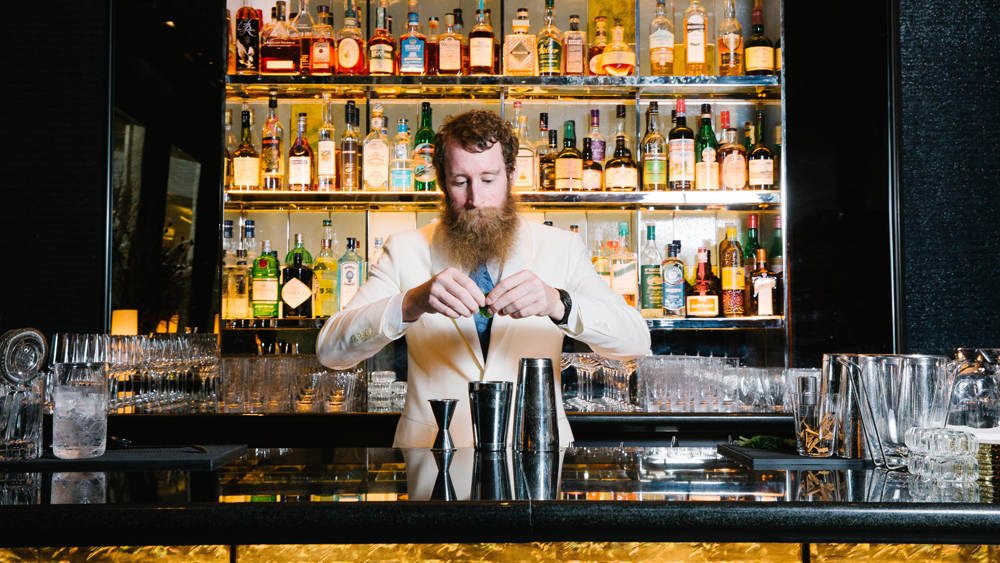 The fabled Four Seasons restaurant in New York, which closed in 2016, was known more for its food than its cocktails. But Major Food Group, which took over the space and reopened it this year as The Grill and The Pool, has made the bars every bit as exciting as the restaurants. That’s thanks in part to head bartender and director of bar operations Thomas Waugh, who helms the beverage programs at both restaurants. Waugh is also the mastermind behind the drinks programs at the Lobster Club, Carbone, and the Michelin-starred ZZ’s Clam Bar, to name a few.

The newest jewel in Waugh’s crown is the Pool Lounge, and that’s where you’ll find him pouring his creations most nights. Overlooking the restaurant, the quiet, spacious room—whose renovation has been the subject of some controversy—has tables spaced pleasingly apart so that even if every seat is spoken for, it doesn’t feel crowded.

Comfortable as the room is, Waugh’s clever libations are the reason to spend an evening there. The cocktails (all $18) are named after their dominant flavor, a practice Waugh began at ZZ’s Clam Bar. He riffs on drinks ranging from the classic to the cringeworthy; the Sour Apple, a take on the much-maligned (and deservedly so) Appletini, is a refreshing mix of cold-pressed Granny Smith apple juice, Calvados, rye, Thai basil, and lemon juice that’s simultaneously easy to sip but quite complex. The Jalapeño, a dirty martini variation, replaces the gin or vodka and olive brine with jalapeño-infused tequila and switches the vermouth out for sherry and Cocchi Americano. It’s then served along with muddled cucumber to tame the (quite fiery) heat.

Two of Waugh’s most interesting cocktails contain absinthe. The Cucumber is essentially a daiquiri with cucumber-infused absinthe in place of rum and is served in a coupe lined with thinly shaved cucumber slices. The minty herbal notes of the absinthe, which tend to dominate in other mixed drinks, are reduced to a whisper, giving the cucumber and lime room to strut. The Tomato reinvents the Bloody Mary, with a dash of cucumber-infused absinthe paired with tomato-infused vodka, tequila, elderflower liqueur, lemon juice, and muddled tomato. It’s light where the Bloody Mary is heavy, slightly sweet rather than salty, and simply garnished with three cherry tomatoes.

The food by Rich Torrisi, the Pool’s chef, is noteworthy in its own right and pairs well with the cocktails. The most eye-catching dish contains ribbons of foie gras ($32), plated to resemble a flower blossom and accompanied by dehydrated orange chips. There’s also a decadent caviar service ($45 and up) with all the works.

A table at the Pool Lounge is an ideal way to spend an evening, but it’s also worth bellying up to the bar to watch Waugh at work. Witnessing him craft his creations is almost as much fun as drinking them.