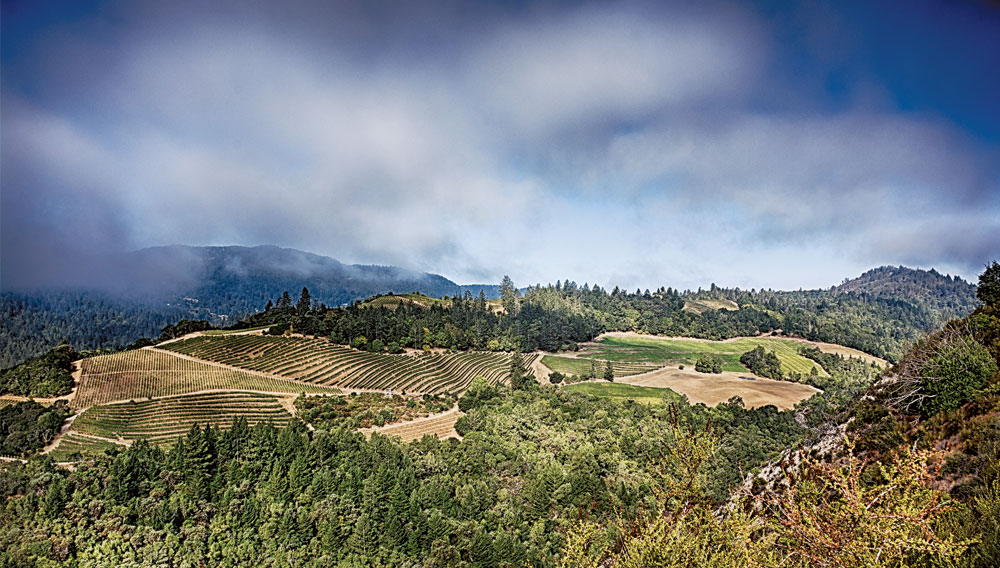 The mountainous Promontory estate is accessed by a former carriage road that once connected Napa to Sonoma.

Time may have virtually forgotten the densely forested acreage that forms a bowl-like valley in the mountains above Oakville, Calif., but Bill Harlan did not. This enclave, situated between Napa Valley’s Oakville and Yountville AVAs, supported a small mining concern in the 19th century and, during Prohibition, an illicit still; after that, no one showed much interest in the property until the founder of Harlan Estate (and later, Bond Estates) first saw it more than 25 years ago. From that moment, he envisioned planting vineyards there. “It’s different here than elsewhere in the valley,” he says. “When you have a vineyard in the hills, it picks up more character from what’s above the ground than most people think. They think of terroir as the weather and the soils. But there’s a whole other facet that has to do with the character you get in the wine from what’s above the soil, and the influence of the forest and woods have a lot to do with that.”

Harlan registered the name Promontory in 2006 with these 840 acres in mind, but the land did not become available until 2008. Although some vineyards had been cultivated by a previous owner, Harlan and his team—which includes Bob Levy, director of winegrowing and partner; Mary Maher, vineyard manager; Cory Empting, winemaker; and Micah Flynn, ranch manager—immediately began clearing and replanting its steep, rugged slopes to his exacting standards. Currently, the Promontory estate contains 70 acres of vineyards with another 30 acres planned. Five additional acres of vines surround the winery, now under construction, on a hill above Oakville Grade. This Howard Backen–designed complex has magnificent vistas of the valley and something that neither Harlan Estate nor Bond offers: a hospitality center. “It’s a window to the world,” says Harlan. “Still by appointment, but it will give us closer communication with our patrons. With Harlan and Bond, that was a different era. Nowadays, members of the younger generation want to discover things on their own. They want to be close to the source.”

This spring, as Promontory releases its first vintage of Cabernet Sauvignon–based red wine—2009—the future is very much on Harlan’s mind. His son, Will, and daughter, Amanda, have both entered the family business, and Promontory will be their legacy as much as it is their father’s. “Harlan was conceived on a first-growth model, while Bond is more of a Burgundy model with Bordeaux varietals,” he says. “Here, we’re breaking away from the past. We’re applying everything we’ve learned in the last 35 years. It’s about the next generation; it’s about the 21st century; and it’s about California really coming into its own.”