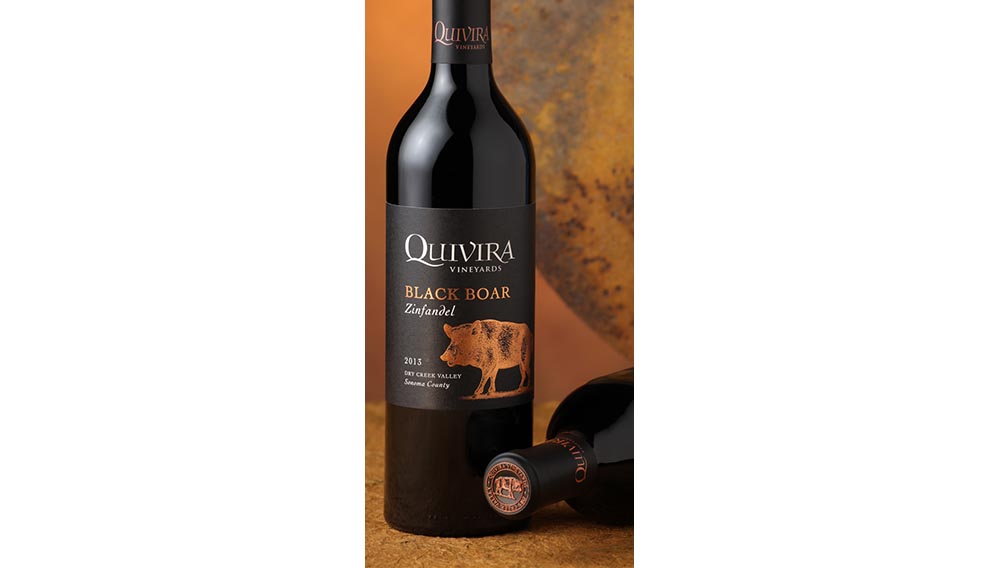 Winemaking is a meticulous craft, but Quivira winemaker Hugh Chappelle and vineyard manager Ned Horton have taken their practices to new heights of precision in making Quivira’s new Black Boar Zinfandel. Scheduled for release in September, the Quivira 2013 Black Boar Zinfandel from California’s Dry Creek Valley shows a bold signature of richness, concentration and balance that reflect extraordinary levels of meticulous farming and detailed winemaking by the Quivira team. The approach includes treating each vine as its own microclimate and using more than two dozen blending lots to make the wine.

“It’s certainly been a learning process, but over the last few years, Ned and I have really come to understand each of our estate blocks and I think the payoff is the Black Boar,” said Chappelle. “This is very much an expressive Zinfandel – expressive of what the Quivira terroir is all about.”

The Black Boar Zinfandel, named for the intrepid wild boars that roam the vineyards and woods of Dry Creek Valley, has been three years in the making, as Chappelle and Horton combed the estate vineyards to identify the ideal blocks, rows and vines for a bold new Zinfandel. Horton took the concept of microclimates to a new level by identifying them not just by region or even vineyard, but by individual vine. From pruning and positioning of shoots to leaf removal and cluster thinning, this vine-by-vine approach was designed to achieve optimal balance in the fruit and the highest possible varietal expression. Close to 30% of the clusters were thinned to reduce yields, and harvest was stretched over a three-week period with phased picking and up to eight passes through the vineyards. With sugar levels ranging from 23 to 27 Brix, Quivira had precise control over alcohol and acidity, while adding a myriad of aromas and flavors.

The meticulous approach to making the Black Boar Zinfandel continued in the cellar. Chappelle borrowed a page from his Pinot Noir experience to do a cool-soak for the Zinfandel, in which he hung mesh bags of dry ice over the bins to cover the fruit with a protective layer of CO2. Relying on native yeasts, Chappelle also used co-fermentations whenever possible (with Petite Sirah and the Primitivo clone), a technique he favors for allowing different varieties to play off one another in greater harmony.

Although very labor-intensive, most lots were basket pressed for the gentlest handling of the fruit before racking to barrels. And true to form for the Black Boar Zinfandel, the barrel aging process was far from conventional. Cooperage included 60-gallon and 132-gallon French oak barrels as well as very unusual 600-gallon and 900-gallon French oak foudres. For barrel aging, Chappelle was also able to employ special 70-gallon barrels custom-developed over five years with a cooper to showcase the Quivira terroir.

There may be no better example of the precision that went in to making this wine than the number of lots used for the blend. Chappelle ended up using more than two dozen lots to make the 2013 Black Boar Zinfandel. To underscore this bold new wine, Quivira developed new packaging that depicts a striking, copper-embossed boar on a black background. The suggested retail price for the Quivira 2013 Black Boar Zinfandel is $45.

All of Quivira’s vineyards are certified Biodynamic and organic, as are the extensive produce gardens and fig trees on the property. Quivira was founded in 1981 and specializes in Zinfandel, Sauvignon Blanc and Rhone varieties. Quivira Vineyards is located at 4900 West Dry Creek Road, Healdsburg, CA 95448. The telephone is 707-431-8333.  Additional information is available at www.quivirawine.com.