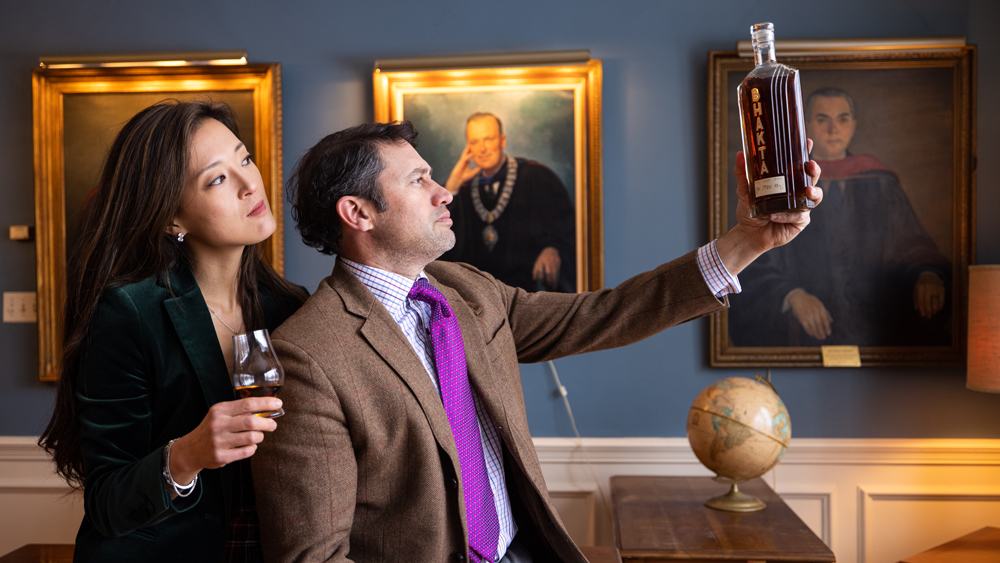 Raj Bhakta elbowed his way into whiskey history in 2010 with the launch of WhistlePig, the brand that spearheaded the rye revival of the last decade and inspired countless imitators with similar mash bills along the way. But the same outsized personality that got Bhakta a spot on an early season of The Apprentice and fueled an unsuccessful bid for Congress also led to years of legal disputes, during which he was nearly kicked off the board of directors of the company he’d founded. Bhakta retired from WhistlePig in 2017 and had sold his stake by 2019.

What to do for a follow-up? The answer presented itself when he was kicked out again—this time by his pregnant wife (he has four children) from the chalet in which they were staying in the Alps. Bhakta wouldn’t reveal exactly why he’d been temporarily ejected, but he hopped in his car and drove to the Armagnac region of France, where he says, “I happily found the oldest stash of spirits on the entire planet.” The spirit in question, naturally, was Armagnac—38 barrels of it, from Maison Ryst-Dupeyron, whose history with Armagnac dates to 1783. These barrels had been distilled between 1868 and 1970, and the family that owned the motherlode was considering selling it off. Bhakta was unable to maintain a poker face while negotiating. “My jaw dropped when I saw his stocks,” he says. “And there was no betraying my covetousness—after that point, everyone’s seen it, and there’s no walking it back. So he got paid top dollar, so good for him. But good for me, because relative to what it is, it was a fantastic deal.” Bhakta bought the chateau (which he renamed after himself) and the Armagnac, which he started selling in late 2020 as Bhakta Brandy.

Why “Brandy” and not “Armagnac”? Bhakta finishes the blends in casks that formerly held Islay whisky for two weeks, which calls into question whether it can legally be called Armagnac. “I could have pushed it through,” Bhakta says, “but I decided, look, if they don’t want to do it, then I won’t create another PR headache for myself. The purists are upset. But when you combine the smoke with the sweet, it’s exquisite, you know?” Based on the blend we’ve tried, exquisite hits the mark. It opens with a deep, rich fruitiness redolent of fig and tart pear; hints of smoke and salinity from the whisky casks make their presence felt mid-palate, complementing the other flavors without overwhelming them. The finish is dry and long, with a light oaky tingle that’s surprisingly gentle considering how long the liquid has interacted with the wood.

Before hitting the Armagnac jackpot, Bhakta had looked into starting up brands with other spirits, including whiskey and rum, but he realized Armagnac is one of the few categories that’s still relatively undiscovered by connoisseurs and collectors. “I think it’s an accident of history,” he says. “[Armagnac is] a rich region, and it was geographically isolated—it had no ports around it. And it didn’t have the mentality of going out and selling in the world, as it was for the people in Cognac, who were attached to the port city of Bordeaux.” The brandy itself is distinct from cognac. Where cognac is double-distilled in pot stills, Armagnac is distilled a single time in small column stills. The result tends to be a more intense, fruitier spirit that Bhakta says is “sort of what mezcal is to tequila. But imagine a mezcal that’s 150 years old.”

That’s no exaggeration. Even the youngest of these brandies is a half-century old (because age statements must correspond to the youngest spirit in the blend, the bottles sport 50-Year-Old labels), and the oldest was laid down three years after Lincoln was assassinated. How is Armagnac able to pull off such an extended slumber without totally evaporating or tasting like an oak stave? A unique combination of factors. Armagnac is aged in barrels twice as large as typical American whiskey barrels, so there’s less contact between spirit and wood. French oak is denser and less porous than American oak, so there’s less liquid moving in and out of the wood. The barrels had also been previously used, which means the wood had less tannin—the stuff that makes spirits taste “oaky.” A cool and dry aging cellar with relatively little temperature fluctuation also helped maintain these oldest of old vintages.

What makes this Armagnac even more improbable is that the oldest of it survived both world wars, among other conflicts, and emerged untouched and unscathed. Bhakta bets that even collectors who don’t know much about Armagnac will be taken in by its age. “You really are drinking history. What other spirit can you drink where you can actually taste a variety of vintages from the 19th century and the early 20th century? I think that I’m a history guy. [And] I feel like this is your ability to really taste and touch and feel history.”

Bhakta has already planted vineyards on his Vermont farm, with the first harvest planned for this year. Eventually, the brand will transition to a modern American brandy. But for now, he’s intent on making a splash with the old stuff. First released at a price point of $250 last year, the first five bottlings all sold out quickly. He’s already raised the suggested retail price to the $400, with the intention of getting to the $1,000 range by the time the last barrels are bottled (each barrel produces about 550 bottles of Armagnac).

In the meantime, he’s creating a unique stockholder program, in which investors literally get stock—two bottles of each Armagnac release, which will eventually total a 76-bottle haul. He was inspired by the success of WhistlePig’s annual limited edition “Boss Hog” releases, which currently go for many times their suggested retail price on the secondary market; Bhakta claims that the first Boss Hog release has sold for $13,000. “I did it with my friends and family in the beginning,” he recalls. “I looked at the Boss Hog appreciation and I said, why don’t I put together a bottle collection for them, and they actually become stockholders in the true sense of the word, which is they hold the inventory.”  One bottle is meant for drinking, and one is intended to hold on to. “And if you have bottles 1 to 38 in their storage crate with all the paperwork, and you have a complete collection, it should be worth a fortune. So it’s like equity upside, while at the same time being able to enjoy the product. You can’t drink stocks and get a nice warm glow from them.”

Bhakta is offering a small number of single-vintage bottlings, which won’t be available in stores, to select stockholders. His goal is to eventually find 125 stockholders. He’s also dangling the prospect of visits to the chateau in France and the farm in Vermont. As he puts it in the prospectus, “I want to build relationships with my accounts and Stockholders, so they know and share what an amazing product they possess. I also just like getting to know new and interesting people.”

Whether or not you want to hang out with the founder of the brand, individual bottles of Bhakta Brandy are currently available at select retailers; new blends will be rolling out periodically until all remaining barrels are exhausted.