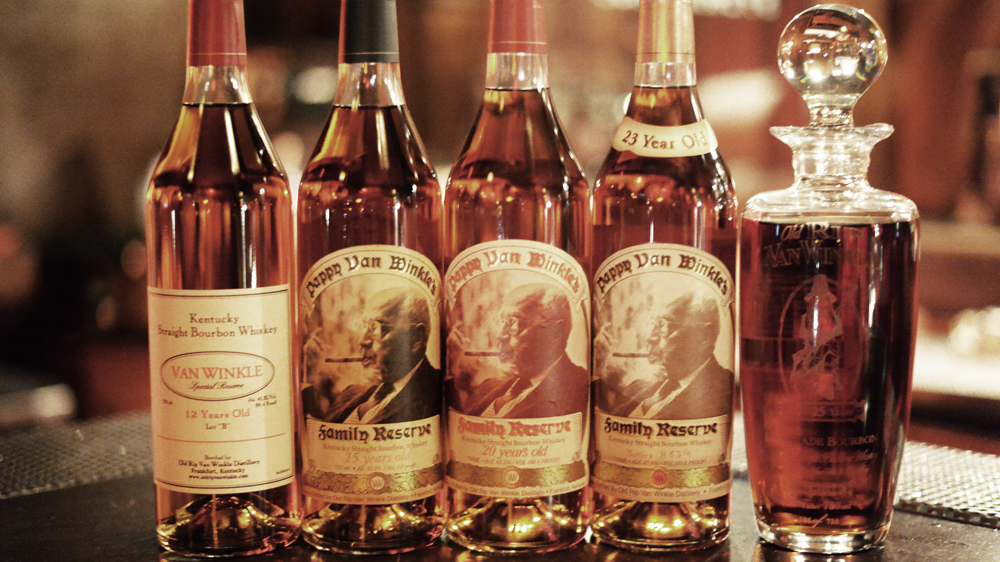 Pappy Van Winkle is famously one of the most expensive and difficult to find bourbons, with a cult-like fandom that is willing to pay exorbitant amounts for a bottle. For one company, that screams out “investment opportunity,” which will probably piss off the people wanting to actually drink the whiskey instead of build their portfolio around it.

Rally is an online platform that allows people to invest in fractions of sports memorabilia, classic cars and watches. Now it’s entered the world of high-rolling, collectible bourbon bottles (a rare Japanese whisky and vintage single malts from The Macallan have been traded on the platform before). Starting August 16, the company is selling 2,000 shares at $7 each for a six-bottle collection of Pappy Van Winkle: 23 Year, 20 Year, 15 Year, 12 Year, Old Rip Van Winkle 10 Year and 13 Year Rye. According to the Rally website, all assets are kept in a climate-controlled facility on the East Coast of the US, while wine is held at a bonded warehouse in the UK.

The company will create an initial offering on the Rally app, similar to an IPO, which will be priced at $14,000. When it’s fully bought out Rally holds onto the asset for 90 days, at which point the whiskey will be made available on the Rally secondary market. It’s also possible that at some point the whiskey will receive a full buyout offer, which would then be presented to the investors for approval. Of course, as with any investment, there’s a chance that the Pappy could decrease in value. This seems unlikely, but the return is dependent upon people actually wanting to purchase the whiskey via the Rally app.

It’s a sign that the world of bourbon is catching up to what what wine aficionados have enjoyed for some time, which is that their wine collections have outpaced equities markets in appreciation. However, instead of having to hunt the bottles down yourself to hold and flip, Rally is offering to let you buy shares in bottles they’ve secured already and then making the market.

This seems like a situation ripe for detractors, as there are plenty of whiskey fans busy hunting down unicorn bottles who are pretty fed up with the robust secondary market driving up prices (although to be fair, if you’re still trying to buy Pappy no price should surprise you). While Rally is really about investing in whiskey and trying to turn a profit instead of sipping bourbon, it could be seen as adding to Pappy’s already unobtainable status.

According to Rally CEO George Leimer, the only feedback he’s gotten so far has been from producers who want to get their bottles on the platform. “As far as whiskey enthusiasts reaching out supportively or in frustration, we haven’t gotten much of that,” he told Robb Report. “We’ve gotten a couple of thousand investors in wine and spirits so far, but we haven’t heard that feedback.” He also said that this is just the start, as Rally plans on adding more whiskey assets in the future. “The wine and spirits offerings have been very popular, and whiskey specifically has been popular. We listen to the user base, and when they ask us to search out opportunities in more categories we listen to them. This won’t be the last whiskey you see on Rally.”