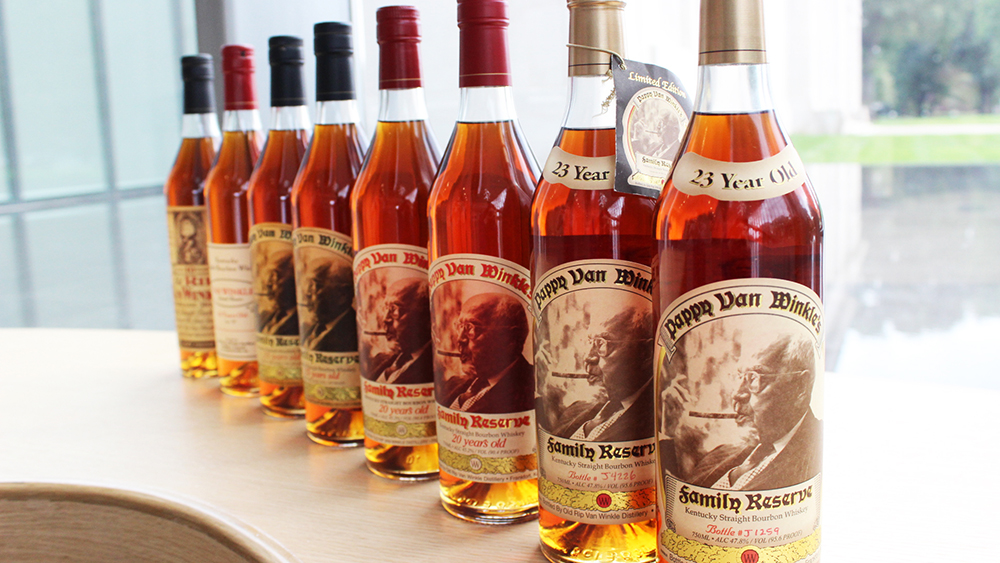 With Pappy Van Winkle bourbon in such short supply, and allocations to even the most high-end stores so small, it’s a bourbon obsessive’s fantasy to be able to buy five bottles of Pappy at once. Which is why collectors and connoisseurs seeking a taste of whiskey history will be sure to check out the second annual Art of Bourbon auction, an event benefitting Louisville’s Speed Art Museum, on September 19. The cream of Kentucky’s distilleries have donated astoundingly rare bottles and even barrels, both old and new, 54 lots in all—including a five-bottle lot of the white whale of bourbons. The Pappies are aged from 10 to 23 years and signed by distillery president Julian Van Winkle, who donated the lot as well as three other bottles, which will be sold individually. The five-bottle lot is expected to fetch $10,000 to 15,000.

For fans of vintage spirits, the most sought-after find may be a bottle of T.W. Samuels Bottled-in-Bond bourbon dating back to 1942. If the name isn’t familiar, that’s because the name was changed in 1959—to Maker’s Mark. Pre-Maker’s Samuels bottles are almost unheard of on the secondary market. Legend has it that Bill Samuels, Sr., the father of Maker’s Mark founder Bill Samuels, Jr., burned the original T.W. Samuels family recipe, making the liquid as unique as the label.  The single bottle is expected to sell between $10,000 and 15,000.

If you’ve ever wanted to own a bottle of pre-Prohibition whiskey, now’s your chance. A bottle of the famed cache of Old Overholt rye (made in Kentucky today but Pennsylvania back then), distilled between 1908-11 and discovered in 2014 by a descendant of then-owner Andrew Mellon, is back on the block and expected to fetch as much as $15,000. It’s a classic and rare example of the Pennsylvania rye that completely disappeared in the decades after Prohibition. Another vintage spirit, a pint of bottled-in-bond “medicinal” bourbon, so called to get around Prohibition laws, distilled at the James E. Pepper distillery in 1916 and bottled in 1928, is also being offered and expected to net $5,000.

Whiskeys of more recent provenance include a W.L. Weller Centennial 10-Year-Old wheated bourbon from the late 1990s, distilled at the now-defunct Stitzel-Weller distillery (expected to fetch $2-5,000) and a bottle of Old Forester’s legendary 2008 Birthday Bourbon ($2,500).

For a chance to create your own bourbon legacy, a lucky winner and nine friends will travel to the Maker’s Mark distillery in Loretto, Ky., and work with chief distillery officer Rob Samuels to create a unique, personalized barrel of Maker’s Mark. The barrel will be accompanied by a glass artwork from the Samuels’ collection created by the iconic Dale Chihuly. The expected price? A mere $20-25,000.  Not bad when you consider a barrel can hold around 200 bottles’ worth of whiskey.

The event itself is sold out, but online bidding is open through the end of the auction on Thursday, September 19.