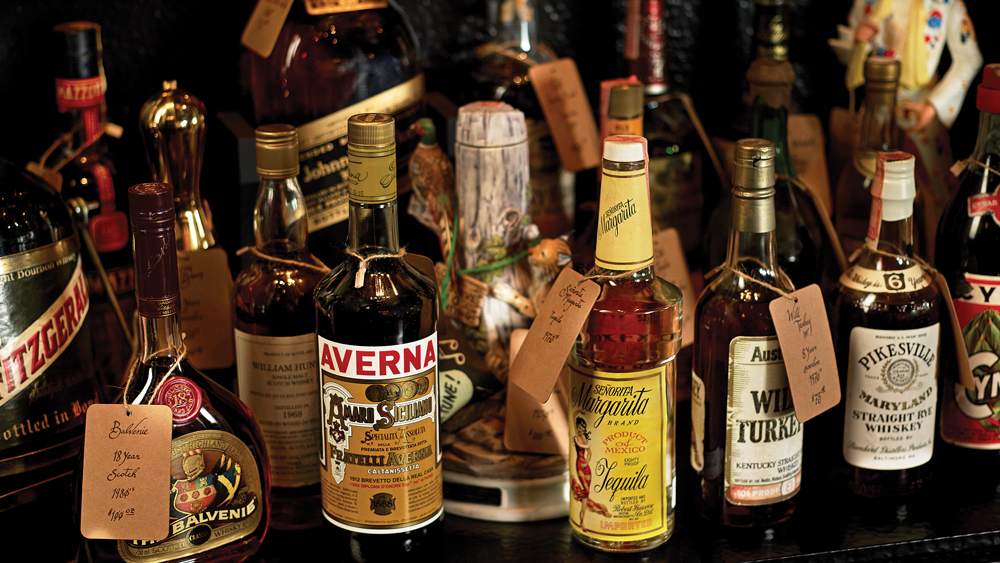 Whiskies are entering the echelon of collectible artwork and garnering higher prices than ever both at auction and online—and their ascent shows no signs of slowing. Long-discontinued and pre-Prohibition spirits continue to be the best investments, as demand for these bottles far exceeds supply, while rare-cask purchases are beginning to gain momentum. In January 2014, a faceted, handblown Lalique crystal decanter containing 6 liters of Macallan M—
a vatting of seven exquisite sherry-barreled whiskies personally selected by the Macallan’s master blender, Bob Dalgarno—set a world record at Sotheby’s Hong Kong as the most expensive whisky ever sold at auction. The catalogue estimate called for the lot to fetch between $258,000 and $516,000, but when the hammer finally fell, the bid stood at $628,000. When it was introduced in 2013, a 750 mL bottle of Macallan M carried a suggested retail price of $4,500. The same quantity, as part of the 6-liter decanter, effectively sold for more than $157,000.

Anyone who follows spirit auctions at such houses as Sotheby’s, Christie’s, and Zachys recognizes that rare spirits—specifically Scottish and Japanese single malts and American bourbons—have achieved a degree of collectibility that rivals that of some of the finest artwork. This development may explain why, this past fall at Hong Kong’s Fine Art Asia 2017 exhibition, a number of vintage single malts were on display and for sale, including a 45 Year Old 1972 Ben Nevis and a 53 Year Old 1964 Glenfiddich.

“The secondary market for rare whisky has never been so strong, outperforming many other well-established asset classes, including wine and gold,” says David Robertson, cofounder of Rare Whisky 101, a whisky brokerage and consulting service based in Scotland. “As an asset class, it has outperformed many of the world’s leading share indices and commodity prices. However, as with most other passion investments, we tend to see investors looking at rare whisky as one part of a balanced portfolio as opposed to a choice between traditional and alternative stocks. The vast majority of investors share a love for rare whisky, which, when combined with strong investment credentials, make it a powerful proposition.”

Robertson also notes that because whisky is distilled, unlike wine, it does not run the risk of ruin once it is in the bottle—another factor that reinforces collectors’ perception of this category as a secure investment. Demand among connoisseurs, he adds, is on the rise—particularly in the secondary market, where consumers turn to acquire whiskies that are no longer available from distillery stocks. He identifies three buyer types in search of rare whisky—collectors, investors, and connoisseurs—all of whom contribute to the escalating demand for an ever-smaller number of surviving bottles.

Typically, this category has been driven by scarce single-​malt scotch, but almost all superpremium “brown spirits”—such as bourbon, rye, and Cognac—are candidates for investment. “We’re seeing an increase in the superpremium and high-end premium price categories across nearly every spirit,” says Frank Coleman, senior vice president of the Distilled Spirits Council. “This reflects the upward trend of adult consumers’ interest in luxury spirit products. As spirits fit nicely into the trend of consumer interest in brands with authentic, interesting backstories, we’re seeing adult millennials drive this growth.”

This interest in rare spirits has burgeoned not only in Asia and the United States but in the United Kingdom as well. “We are continuing to see a huge interest in Japanese and American whiskies right now,” says Richard Ellis, former spirits buyer at Hedonism, a London retailer that specializes in rare whiskies. “Prices have risen sharply . . . as availability has dwindled and as their respective audiences increase. This looks set to continue as demand continues to outstrip supply.”

This pattern certainly applies to cult American bourbons, such as Pappy Van Winkle 23 Year Old, which is released every fall and quickly sells out—often for well above its suggested retail price of $250. In fact, bottles of Pappy 23 often bring three or more times that amount in secondary markets.

This cask of 1987 Macallan set a record in October at auction  Photo: Courtesy John Paul Photography

“American whiskeys are starting to pick up tremendously, especially in the UK,” says Mahesh Patel, a prominent collector who has not only amassed a personal cache of almost 5,000 bottles of rare whiskies valued at an estimated $6 million but also created Whisky Concierge to help others acquire rare bottles. “But Pappy has caused what I call a ‘Macallan syndrome,’ in which they stir up the market and people tend to drive up prices on the secondary market—not from the retailers, but in private sales.”

The Past Is the Future

Buyers seeking significant returns must choose their acquisitions carefully. Patel views pre-Prohibition spirits as good investments; however, he notes that the downside to these finds from the collector’s point of view is the lack of reliable documentation for spirits that were illegal at the time they were distilled. Whiskies must have provenance, after all, to be worthy investments.

“Provenance is key for us and is always at the forefront of every purchase we make,” says Ellis. “We will try and trace the bottles that we purchase back to their original source and often speak to distilleries directly, especially for the really old bottles. To that end, we have carbon-dating information for a couple of bottles.”

Although aged current releases present few pitfalls in terms of authentication, Rare Whisky 101’s Robertson points out that purchasing these bottles at their retail prices may not yield maximum appreciation, at least in the short to medium term. “The current market is all about the desirability of long-discontinued rarities,” he says. “Many of these have now acquired almost legendary status among collectors and connoisseurs—Bowmore Bouquet, Macallan’s 1960s and 1970s 18-year-olds, Laphroaig 10-year-old from the 1970s and earlier, to name just a few. These are now highly sought after, exhibiting a different style of flavor than many contemporary releases. In real terms, the scarcity of collector pieces is increasing; the heavily fought-for gems are becoming rarer. Take the 52-year-old Macallan 1946: There were 13 bottles sold at auction in the UK in 2015, an equal 13 bottles sold in 2016, and despite a general increase in supply of 47.25 percent through 2017, we have only seen five bottles hit the open market so far this year.”

Bottles are not the only vessels that have attracted investors’ attention; both individuals and groups of inventors are purchasing casks of whiskies—much like buying futures on the stock market—in the hope that the values of the aging spirits will increase as the whiskies reach maturity. But distilleries, many of which are now buying back their own aging stocks of spirits to replace inventory, are not always eager to sell their whiskies to private individuals, especially while the spirit is still in wood. More money can be made, after all, once the liquid is bottled.

To address this growing interest, Rare Whisky 101 has launched a bespoke-cask brokerage service to source and acquire, on behalf of their clients, barrels, hogsheads, and butts from such brands such as Ardbeg, Laphroaig, Macallan, Highland Park, Rosebank, and Springbank. The firm focuses on aged rare whiskies that may be stored and possibly forgotten in Scotland’s many bonded warehouses rather than on newly made ones, which will require decades to mature. In general, prices for these trophies range from $1,850 to $370,000 a cask at auction. Just last month, another cask brokerage firm, Cask 88, consulted on Hong Kong’s Spink auction-house sale of a cask of 1987 Macallan for a record-breaking $374,839.

The Last Drop Distillers, founded by whisky executives James Espey and Tom Jago, has been very successful in sourcing and bottling long-lost barrels of Cognacs and blended scotch. The company pairs each 750 mL bottle with a 50 mL miniature that enables purchasers to sample the whisky while preserving the integrity of the full-size bottle. The latest offering is a 1971 scotch that was blended in 1983 and introduced as a Premium 12 Year Old; after being rebarreled in sherry butts and American oak and aged 9 more years, the now 45-year-old whisky fills just 1,352 bottles, each priced at $3,999.

“We believe that the market for older casks of high-quality liquid from top-tier distilleries will continue to go from strength to strength,” says Robertson. “Given the booming global demand for rare whisky, these owners could be sitting on a very tidy profit.” He warns, though: “There is most definitely a finite time in which to sell a cask. We recently saw a 50-year-old cask that had dropped below the legal minimum of 40 percent alcohol to 28 percent and was subsequently deemed worthless.” (Scotch, it should be noted, must be a minimum of 80 proof to be legally designated as a whisky; the longer the spirit remains in barrel, the lower its proof becomes as the alcohol evaporates.) He cautions that casks can also leak or become overly woody, so owners should have their casks checked annually.

Investing in casks, admittedly, is not for everyone, as acquisition, storage, and regular inspections are responsibilities that many investors do not wish to assume, even with a brokerage as the go-between. It is far more convenient to invest in bottles, assuming they have provenance and are stored properly.

“When it comes to conditions, we look for many similar things to wine,” says Jeff Zacharia, president of Zachys Wine Auctions. “The labels should be clean, there should be a high level of spirit in the bottle, and there should be no seepage. The original packaging is also hugely important. It’s important in wine, but it’s essential to maintaining value with rare bottlings of scotch. Just like wine, what collectors really want is rarity, and this is where Zachys excels—whether it’s Laberdolive Armagnac from the ’50s, ’60s, and ’70s or A.H. Hirsch 16 and a 20-year-old Hirsch from 1974, a bourbon that puts the rarity of Pappy Van Winkle to shame. All of these are performing at or above their high estimates at auction. The bottles we accept for auction are from a specific cask, vintage-​dated, or there are just very few of them out there.”

Japanese whiskies—and specifically single malts—are also appearing more frequently at auctions and in other secondary markets. These spirits’ ability to garner awards at international competitions has added to their appeal as potential investments. Still, buyers should exercise caution.

“We love some of the rare Japanese whiskies currently in circulation,” says Robertson. “Often these bottles are produced in limited numbers, which has a tendency to increase their desirability. In fact, many of the releases that are most highly sought after at auction are Japanese, with Karuizawa, Hanyu, and Yamazaki all performing well on the secondary market. However, the investment fundamentals remain similar to those of scotch. Discontinued old and rare releases from silent stills remain most highly sought after.”

Of course, predicting the extent to which any spirit will appreciate is difficult, no matter how limited its production may be or how many years it has spent in the barrel. But as Patel and Zacharia both observe, buying top-rated brands with bottle provenance is important. On the subject of timing, Zacharia is adamant. “Get in now!” he says. “I think Japanese whiskies are going to keep rising in value in the short term, and rare bourbon always does well—although it has to be really rare, not just Pappy Van Winkle rare. The most important thing in spirits, as in wine, is to taste widely, train your palate, and keep on top of the auction schedule—especially the online auctions. . . . Lastly, there’s no crystal ball. You should collect spirits because you enjoy them.”