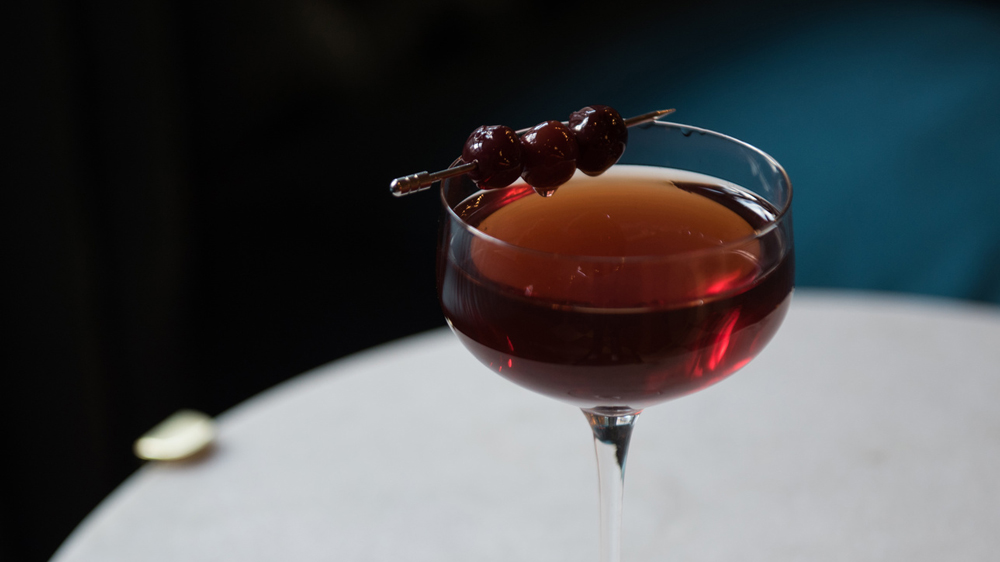 Watching your local mixologist stir lactic acid tincture into a banana-infused Negroni, you wouldn’t necessarily think that bartending is all about tradition, but it is.

I suppose there’s an argument that all professions look to the past, but tending bar feels unique. Aside from maybe urban horseback riding or the production of top hats, there aren’t many trades that reached their Golden Age before electric light. Cocktails are bigger now than they’ve ever been, but with very few technological exceptions, most of what we’ve been doing for the last couple decades is excavating the 19th century. That’s what all the twirly mustaches and suspenders were about, at least in the beginning. It wasn’t pretentiousness (or rather, it wasn’t only pretentiousness). It was about respect.

You can see this in ways big and small, but my favorite example is in Manhattan variations. First, there was the Manhattan, rye whiskey, vermouth and bitters, invented somewhere around the 1880. Historians divide on whether it got its name because it epitomized the rugged refinement of the island or simply because it was created at the Manhattan Club at 15th and 5th, but either way, it was celebrated from its inception as the namesake cocktail of the biggest and most important city in the Western world.

Spun off that came another cocktail, named for another borough, the Bronx. It had vermouth, just like the Manhattan, but with gin this time, and the curious addition of orange juice (the reason you’ve never had one, by the way, is that it’s not good). Not to be forgotten, the Brooklyn joins the party a couple years later—rye whiskey again, vermouth again, punched up with a couple dashes of Amer Picon and Maraschino liqueur. And so it was: You make a variation on a Manhattan, and you name it after the borough or neighborhood by which it was inspired. This was true of the Queens cocktail in 1930, and it was true of the Vieux Carré, which is what they called the French Quarter in New Orleans when Walter Bergeron invented it there in 1938.

This tradition, like everything else in the cocktail world, evaporated in the 50 years that followed. The drinking culture never fully recovered from Prohibition and utterly disappeared in the ’70s and ’80s, bludgeoned nearly to death with sweet & sour mix and peach schnapps, a time when drinks like the Alabama Slammer, the Fuzzy Navel and a shot just called “Blowjob” occupied the space where cocktails used to be. Then in the 1990s a handful of bartenders in New York, looking to the distant past, started doing subversive stuff like using fresh juice. Those few converted a few more, and they in turn more still, and on New Year’s Eve in 1999, Sasha Petraske opened Milk & Honey, which wasn’t a bar so much as a portal to the previous century.

It was at Milk & Honey in 2003 where bartender Vincenzo Errico invented an excellent rye whiskey cocktail, mixed with an Italian bittersweet vermouth called Punt e Mes, and a touch of Maraschino Liqueur. It felt Manhattan-like, but the Maraschino really made it a more direct descendent of the Brooklyn Cocktail, which was invented not far from that very spot some 95 years earlier. Errico could’ve named it anything he wanted—it was his drink, after all—but recalling the traditions of his forbearers, he named it the Red Hook after a neighborhood in Brooklyn.

The latter half of that decade would see the Bushwick, the Green Point, the Bensonhurst, the Carroll Gardens, and many more. Back in Manhattan, there was the Little Italy. In Boston, there was the Fort Point. All neighborhoods, all Manhattans. It’s a heartening little bit of culture resurrected, paying homage to the past, and reminds me of the difference between ritual and tradition: A ritual is anything you do over and over, but to be a tradition—from the latin traditio, meaning “to hand down”—it has to be passed down from one generation and picked up by the next.

Stir on ice for 15 seconds (if small ice) to 30 seconds (if large ice). Strain off ice into chilled coupe glass. Garnish with a cocktail cherry or nothing at all.

Rye Whiskey: This is very much a rye cocktail, and specifically is where punchy 100 proof Kentucky-style ryes really shine. I’m not sure you can do much better than Rittenhouse Rye or Wild Turkey 101 Rye here. You can go a little higher proof if you have a mind to—Pikesville comes to mind, or Willett Rye, or Wild Turkey Rare Breed Rye, but these things start getting expensive in a hurry. What you’re looking for is some corn in the mashbill for body and at least 50 percent alcohol—even at a quarter ounce of liqueur, you need the whiskey’s proof to fight the sweetness.

Sweet Vermouth: Punt e Mes means “point and a half” in Piedmontese dialect, and it refers to the bitter edge of the product—a point of vermouth and a half point of bitter. It’s broodier than normal sweet vermouth, all bitter chocolate and coffee and cherries, and makes the addition of cocktail bitters superfluous. It’s worth picking some up—with it and Benedictine you can make a Fort Point, and it makes a profound Manhattan when mixed with George Dickel Rye. That being said, if you don’t have a bottle, normal sweet vermouth works fine, just give it a dash or two of Angostura and/or Orange Bitters.

Maraschino Liqueur: this deserves its own whole article and will get one someday, but suffice to say Maraschino is a liqueur made from the distillate of the marasca cherry, a sour variety which grows around the slopes of the Adriatic Sea. Unlike almost every other liqueur in the world, it is distilled from cherries, not infused with them, and so won’t taste as much like cherries as it does the earthy funk of an unaged brandy. The easiest one to find, Luxardo, is excellent and wholly recommended.