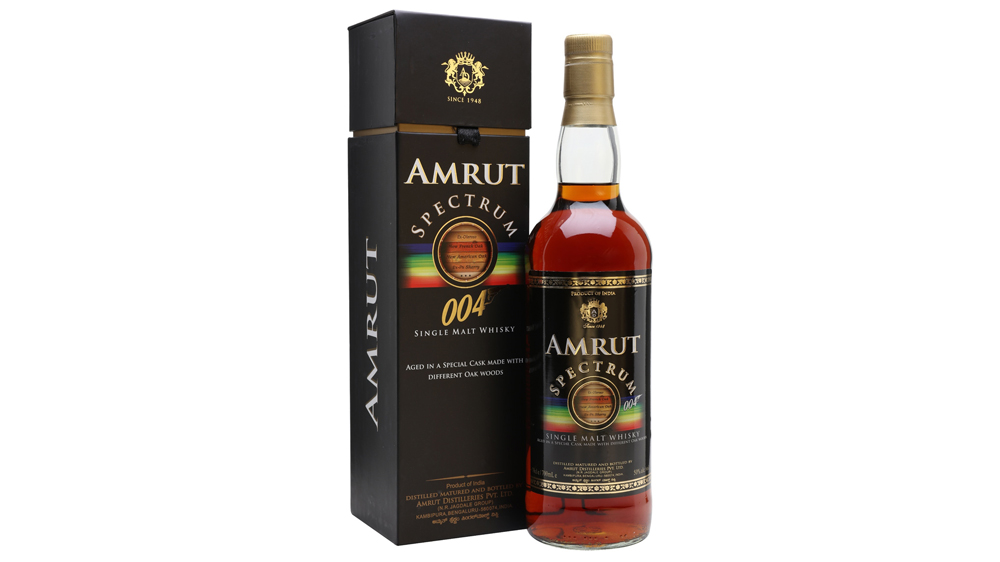 It’s starting to feel like every new whiskey release is getting the cask finish treatment these days. For those who are unfamiliar, this means putting the whiskey in another barrel for a brief (or sometimes lengthy) secondary maturation period. Distilleries are using rum, sherry, wine, tequila, mezcal, beer and vermouth barrels to finish nearly every type of whiskey from every country. And sure, many of these are quite good, although some are perhaps attempts to smear boozy lipstick on a whiskey pig. But what if you wanted to finish your whiskey in a bunch of different kinds of barrels? Why not take it one step further and just build barrels using staves collected from a few different kinds of casks and age your whiskey in that to see what happens? India’s Amrut Distilleries did just that with its new single malt Spectrum 004, and the results are impressive.

For this second 004 release, the whisky (India spells it without the “e”) was initially matured in ex-bourbon casks, and then finished in barrels that were custom built from a combination of staves of four different types: new American oak (char level 3), new French oak (lightly toasted), ex-Oloroso sherry butt, and ex-PX sherry butt. The concept here is that the whiskey is able to pick up the flavors and characteristics associated with all of these different types of casks simultaneously, and the staves were used in equal proportions so that one note does not dominate. Each type of wood is supposed to bring something different to the palate, from the spice of the virgin oak to the deep dried fruit and raisin notes of the PX sherry-seasoned wood.

The color is a rich, deep, syrupy reddish-brown and the nose initially erupts with a bouquet of sherry cask notes of fig and cherry syrup. The palate then opens with a tingling spice on the tip of your tongue, which fades into a melange of orange, vanilla custard, raspberry jam, and some tannic oak flavors that almost approach menthol. The finish is hot and sweet, with a nice warming sensation that takes a few seconds to dissipate. The whisky is bottled at 50 percent ABV, and while initially I was hoping this would be bottled at cask strength, this proof works well here.

Amrut has been around since 1948, but the single malts have really only been available around the world for a decade or so, and comprise a relatively small portion of the company’s products and sales (rum, brandy, vodka and blends make up its core portfolio). But the Amrut single malt whiskies have been critical favorites over the years, and a taste of this new whisky proves why. The climate in India is obviously much hotter than in Scotland, which is probably the closest comparison point for this style of whisky. The Amrut master blender once estimated that one year of aging in India might be equal to three years in Scotland, so these are generally going to be younger whiskies, but I challenge you to pinpoint that in terms of flavor.

Ultimately, the custom-built barrels used to finish this single malt could be seen as a selling point or gimmick. To truly see the difference, one would have to try this in comparison with a whisky that has gone through a traditional finish in separate barrels. Regardless, there is nothing that feels inauthentic about the flavor of this whisky. Spectrum 004 is a limited release, with just 6,000 bottles, 1,050 of which are available in the US. So if you happen upon one and are willing to pay up to twice its $195 asking price, you won’t be disappointed.