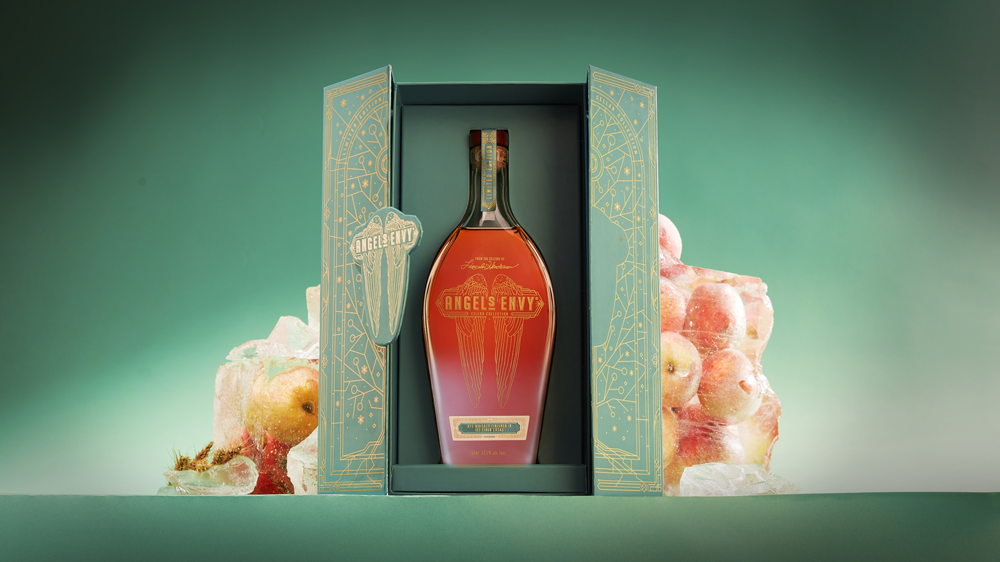 It’s the end of an era for Kentucky distillery Angel’s Envy, as co-founder and chief innovation officer Wes Henderson recently announced his retirement. He started the brand with his father, the late master distiller Lincoln Henderson, 13 years ago, and four of his sons now hold important roles in the company. So it’s fitting that one of the last releases that Henderson has been involved with is this innovative and intriguing new rye whiskey finished in ice cider casks, the first cask-finished rye from Angel’s Envy since 2013. According to Wes’ son Kyle, his brother Andrew was the one who found the barrels and really pushed for this new cask finish.

Those who are familiar with Angel’s Envy know that cask finishing is the raison d’être for the distillery. The core lineup of contract distilled bourbon (whiskey produced on site is still maturing) is finished in port barrels after about six years of initial maturation. The rye whiskey that is part of that lineup is finished in rum casks, so you should expect something very different from this new limited release. The vital stats are as follows: this is a 95 percent rye whiskey that was aged in new charred oak for seven years and then finished in ice cider casks for an additional 364 days. It’s the fourth release in the Angel’s Envy Cellar Collection, and the barrels used are from Vermont’s Eden Specialty Ciders. Ice cider is kind of like ice wine, a sweet, dessert-style cider made from “​​late-season Northern Spy apples” that is made by fermenting the juice extracted after freezing, concentrating the sugars in the process. The barrels are made from French oak.

This is a lovely rye whiskey, and the spice that you’ll typically find from such high rye content is tempered a bit by the cask finishing. The nose has notes of caramel sauce and brown sugar, while the palate begins with familiar notes of black pepper and allspice, and then develops into cranberry sauce, prunes, butter pecan and caramel apple. The finish has a slight tinge of heat that fades into a pleasant warmth in the back of your throat. At 107 proof, the whiskey is a bit on the hot side, but the soft sweetness complements the alcohol.

The whiskey is limited to just 6,000 bottles, each made from frosted glass that comes in a gift box. This, like other limited edition Angel’s Envy releases, will likely prove to be very popular and sell beyond its $250 price tag. It seems that I’m writing about cask finished whiskey more and more, as this technique (or trend, depending on your view) seems to have become the dominant one in the world of American whiskey. And sometimes it’s a cover for inherent flaws. But there’s no doubt that this is another winning whiskey from Angel’s Envy, and a fitting bookmark to Wes Henderson’s legacy.