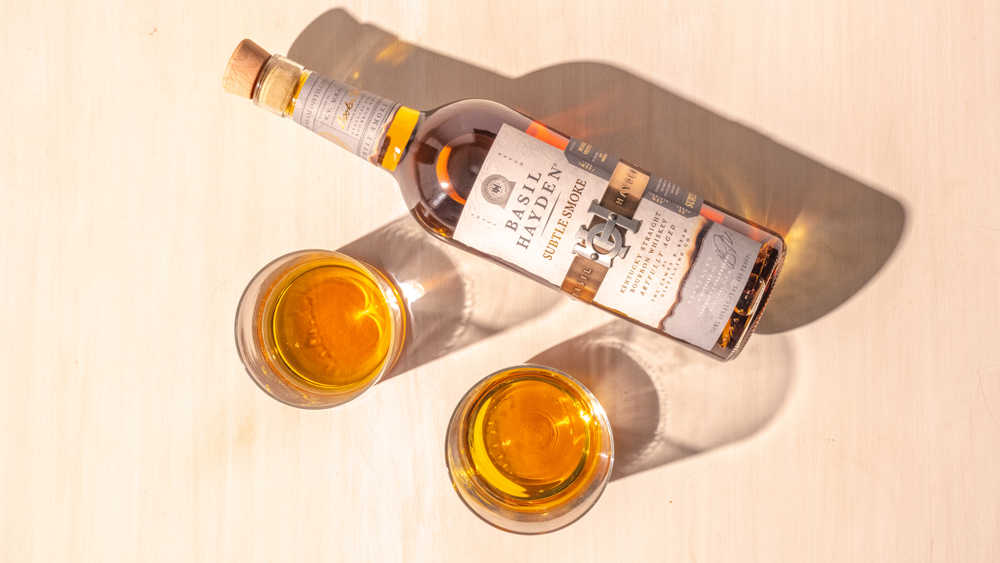 Bourbon drinkers always have the same beef with Basil Hayden, a whiskey brand that’s part of the Jim Beam Small Batch Collection—the proof is just too low. At 40 percent ABV, the minimum required to be called whiskey, it’s just not strong enough for many experienced drinkers. And this is not because they want to get blitzed (although some surely do), this is because 80-proof whiskey just doesn’t have the same flavor, mouthfeel and overall complexity on the palate that higher proof whiskey has. This makes sense, because the lower the proof, the more water has been added. All that being said, diehard bourbon fans should absolutely consider giving the new Basil Hayden Subtle Smoke a try.

This release is brand-new, and I haven’t actually done a search on Twitter, but I’m going to make a prediction as to what the initial reaction might be. Bourbonerds are going to complain that Beam is going overboard with yet another “experimental” Basil Hayden release like Dark Rye or Caribbean Reserve, trying things that no one is going to like in order to augment one of the lesser brands in the portfolio. And, it should be noted, many of these comments will be made before actually trying the whiskey. Well, I sampled this bourbon with an open mind, and to my surprise it is an interesting and unusual whiskey that strikes a nice balance between the classic BH flavor profile and a whiff of savory smoke.

Here’s how the distillery made this happen. Freddie Noe, the eighth generation Beam distiller who is also responsible for Little Book, was the force behind this new release. And if you know anything about him, and more importantly have been able to sample his work, you know that he’s passionate about pushing the envelope at the distillery. Instead of smoking the grain, as would be done when making a peated scotch for example, this high-rye bourbon was finished in a toasted and lightly charred barrel for six months. And here’s the kicker—the barrel was filled with smoke produced by igniting hickory-smoked wood chips, so the actual aged whiskey was smoked instead of the grain.

Sure, this sounds kind of gimmicky, but the results are immediately evident when you sip this intriguing bourbon. There are notes of leather and chocolate on the nose, along with a bit of smoke you might smell on your clothes the morning after sitting around a campfire. On the palate, there’s a dollop of savory barbecue sauce, some cherry, orange and cinnamon, and all of this is underscored by, true the name, subtle smoke.

To be clear, this isn’t the first smoky bourbon, but it’s hard to find another example of a smoked bourbon. Wild Turkey’s Longbranch comes close, but it was filtered through mesquite charcoal, not actually smoked. Kings County has a peated bourbon, and there are several American single malts that are made with smoked barley, including Colkegan which uses mesquite smoke. And yes, I still wish that Basil Hayden Subtle Smoke was bottled at around 90 proof, but that just isn’t gonna happen with this brand. Still, I highly recommend coming to this bourbon with an open mind, and try using it in some cocktails to switch things up. The smoke might be subtle, but the bourbon itself makes its presence known.

Every week Jonah Flicker tastes the most buzzworthy and interesting whiskeys in the world. Check back each Friday for his latest whiskey review.