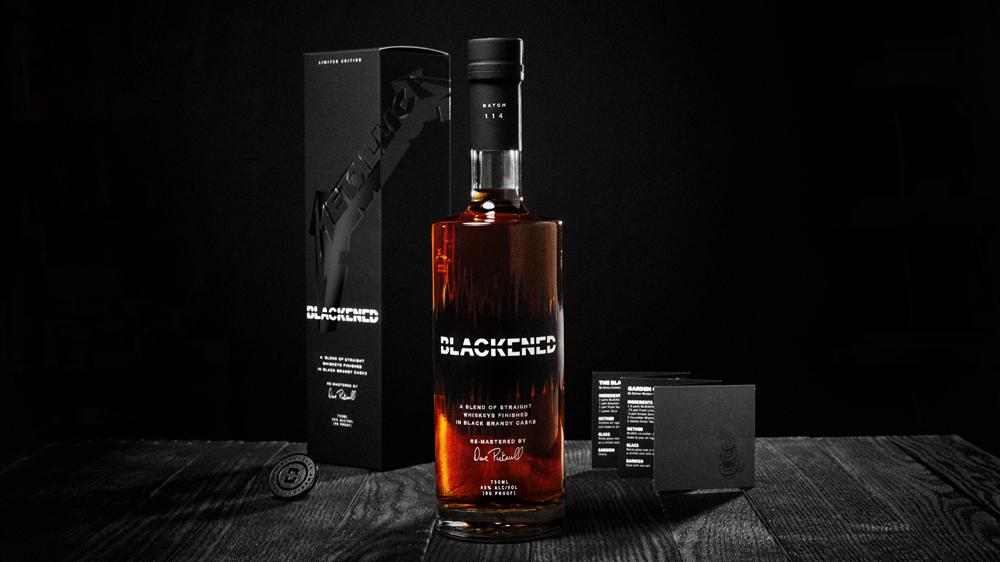 Over the years, there have been a few notable rock band-backed whiskey brands, like The Pogues Irish Whiskey, Slipknot No. 9 Iowa Whiskey, Gwar’s Ragnarök Rye and the tequila barrel-finished collaboration between FEW and Alice in Chains called All Secrets Known. One of the most high profile examples in this world is Blackened, a brandy barrel-finished American whiskey produced by Sweet Amber Distilling Company, a collaboration between the late master distiller Dave Pickerell and Metallica that was created in 2018. In 2019, former Stranahan’s master distiller Rob Dietrich came from Colorado to join Blackened and is now responsible for sourcing casks, blending and managing the finishing process.

As with any celeb-backed spirit, it’s reasonable to wonder how much input the band actually had into the makeup of the whiskey, but in this case it’s all about the music. Blackened is a blend of sourced bourbon and rye aged for about eight years that has been “finished in black brandy casks to the low hertz frequencies of Metallica’s music through the BLACK NOISE™ sonic-enhancement process,” according to the brand. Essentially what this means is the whiskey is dumped into charred Spanish brandy barrels that are blasted with Metallica’s chugging power chords and quickfire drum riffs to vibrate the liquid and increase interaction between the wood and whiskey, thereby picking up more flavor and color. Would the whiskey’s character be altered if the finishing process took place in a silent room, or perhaps while being serenaded by the finest ‘80s Billy Joel ballads? Of course, but it seems that the goal here is to fast-track the whiskey-wood relationship via heavy metal sonic vibrations, as opposed to the tried and true method of time + patience + temperature fluctuations.

If you view this technique with the same dubious eye you might cast upon things like ocean aging, unusual mash bills or sticking custom-cooked staves inside of a barrel, so be it. The bottom line is whether it really affects the flavor of the whiskey. After all, that’s what it’s all about, regardless of which famous entity has a stake in a brand or what special process was used to deliver an extra boost of flavor. If the whiskey doesn’t taste good, it’s not worth drinking.

In the case of Blackened, the whiskey has a unique character which likely will please some and put off others. The nose brings forth a whiff of spice and orange zest, both of which are amplified upon taking a sip. The brandy cask-finish has had a big impact on this whiskey, bringing strong but appealing notes of pear, apricot, cinnamon and nutmeg along for the ride, and the 90 proof strength of the liquid does leave some lingering heat in your mouth. This might not be the whiskey you want to pour every time you are in the mood for a drink, but it’s a nice addition to your home bar nonetheless and would make for some interesting cocktails.

The latest batch (114) is now available as part of The Black Album Whiskey Pack, which comes with a bottle of Blackened specifically pummeled with the entire tracklist of Metallica’s megahit The Black Album, a collectable whiskey coin and the Snakebyte Cocktail Booklet which includes recipes from bartenders around the country and is named after James Hetfield’s Signature ESP Snakebyte Guitar. Who knows, the “BLACK NOISE™ sonic-enhancement process” may someday reach the pantheon of rock and roll legends along with Ozzy biting the head off a bat. But even if that’s not the case, whiskey fans looking for something a little different should give this bottle a try.