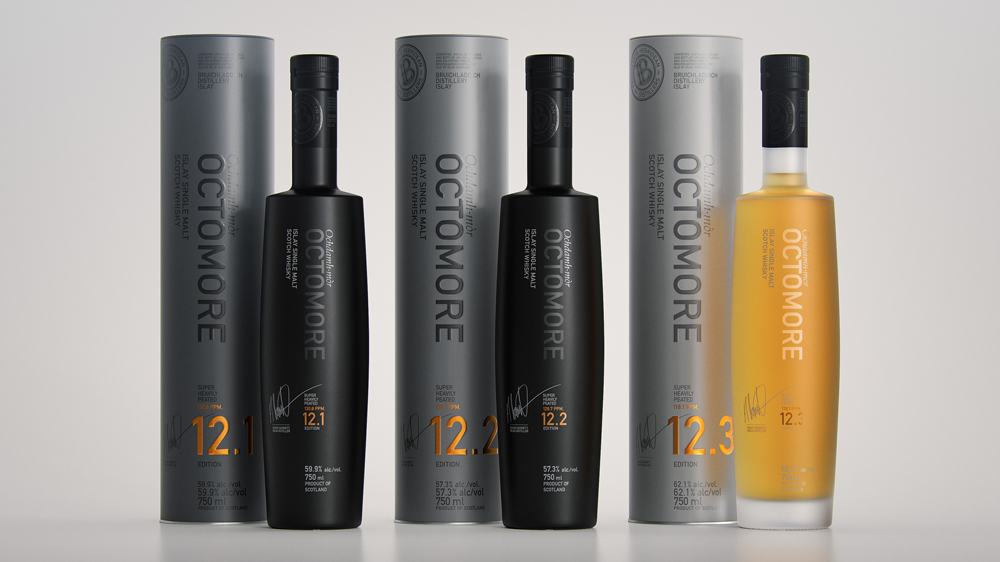 Bruichladdich is carefully dancing between two seemingly opposing concepts. On the one hand, there’s the strong assertion that terroir has an effect upon whisky; on the other, the distillery makes some of the most heavily peated single malts you can find. This is arguably a balancing act because if, indeed, the terroir of barley and soil can differentiate whisky even after undergoing distillation, imparting a lot of smoke could overwhelm any nuance of field, season and even the cask types used to mature the liquid. But so far, this Islay distillery has been doing a bang-up job of pushing this philosophy and going heavy on the peat, particularly in the annual Octomore range. Edition 12 is the latest release, a trio of indelibly smoky whiskies that still maintain subtlety and nuance of flavor.

Of course, not all of the whisky made at Bruichladdich, despite its fuggy reputation, is smoky. In fact, the core expression, The Classic Laddie, is entirely unpeated and a fine example of a light, fruity whisky. But the Port Charlotte range, and particularly Octomore, are liquid campfires that have as many champions as they do detractors—after all, smoky whisky can be very divisive. The new series consists of whisky aged for five years, half the time of most single malts and a statement of confidence in the quality of this relatively young liquid. And all three have a PPM (parts per million) above 100 which is, you guessed it, very, super, intensely smoky. For comparison’s sake, Ardbeg is about 50 PPM, and that is considered to be a well peated malt. Octomore is, like all Bruichladdich whisky, non-chill-filtered and no color is added.

The general concepts of the whiskies, according to the distillery, are as follows: 12.1 is the base or control whisky, 12.2 changes up the maturation and 12.3 is a study in terroir. 12.1 is the smokiest of the bunch—with a PPM of 130.8—and was matured entirely in first-fill ex-bourbon barrels. Despite its deep peat character, this is a lovely whisky that goes far beyond the smoke with notes of vanilla, citrus and some butterscotch pudding that intermingle beneath the smoggy palate. All of these whiskies are bottled at cask strength, and this one clocks in at 59.9 percent ABV. 12.2 first makes its presence known with its slightly darker amber-reddish color, due to the fact that it spent the last 18 months of its maturation period in Sauternes wine casks after 3.5 years in first-and second-fill bourbon barrels. The PPM goes down slightly to 129.7, and the ABV follows suit to 57.3 percent This finishing period has had a deep impact on the whisky, layering the palate with cherry syrup, dried mandarin and ripe fig flavors. There’s just a hint of tropical fruit sweetness here as well, and overall this, too, is a lovely whisky.

Finally, 12.3 reduces the PPM even further to 118.1, but amps the ABV back up to 62.1 percent. This is an utterly unique single malt, made from barley grown from one field on James Brown’s Octomore Farm, someone the distillery has had a longstanding relationship with. This whisky underwent a double maturation—75 percent of the liquid in ex-bourbon barrels and 25 percent in Pedro Ximinez sherry casks, both for five years, before being married together. The sherry influence—though it is the smallest part of the equation—is immediately evident here, with warm spice and fruit notes that slightly dominate the citrus and vanilla from the bourbon barrels. We’re not talking anything close to Macallan levels here, of course, but just a nice pop of flavor on the palate.

Head distiller Adam Hannett and his team at Bruichladdich have done an excellent job with the new Octomore 12 series of whiskies. Yes, you absolutely, definitely have to like smoky scotch to really enjoy these bottles, but each one really has its own unrestrained character and delivers a welcome balance of flavors that don’t just fall back on tire fire and iodine. If you can try them side by side, all the better for you, but any of these would be a welcome addition to your collection.