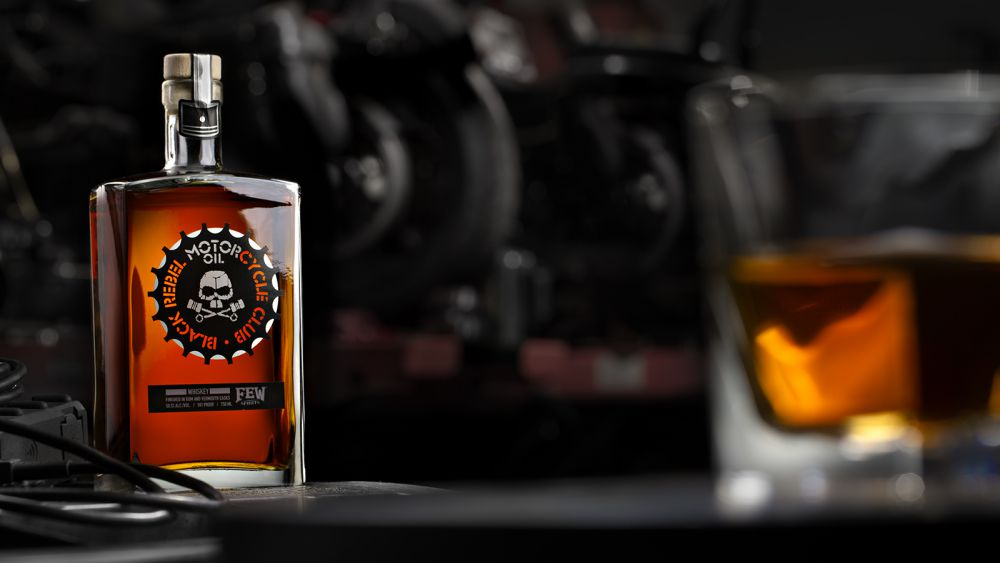 FEW Spirits has collaborated with a rock band for the third time on a new whiskey release, and this whiskey is worth checking out even if you’re not a rabid fan—of the distillery or the band.

This is not to say that Black Rebel Motorcycle Club (remember them?) is a band to just dismiss. Personally, they never resonated with me when their debut album came out over two decades ago in 2001, but it was quite the opposite for many others and the band developed a dedicated following. Revisiting the B.R.M.C. album now, the music hits deeper, bringing up memories of the melange of garage, post-punk and psychedelia that permeated the sounds of so many bands of that era. But apparently FEW Spirits founder and master distiller Paul Hletko was and is a devoted fan, so he worked with the band to create this whiskey called Motor Oil to celebrate 21 years since the release of their debut album.

“We’d always joke around about how someday we should make our own whiskey called ‘Motor Oil’ that’s so painful nobody would be able to actually drink it,” said bass player Robert Levon Been in a press release. “It would basically be jet fuel in a bottle, just pure pain. But then we met Paul Hletko and he said, ‘Yeah that’s cool, but that’s illegal’. So after brooding for a bit, Paul took the next year to properly school us in how it’s really done, dialing in what somehow eventually became a legitimate incredible whiskey blend, which is crazy, and we’re still mostly surprised we didn’t blow up the barn.”

The blend is the most interesting part here (sorry, BRMC, even more interesting than the music). FEW is a well-known craft distillery located in Evanston, Illinois that makes different styles of whiskey, gin and some other spirits, and has been getting better and better over the years. The distillery is now part of the Heaven Hill family of brands, after the Kentucky distillery acquired FEW parent company Samson & Surrey earlier this year. Motor Oil Whiskey is a blend of three liquids: bourbon finished in rum barrels, bourbon finished in vermouth barrels and mesquite-smoked wheat whiskey. It’s bottled at 101 proof, and that heat comes through. The whiskey is a dark, syrupy orangish copper color, with apricot and peach notes, along with some freshly cut wood, starting things out on the nose. The tasting notes have “vegetal” listed among other flavors, and you can definitely pick that up. Chocolate, orange, plum and a bit of tannic cheek pinch lead the palate, but the whiskey is full of sweet and savory spices, and that bit of mesquite smoke swirling around the middle and back of your mouth ties it all together.

Motor Oil Whiskey is weirdly good but definitely not an everyday sipper, which is just fine because we have plenty of those. It’s also the third release tied in with a rock band from FEW—in 2016 The Flaming Lips partnered with the distillery on Brainville Rye Whiskey, and in 2019 there was the limited-edition Alice in Chains bourbon called All Secrets Known. The bottom line is that if a distillery is going to collaborate with a band, or any celebrity for that matter, the product better be a good one or else it just feels like empty marketing. Fortunately, Motor Oil is a whiskey worth trying whether or not you a fan of Black Rebel Motorcycle Club. And who knows, try sipping while streaming the band’s music and you might just be converted.