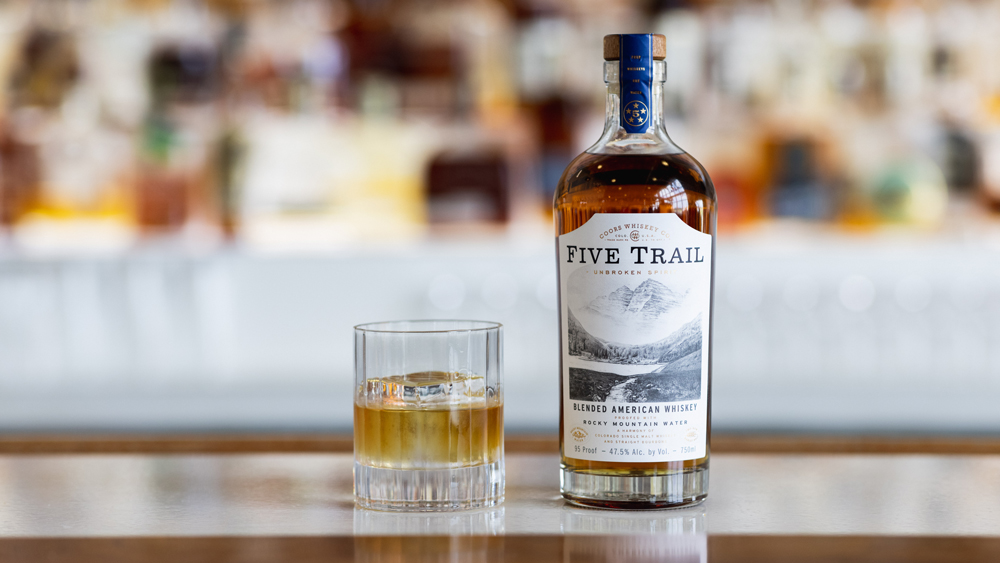 The whiskey-beer connection has been prominent in the craft world for some time now, with small breweries making their own spirits and similarly minded distilleries producing whiskey from stout, pale ale, porter and other types of beer. After all, whiskey is distilled from wash, also sometimes called distiller’s beer, which is the combination of grains, water and yeast that has been fermented to create low levels of alcohol. In recent years some major players in the beer world have gotten in on the action too. Steven Busch has his Walker’s Cay bourbon brand, there is a Pabst Blue Ribbon Whiskey and now Molson Coors has entered the field with a blended whiskey called Five Trail.

No, this isn’t a whiskey made from running a batch of the Silver Bullet through a still, as intriguing or horrifying as that might sound. Staying true to the old Coors mantra of “tapping the Rockies,” the whiskey is a blend that contains a Colorado single malt which is married with three other whiskeys and cut to proof using water from the Rocky Mountains. The makeup is as follows: 15 percent four-year-old single malt from Colorado, 35 percent four-year-old four-grain Kentucky bourbon, 45 percent four-year-old wheated bourbon from Indiana and five percent 13-year-old Kentucky bourbon. David Coors is the visionary behind this whiskey and he tasted over 100 samples before recruiting the folks at Bardstown Bourbon Company to blend and produce Five Trails.

I was a bit surprised at how much I enjoyed this whiskey. The color is a light amber-gold, and the nose is sweet and full of vanilla and honey. I was expecting a very light flavor profile, but there’s actually a good deal of complexity in the liquid. The honey and vanilla notes carry over onto the palate, but there’s also a nice amount of spice, some malted chocolate and fruit flavors like cherry and orange. While the older bourbon makes up a very small percentage of the blend, it seems to have been a necessary component to balance out what might have otherwise registered as a slightly immature whiskey. Regardless, the results are sweet but not cloying and very drinkable, especially at 95 proof (80 would have probably made this unremarkable).

Priced at $60, Five Trails might be a bit too expensive to attract curious consumers, especially those who are more comfortable with cheap American beer than premium whiskey. Still, the quality is quite good, the blend is thoughtful and measured and I would definitely suggest trying this in a cocktail.