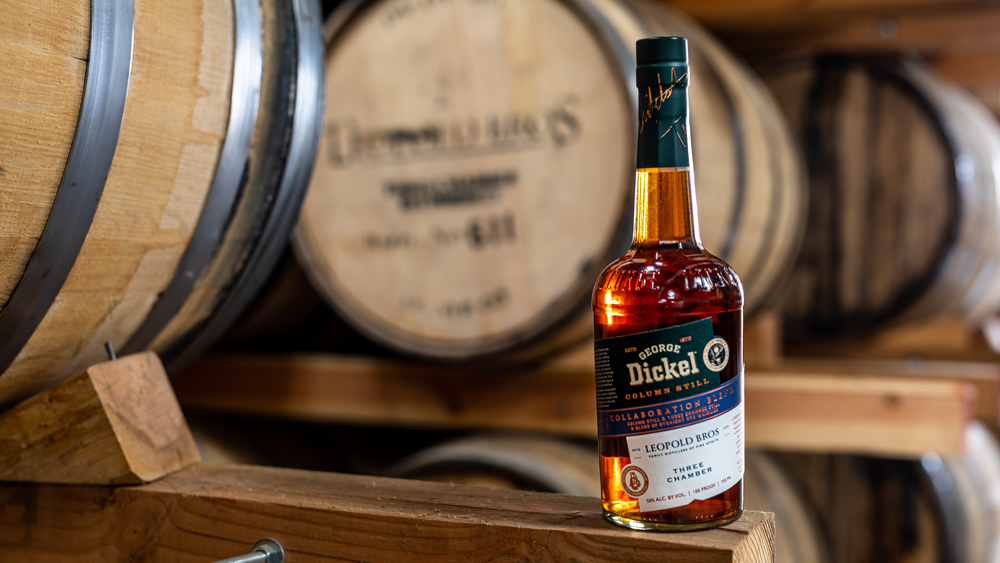 You don’t see a whole lot of collaboration between craft distilleries and ones owned by giant corporations. It’s not like the big dogs are scared of the little pugs—if anything, they tend to be inspired by their sense of experimentation and innovation, which is a good thing and leads to more interesting bottles being released. But actual collaboration, not so much. So perhaps if you have someone in a leading role at a large distillery with professional experience and relationships in the craft world, there is a more open mentality. In the case of George Dickel Tennessee Whisky, that person is Nicole Austin, and her particular whiskey experience might help explain this new release, George Dickel x Leopold Bros Collaboration Blend.

Austin is the GM and distiller for Dickel who went from chemical engineering degree, to working for Brooklyn’s Kings County Distillery, to Tullamore in Ireland, before landing her current job in 2018 at Cascade Hollow Distilling Co. The distillery is owned by Diageo, one of the world’s largest drinks companies, which makes this new rye whiskey partnership seem even more unlikely. But apparently Austin and Leopold founder/master distiller Todd Leopold have been friends and peers for a while now, setting the stage for this team-up.

George Dickel x Leopold Bros Collaboration Blend is exactly what it sounds like—a blend of rye whiskeys made at both distilleries. But the details are where things really get interesting. First of all, this is the first rye whiskey actually distilled at Cascade Hollow to be commercially released. Up until now, it has all been sourced from MGP in Indiana—and presumably that won’t be changing any time soon for the core rye expression. I remember visiting Dickel a few years ago and Austin mentioning that they were distilling rye at the distillery in Tennessee as well, but this was certainly not the way I thought it would be introduced. While there is no age statement on the bottle, the Dickel rye was distilled in column stills.

The second component is Three Chamber Rye from Colorado’s Leopold Bros. Distillery. Without getting too technical, the spirit is distilled in a still with three chambers, a style that was popular pre-WWII and produced what Leopold calls a “heavy-bodied spirit.” The distillery recreated this still and uses Abruzzi rye, a heritage grain that was more prevalent before Prohibition. The release of this whiskey is very limited and bottles generally will sell for at least $300 at most retailers. I have not had the chance to try this one on its own, nor have I tried the Dickel house-distilled rye by itself, but the two blended together is quite good, and very different from the regular Dickel Rye.

The whiskey is bottled at 100 proof, and there’s a touch of heat on the nose along with some anise, black pepper and vanilla. The palate falls somewhere between the assertiveness of a 95 percent rye and the Kentucky style (usually somewhere between 51 and 60 percent rye in the mash bill). All the baking spices are present, from cinnamon to nutmeg to white pepper, along with a nice amount of citrus (orange in particular), dark chocolate, caramel and a hint of menthol on the finish. This is a tasty rye whiskey indeed, and despite its relatively high price tag would work swimmingly in a Manhattan or other whiskey cocktail.

I would love to see a standalone release of the in-house distilled Dickel rye sometime in the future. And I guess it’s safe to say, considering the words “Inaugural Release” emblazoned prominently on the bottle, there will be more collaborations like this somewhere down the road. Austin and her team have proven their creativity and willingness to experiment over the past few years, and that has really helped to revitalize what was once kind of an overlooked and uninspiring brand. It’s not that every release is the absolute best whiskey you’ve ever tried (although most are quite good). But the bottled-in-bond, bourbon and Cascade Moon expressions that have arrived in recent years have reinvigorated this Tennessee whiskey stalwart, and this new rye whiskey collab continues that winning streak.