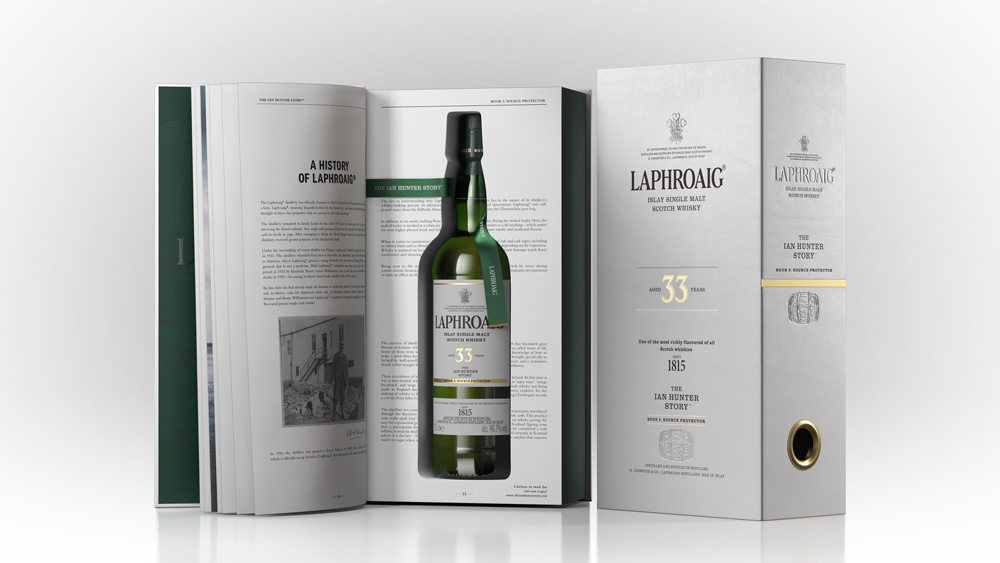 A lot of new single malt releases these days seem to have one thing in common: They undergo a barrel finish of some sort, a secondary maturation period in a cask that formerly held wine or sherry or some other spirit. It’s not like this is just a gimmick, though; on the contrary, it’s a tried and true practice that exists not just in scotch but also American, Irish and other categories of whiskey. This is all well and good, but sometimes the best ultra-aged releases are the most basic ones—just a few decades spent inside bourbon barrels, no cuvee or cognac or French wine finish. Such is the case with Book 3 in Laphroaig’s Ian Hunter Series. The whisky, the third of five releases that will ultimately comprise this collection, was aged for 33 years in ex-bourbon barrels, which is the key component of this Islay distillery’s maturation process.

If you’re familiar with Laphroaig—and most whisky drinkers are—you are well aware that the single malts produced at this distillery are known for being pretty damn smoky. And it’s not just a campfire, as the distillery likes to tout the iodine, seaweed and medicinal notes that define the whisky. Love it or hate it, peat is at the core of the flavor profile of all the liquid that comes out of Laphroaig, but it plays a different role depending on the expression. Generally, I find that a long sherry cask maturation will soften the smokiness, while a long bourbon maturation might also do so but in a less pronounced manner.

This new whisky, distilled back in 1987, is still surprisingly smoky, at least on the palate. The nose has minimal peat, with notes of vanilla, citrus and spiced pear leading the way. The palate opens up with papaya, clementine, vanilla custard, burnt toffee, and a touch of iodine and menthol, all backed by a softened but still predominant layer of smoke. The tropical fruit notes that often rise to the forefront in a whisky this old remain in the background, and that’s a welcome change. At just under 50 percent ABV, there’s a little bit of heat here, and the whisky is non-chill filtered to retain maximum flavor.

The subtitle in the name of this new Ian Hunter Series release is “Source Protector.” This is a reference to the Kilbride Stream, the water source for Laphroaig that was so valued by Hunter, the final member of the distillery’s founding family to manage the operation. That’s an important marker in the distillery’s history, but an expensive whisky like this must make its impact known first and foremost via flavor, not story. In that regard, Book 3 is very good, but it is also quite similar to Book 1, a 30-year-old single malt that also spent its entire maturation period in bourbon barrels. This new whisky is three years older, and a completely different vintage, so if you are lucky enough to try the two back to back, it should be interesting to see how they compare. But even on its own, this new luxury release from Laphroaig is a delectable dram with no gimmicks—just a lustily peated single malt classically aged in bourbon barrels for a third of a century.