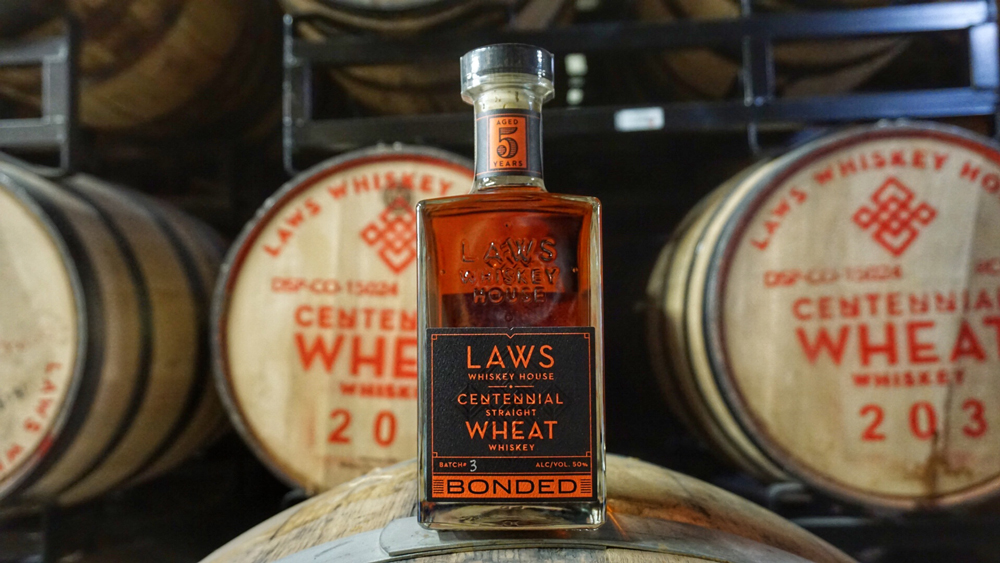 If you corner a Pappy fan—or, perhaps, they corner you—they’ll extol the virtues of wheat in their favorite whiskey. In general, using wheat in the recipe is thought to bring a sweetness to a party that’s familiar to fans of wheated bourbons like Pappy Van Winkle and Maker’s Mark, which deploy wheat as a secondary flavoring grain instead of rye. Though its less common here in the States compared to bourbon and rye, there’s a whiskey that makes wheat the main event instead of a supporting act, where it comprises at least 51 percent of the mashbill. Despite notable examples like Woodford Reserve Wheat Whiskey, Bernheim Original and Dry Fly Straight Wheat Whiskey, the number of American wheat whiskeys remains small.

Colorado distillery Laws Whiskey House is also a member of this club, having recently released the third iteration of its Bonded Centennial Straight Wheat Whiskey (the first came out in 2019). Laws is a really interesting craft distillery that marks a decade of existence this year, and distills and ages all of its whiskey itself using grains grown at partner farms that have a longstanding relationship with the distillery. This new wheat whiskey offers an intriguing and unique sipping experience with some notable features. First of all, the mash bill is not just majority wheat, it’s 100 percent Soft White Centennial Wheat (raw and malted) grown in southern Colorado’s San Luis Valley at Cody Family Farm and Colorado Malting Company. According to the distillery, this heirloom variety of wheat results in a “soft and floral whiskey,” but we’ll get to the tasting notes in a bit. It was aged for five years and eight months in 53-gallon charred oak barrels. As you can see from the name, this is a bottled-in-bond whiskey, meaning it comes from one distillery and one distilling season, it’s aged for at least four years and it’s bottled at 100 proof.

Bonded Centennial Straight Wheat Whiskey really brings a different flavor profile to the category than you may have experienced with some of the aforementioned examples. Anise is one of the notes that immediately jumps out at you, along with a soft woodiness and some baking spice, although not with the sharper edge associated with rye in the mash bill. The palate develops into some sweet apricot and vanilla notes, and finishes gently despite its 100 proof. This is a whiskey that has been aged for a decent amount of time in full-sized barrels, so there really aren’t any of the young wood notes that often permeate craft products that are less mature and spend their time in smaller casks.

Will this whiskey replace your hankering for bourbon? That’s unlikely, but it’s also not the point here. The distillery’s website recommends trying this in a highball, and that seems like a good way to use this unconventional whiskey in a cocktail. But I’d recommend sipping this one on its own, at least at first (keeping in mind you should drink your whiskey any damn way you want to). The skill and thoughtfulness of the team at Laws is very evident in this release, as it is in nearly everything I’ve tried from the distillery. Only 14 barrels were dumped for this bottling, so grab one while you can to see where the wheat takes you.