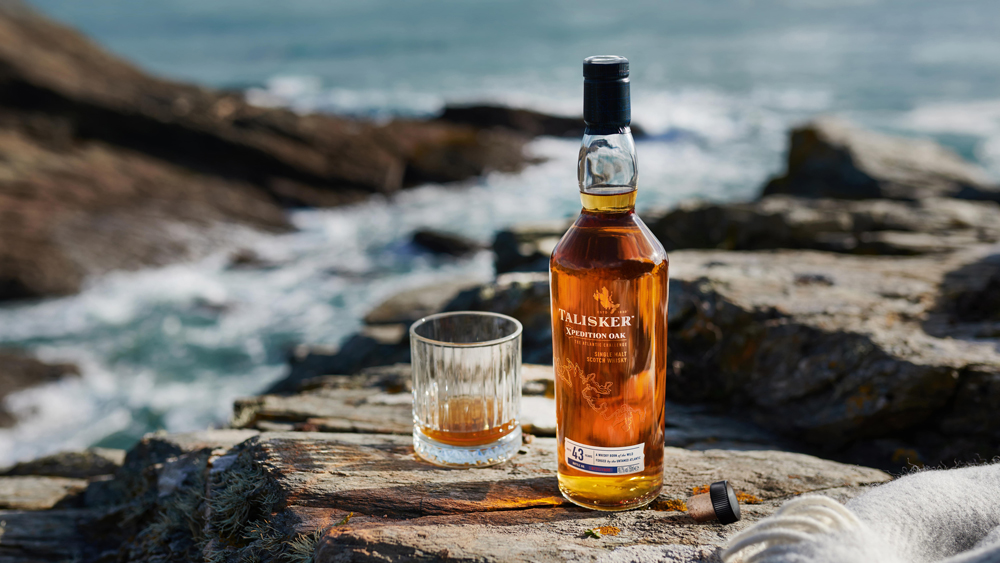 One more time for the people in the back—old whiskey doesn’t equal good whiskey! But it does mean expensive whiskey, or in this case, whisky, as we’re talking single malt scotch here. That being said, a carefully monitored, decades-old whisky can be rather delicious, although the dominant notes often have a throughline from bottle to bottle: tropical fruit, dry tannic spice and a healthy dose of oak. Usually, a lengthy age statement is enough to get whisky fans with deep pockets salivating to procure a bottle, but sometimes a gimmick can activate pleasure centers as well. Such is the case with the oldest expression of Talisker released by the distillery to date, a 43-year-old single malt that underwent a special secondary maturation.

The whisky comes from just ten casks with a yield of 1,830 bottles, a number that is also meant to honor the distillery’s founding year, and bottles are priced at $4,000. Here’s the hook—the whisky was finished in casks that were made in part using 100 wooden staves that crossed the Atlantic Ocean. Adventurer James Aiken took these staves onboard his yacht Oaken Yarn as he followed the path of the annual Talisker Whisky Atlantic Challenge, a 3,264-mile voyage that took 24 days to travel from La Gomera, Spain to Antigua. The staves were then sent back to Scotland and inserted into casks for an unspecified finishing period, ten staves added to each of the ten casks.

This of course raises the question: What effect did this nautical journey have on the wood, and in turn what effect did that wood do have on the whisky? I honestly don’t know the answer to that, but supposedly the salty spray of the ocean seasoned the staves and added notes of brine and daring. The whisky itself is quite good, with the tropical fruit notes actually subdued considering its age, the smoke that the distillery is known for on the softer side, and prominent notes of green apple and relatively big spice on the palate. But it seems like this cask finish is more symbolic than substantial, which makes sense given the liquid’s age and scarcity. That being said, $4,000 is kind of a bargain considering that some whiskies aged for a similar amount of time might cost closer to 50 grand.

Talisker will auction off the first bottle of Xpedition later this year to benefit Parley for the Oceans, an environmental group dedicated to preserving marine life and the world’s oceans. And whisky and wilderness fans can register online here to try to win a three-day land and sea adventure with Aiken around the Isle of Skye in 2022 (dates TBD due to Covid-19), along with a distillery tour and presumably some drams of whisky. But if you’d like to sample this 43-year-old single malt for yourself, better jump on it now as supplies are pretty limited.