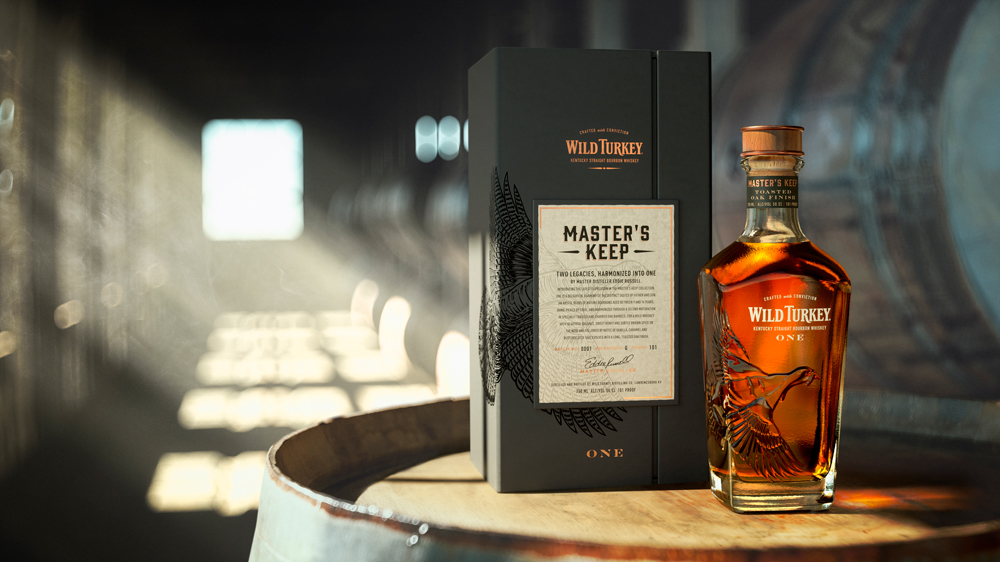 There has been so much talk about toasting in the whiskey world over the past few years, you’d think people were talking about breakfast food or wedding receptions. But in this case, the topic is toasted barrels, something that brands like Michter’s and Elijah Craig have been using for special releases in which whiskey is put into a barrel that has been toasted and sometimes also charred (as opposed to just charred) for a secondary maturation or finishing period. Remember, bourbon must be aged in new charred oak containers (virtually always barrels). According to distillers, charring the barrel opens up the wood to allow more interaction with the whiskey, releases flavor compounds like vanillin, and acts as a filter to remove unwanted notes. Toasting a barrel subjects it to less heat for a longer amount of time, resulting in a cask that will have a more subtle effect on the whiskey, thus making it a good candidate for finishing.

Which brings us to the new Wild Turkey Master’s Keep One release. Master’s Keep is the most premium lineup of whiskeys from a brand much better known for putting out solid, affordable bottles like the classic 101. Past releases have included a 17-year-old bourbon and a rye whiskey aged between nine and 11 years. This year’s release is called One, and is supposed to represent the influence that father and son master distillers Jimmy and Eddie Russell have had on this venerable distillery. According to the brand, Jimmy has always been a fan of whiskey aged between eight and 10 years, while Eddie prefers his a little older. To that end, One is a blend of bourbon aged between eight and 10 years and some 14-year-old whiskey, which was then finished in new toasted and charred barrels in the Tyrone G warehouse, supposedly one of Eddie’s favorites.

That last step can be a “make it or break it” moment for some whiskey fans. There have been toasted barrel releases that I have thought pushed the flavor profile into weird, aggressive territory, adding a burst of unwanted tannin and raw oak. Fortunately, Wild Turkey seems to have gotten it right here, although this is certainly not my favorite whiskey of the Master’s Keep series. The nose is spicy and a bit oaky, with just a little bit of pleasant burn at 101 proof (just like the core expression). The toasted oak definitely comes through on the palate, with cherry, spicy pear, pepper and caramel notes.

I’m still not completely sold on the toasted barrel finish concept as a whole, and I’m sure this would have been a lovely whiskey without it. Also, there’s very little chance you are going to find this for the recommended price of $175, so be prepared to fork over double or triple that if you find a bottle. While this is a good whiskey, I’m not sure it’s worth $500, except for the most diehard Wild Turkey fans (and you know you’re out there). Still, it’s a good bourbon, and an interesting take on the classic Wild Turkey flavor profile, so raise a glass and toast to the toasted.