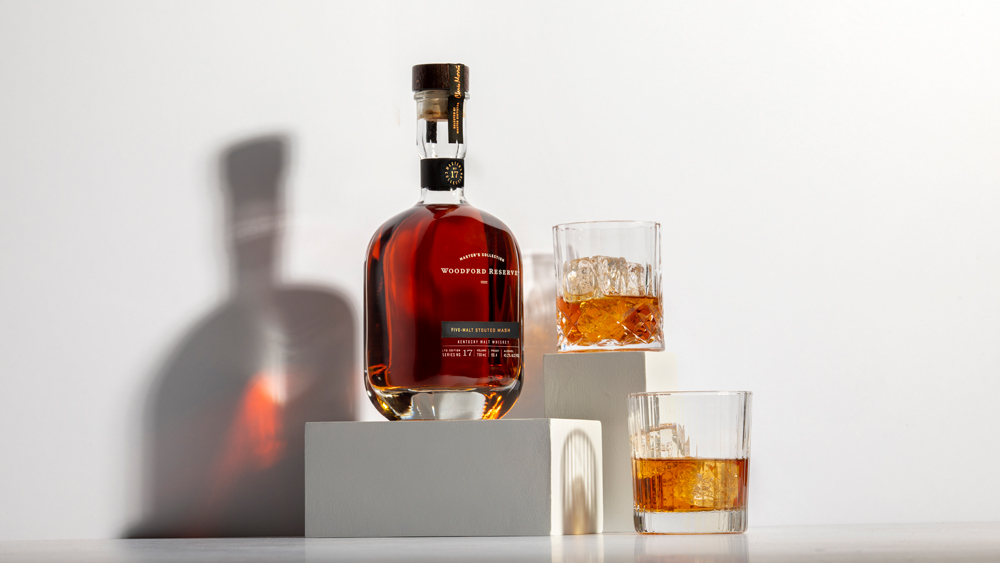 If you’re a bourbon drinker, you’re almost certainly familiar with Woodford Reserve, but this new whiskey from the distillery is utterly and fascinatingly unrecognizable. The brand, owned by beverage giant Brown-Forman (Jack Daniel’s, Old Forester), was created in the 1990s and is well-regarded for its bourbon in particular, but also rye, wheat and malt whiskeys. Master distiller Chris Morris and assistant master distiller Elizabeth McCall take great pride in these expressions, touting the “five sources of flavor” that go into the Woodford profile. But they also like to spread their creative wings a bit, and the Master’s Collection offers that opportunity. The brand-new Five-Malt Stouted Mash is the 17th release in the series, and requires some explanation.

The inspiration for this malt whiskey came from two things, according to the brand. First, there’s Woodford’s peripheral Irish ties, namely that the original distillery on the site was made by Irish stonemasons back in the early 1800s, and the fact that the whiskey is distilled onsite in triple pot stills like Irish whiskey (whiskey is also distilled in column stills at Brown-Forman’s Shively location). Second, American whiskey is made from what is known as distiller’s beer, which is the mash of fermented grains that is subsequently distilled into a spirit and then aged in barrels. So this all brings us to this singular new release that has more in common with other beer-adjacent craft whiskies than anything you’ve tried from Woodford before.

The nose is full of dark fruits, espresso and chocolate notes, with an underlying maltiness. Take a sip and the palate expands into rich toasted nut and cocoa notes, with some caramel, banana and, as expected from the name, rich, dark stout beer flavors. This comes from the five malts used in the mash bill for this whiskey—Distillers Malt, Wheat Malt, Pale Chocolate Malt, Carafa 1 Malt and Kiln Coffee Malt. While the proportions are not revealed, Woodford reps say the percentages of these malts range from 70 percent to just over one percent in the mash bill, depending on impact on the flavor (“For some of the malts used, a little goes a long way”).

The result is a remarkably stout-like whiskey, but minus the hoppy notes you’ll find in some others of this ilk. This is a whiskey for the nerds, the fans who really want to break out of the mold and explore different flavor profiles. At 90.4 proof, just like the original bourbon, there is a touch of heat but it’s subtle, not aggressive. This is a sipper, not a mixer, and may take some time getting comfortable with, but it’s definitely worth a taste if you can find a bottle. It looks like it’s already going for well above its $130 asking price, but give it a spin and see what you think. You won’t be reaching for this every time you want to wet your whistle, but it’s a nice choice when you feel like branching out.