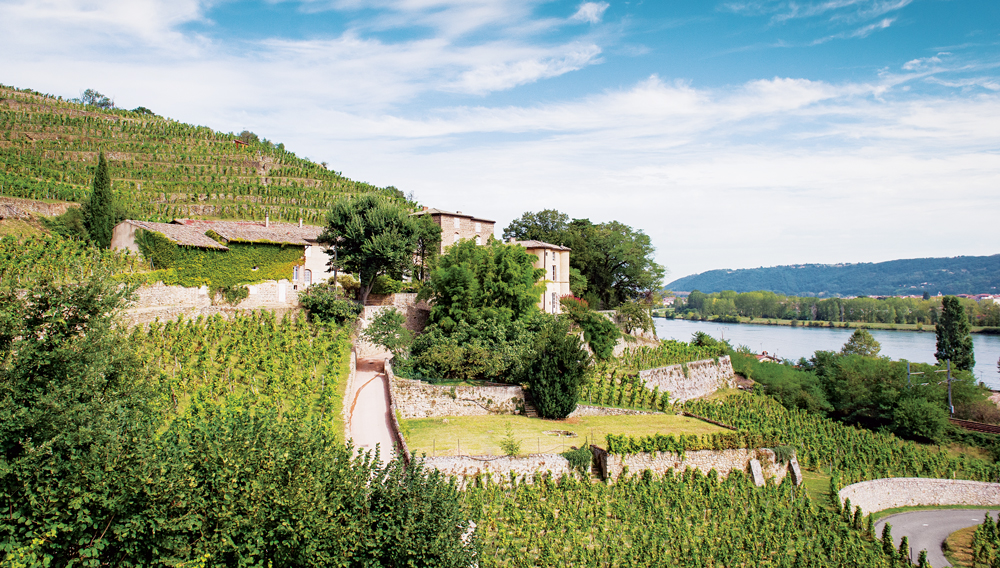 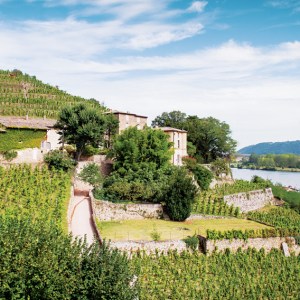 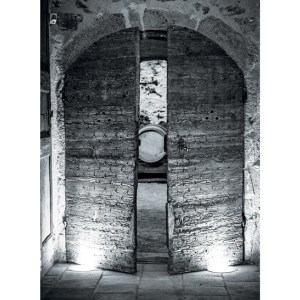 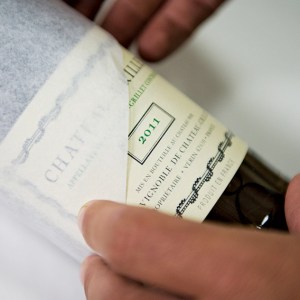 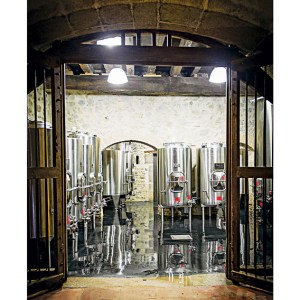 Château-Grillet is restored to its former glory thanks to its new owner and his team at Château Latour.

Winemaker Alessandro Noli and I chat at the shaded end of a narrow lane that leads to a farmhouse compound below a natural amphitheater of stacked terraces planted with rows of gnarled grapevines. As Noli turns and leads me down a sand-and-gravel path, I notice that the vineyards and jumbled red-tile roofs perched above the Rhône River appear indistinguishable from the dozens of other, similar properties that populate the hillsides of this mountainous region near the town of Vérin, where Côte-Rôtie remains the reigning red and Condrieu rules among the whites. Nevertheless, the terraces and weathered buildings serve as the source of one of the most historically revered white wines in the world. Since the third century, this south-facing enclave above the waters of the sweeping river has nurtured vines in its well-drained ­granite-and-clay soils. In fact, the French government recognized the uniqueness of this small, 9-acre parcel in 1936, when it granted Château-Grillet its own appellation.

During the eight decades since, the château saw its once-sterling reputation tarnish, as the property was mismanaged for generations by the family that acquired it in 1830. Although some critics have decried the acquisition of family-owned wineries by large business concerns and conglomerates, even these ardent detractors would be hard-pressed to deny the benefits accruing from the purchase of this viticultural jewel by François Pinault, whose holding company, Groupe Artémis, is the primary shareholder of the French luxury-goods company Kering. Artémis has also built quite an impressive portfolio of wine holdings, having bought first-growth Château Latour in Bordeaux in 1993, the Burgundy legend Domaine d’Eugénie in 2006, and Araujo Estate in Napa Valley in 2013.

“I came here from Burgundy in July 2011, right after Mr. Pinault bought the property,” says Noli, who is quite familiar with Pinault’s business dealings: Noli began his career as a lawyer in Lyon, and the French billionaire was his client. Noli’s interest in wine inspired him to quit the legal profession in favor of studying oenology in Florence, Italy. Thereafter, he landed one of his first jobs—not surprisingly—at Château Latour. Later, Pinault sought his assistance at Château-Grillet. The team immediately overhauled the winery and completed a new tank room before the first grapes of the 2012 vintage were picked. “We couldn’t do much to change the vineyards that year,” Noli says, “but we rushed to install new equipment for the harvest.”

As Noli opens a wooden door leading into a small, vaulted cellar, I experience a surge of anticipation. Every student of wine has at some time or another heard of Château-Grillet. Essentially an island within the larger Condrieu appellation (whose production is also devoted exclusively to the aromatic Viognier grape), the estate assumed its modern shape in the 17th century, when its first buildings were constructed, and it was even visited in 1787 by the renowned oenophile and then minister to France Thomas Jefferson. Yet despite the property’s fame, relatively few wine lovers have had the opportunity to taste its finished products, and those who have enjoyed that privilege in recent years were generally more impressed with the wine’s rarity than with its superior quality—not bad wines, in other words, but seldom commensurate with the château’s heritage.

These opinions will likely change thanks to the efforts of Noli, who escorts me down a row of small, gleaming, temperature-controlled tanks. “[The previous owners] weren’t making bad wines,” he tells me, “but they were different than what we wanted to make.”

We arrive at a modest table set with two wine glasses and a tall, unlabeled brown bottle, which I recognize as being unique to Château-Grillet. “This is the 2011, our first vintage,” says Noli as he pulls the cork and pours for each of us. “We haven’t released the 2012, which

was the first vintage where we controlled everything.”

Before I raise my glass to my nose, the light-gold wine sends waves of sharp minerality and fresh- and preserved-fruit aromas upward. I enjoy the heady scents for a few moments, then sip. Peach and apricot, accompanied by hints of crème brûlée, are the most obvious reference points with respect to flavor; still, the wine’s structure sets it noticeably apart from most other Viogniers of the Northern Rhône. Racy and tightly wound, this white remains generous enough in fruit, body, and texture to keep it from being severe.

During his first harvest, Noli and the rest of the Pinault team—which includes the viticulturist Pénélope Godefroy and Frédéric Engerer, who leads Pinault’s entire portfolio of wine properties—decided to take the momentous step of making a second wine, a declassified Côtes du Rhône white called Pontcin. When I ask whether we can taste this latest creation, he regretfully informs me that no 2011 remains in the cellar. I make a mental note to procure my own bottle as soon as possible.

As we continue our tour of the property, Noli enumerates the challenges involved in turning around a wine estate that has lost its way—even one with a modest annual production of only 2,000 to 3,000 bottles. He and his colleagues have accomplished much. In addition to installing the new tanks, the team has fulfilled two of its top priorities: the completion of a gravity-flow system and a water-management grid. The team also instituted a biodynamic regime and selected a modified Guyot system of trellising. The most critical endeavor, however, was the revitalization of the earth itself, which necessitated special digging machines. “The vineyard work was huge for the first three years,” recalls Noli, “because the soil hadn’t been worked.”

Altogether, about 18,000 vines occupy the steep terraces, and each of these must be harvested by hand at the end of the growing season. The vineyard workers gather the fruit in small bins, and the grapes are pressed with the stems intact. Specific blocks, or cuvées, are crushed, vinified, and aged separately, providing a broad palette of different wines for blending. Natural fermentation without enzymes begins in tanks before the wine is transferred to oak barrels, no more than 20 percent of which are new. “We try to let malolactic occur naturally,” says Noli, although he adds that he will intervene if necessary. Routine battonage (stirring of the lees) is performed for the first few months of the 18 total that the wines remain in barrel. Light filtration takes place before bottling.

As our walk through the property concludes, I say good-bye to Noli, still determined to lay my hands on the elusive Pontcin. The following week, I contact Jean Garandeau, head of marketing for the Pinault estates. “We are just getting ready to release the 2012 Château-Grillet,” he informs me, “and the 2013 Pontcin just after—although I’m not sure ‘release’ is the right word for Pontcin, as there is so little of the 2013. And there will only be about 2,500 bottles of 2012 Grillet. Of course, everything is on allocation.” He tells me that the estate has two U.S. distributors: Atherton Wine Imports on the West Coast and HP Selections on the East Coast. “You might still find a bottle of 2011 Pont­cin in New York,” he suggests.

Happily, I do. At Vintry’s in lower Manhattan, this Côtes du Rhône retails for $59 per bottle—a bargain in comparison to a bottle of Château-Grillet 2011, which sells for about $250. Subsequent vintages are likely to command higher prices still.

I decide to savor my Pontcin on a quiet Saturday afternoon at home. I pull the cork from the bottle, whose sloping form is green rather than brown. In the glass, this wine exhibits neither the intense aromas nor the profound structure of Château-Grillet; yet on consideration, I am far from disappointed. This remarkable white is amazingly complex and enjoyable in its own right—full bodied with layers of toffee, cream, tropical fruits, apricot peel, and citrus, with a long, honeyed finish, good acidity, and light tannins. More mesmerizing than these sensations, however, is the Pontcin’s ability to transport me. As I sip, for a brief few moments I stand once again before the vine-and-stone amphitheater, the sparkling waters of the Rhône below me, contemplating the past and future of Château-Grillet—which, under the stewardship of Pinault and his associates, continues to flourish.